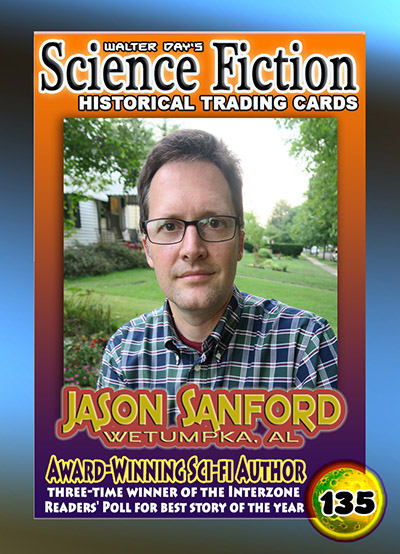 Our next Trading Card Spotlight features Jason Sanford, who is displayed on card number 135 from the Science Fiction Collection.   As a Science Fiction writer, Jason is a two-time finalist for the Nebula Award and has received a Minnesota States Art Board Fellowship.  Jason has previously worked as an archaeologist and is a former Peace Corps Volunteer.  A collection of his short stories were published in 2011. Jason co-found the literary journey storySouth, where he ran the Million Writers Award for best online fiction.  He also writes a column for Czech Science Fiction Magazine.

I think the writing world has opened up massively since I was younger. Now there are large numbers of ways for a writer to reach their audience, from traditional publishing to self-publishing to apps and podcasts and much more. I think that has helped opened writing to many new audiences and participants and is a great thing. 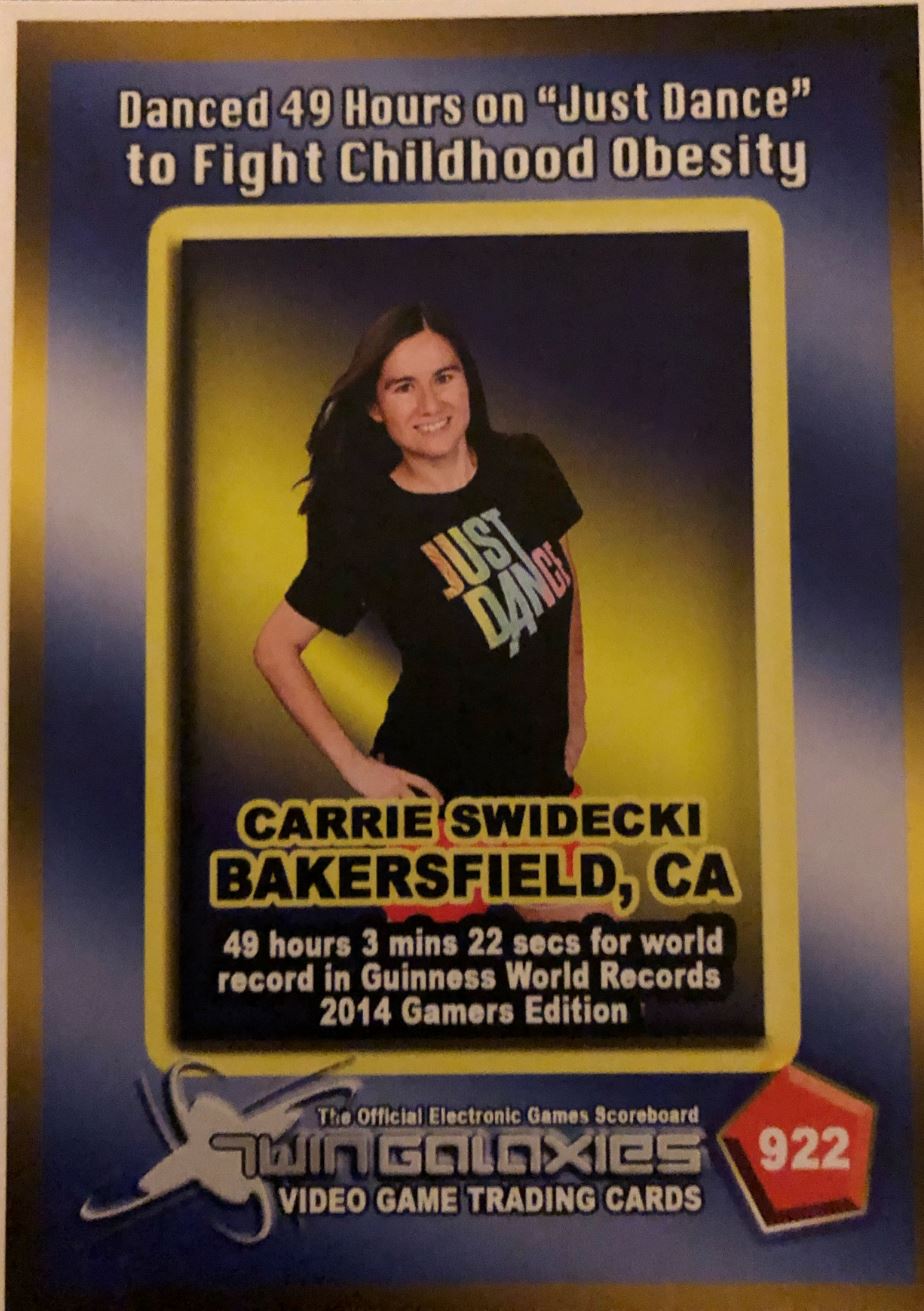 Our next Trading Card Spotlight features Carrie Swidecki, who is displayed on card number 922 from the Superstars of 2014 Collection.   Carrie Swidecki is a Multi Guinness World Record Holder who is best known for setting the overall longest video game marathon of all time by playing Just Dance 2015 for over 138 hours.  Carrie made history becoming the 1st female to set the Dance Dance Revolution marathon world record by playing Dance Dance Revolution for over 15 hours at the US Obesity Prevention Summit in Charleston, West Virginia. She raised over $7,000 on twitch for the Children's Miracle Network hospitals while she set the overall longest video game marathon of all time. Carrie was inducted into the International Video Game Hall of Fame in October in Ottumwa, Iowa.

As a kid, I grew up playing pinball at the bowling alley where I was on a bowling league. In between my turns I would rush over to the arcade to play the Creature from the Black Lagoon Pinball Machine. Every Sunday, my parents took us to have pizza at various Pizza restaurants. I loved hanging out in the arcade area and I used to have the arcade inventory memorized at each Pizza place. When I was 5 years old my parents bought the Atari 2600 console for us. My favorite game was Pitfall. The 1st game I stayed up all night long to marathon and finish was Bubble Bobble with my brother at my Aunt’s house. I loved the Paddle controller for games like Kaboom and Circus Atari. Later, my mom bought us the original Nintendo console. Every Sunday, my mom took us to the Nintendo aisle at Toys R Us. I could stand there all day long and just admire the box art. My favorite game on the original Nintendo is the Legend of Zelda and I loved Tetris on the original Game Boy. When I was 23 years, I rediscovered myself in the arcade with Dance Dance Revolution. I fell in love with the community and world record dreams began. 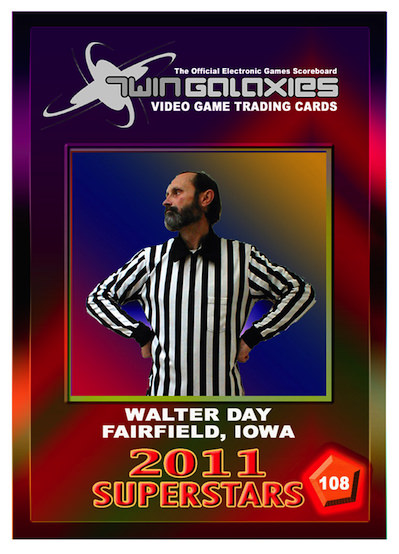 It has been almost 3 years since I have written my first Trading Card Spotlight.  I have tried to feature a trading card once a week since I started.  With 125 trading card spotlights completed, it was only fitting to feature the man himself, Walter Day as the 3 year anniversary of the Trading Card Spotlight.   Walter was kind enough to answer some questions for the article, some which were provided by the gamers themselves.

Our next Trading Card Spotlight features Walter Day who is displayed on card number 95, from the Superstars of 2011 Collection.   Walter is also featured on cards 108, 523, 539, 591, 775, 1000, 1021, 1859, 2133, 2149, 2261, 2292, 2321, 2390 and 2462.   Walter’s visions include starting up the famous known brand of Twin Galaxies back in 1982.  He opened his arcade in Ottumwa, Iowa to current and future Hall of Famers when they were just kids.   He had his arcade and town declared the Video Game Capital of the world.  His gamers were featured in the Time Life Magazine issue taken in Iowa that gamers come to know as the birth place of the classic gamers.  Over the years, Walter has traveled all over to referee, issue awards and just give his insight to the gaming communities across the country.  His vision of Video Game trading cards and the idea of featuring and documenting gaming history came to realization in 2011 when his first batch of cards were printed and distributed.   Almost 8 years later there has been over 1800 cards printed and counting.    Walter can be seen at many events and conferences spreading his vision and trading cards, posters, and awards.   He is also focusing on his music career and writing of science fiction novels in his spare time.

What is your vision of the future of the Walter Day Trading Cards?

I see the card set as an invaluable resource for future historians to study the video game culture of the 20th & 21st Centuries. The card set tries to identify people and historic events that were important but which might be overlooked by the history books. There are so many stories to tell that I can see the card set encompassing more than 5,000 cards. This applies to the Fairfield and Science Fiction sets, too. 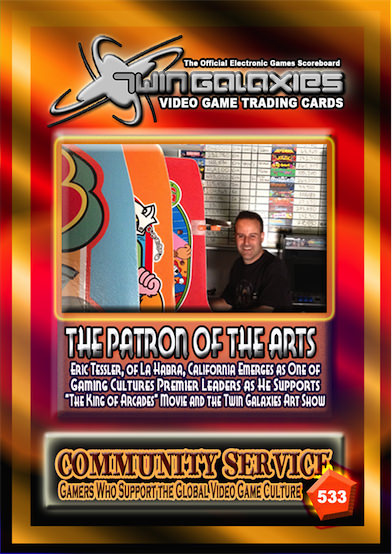 This week we look back at an interview I did with Eric Tessler.  Eric is a key supporter of the trading card history.  He has dontated his time and money on countless occasions to keep the Walter Day Trading Cards growing. He also is a great gamer himslef.   We look back to January 23rd, 2016,  I hope you enjoy. 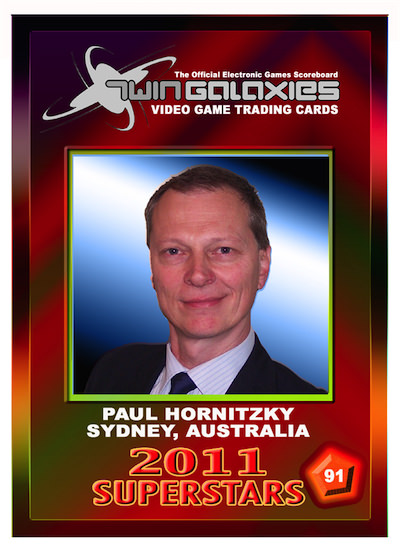 Our next Trading Card Spotlight features Paul Hornitzky who is displayed on card number 91, from the Twin Galaxies Superstars Collection of 2011.  Paul grew up in the Golden Age of Video Games.  When Arcades and Pinball were all the rage back in the 1970s and 1980s.  Paul would go on to break world records on such games as Discs of Tron, Pengo, and Blaster. Paul is from Australia and finds time to game with his call sign of “OOO”.

Video games were an exciting new frontier when they were first created with its own evolving universe. I was lucky to be there when it all began, in the 70s and into the 80s, seeing and playing my first video game which was the mighty Pong. And then “I was there” for all of the hundreds of games made until today. That’s 46 years of gaming experience, memories and good times. I was video gaming 9 years before Twin Galaxies was even born and the later scoreboard created. So here are my top 5 thoughts and impressions of the term “video games” and what it means to me.