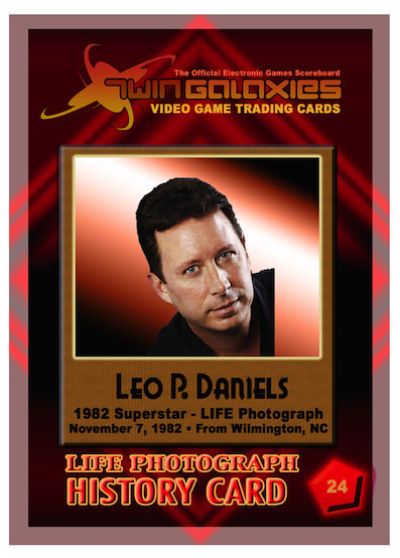 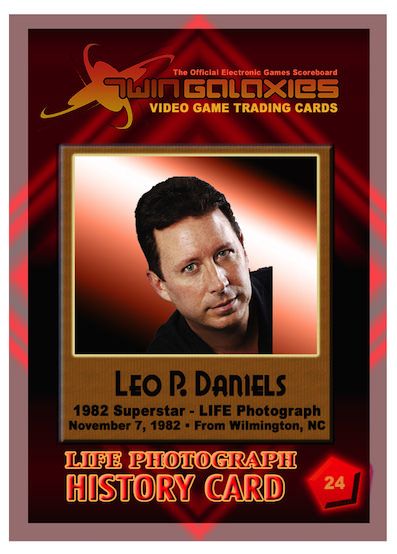 Our next Trading Card Spotlight features Leo Daniels who is displayed on card numbers 24 and 24A from the Superstars of 2011 Collection.  Leo is also featured on card number 2777. Leo is one of the first video game players to receive national recognition in 1981. His claim to fame was his brilliant playing of Asteroids and Robotron.  He was one of the original gamers to play at Twin Galaxies arcade back in the early 80’s. Leo was one of a handful of gamers to be featured in the famous Life Magazine photo shoot in Ottumwa, Iowa in 1982. Leo was also featured in the gaming Documentary “Chasing Ghosts: Beyond the Arcade.”

Today’s generation of arcade games have both come a long way and also have dwindled down. You don't see as many true arcade games even in the biggest of arcades, most of the games now are ticket redemption games. The large arcades have the huge multi player arcade games with amazing graphics and VR play. There's nothing like the coin-op arcade classics of the 80's really.

I first played pinball at the age of 5. My dad put a milk crate in front of the machine so I could reach the flippers. My first arcade experience was a huge arcade just known as "The Boardwalk Arcade" at the boardwalk in Carolina Beach NC. I would visit that arcade from the age of 6 until I turned 14 which is when I started my very first real job at that arcade. I helped with coin jams and getting prizes.

What was your funniest memory of the original Twin Galaxies Arcade?

My funniest memory at the Twin Galaxies Arcade was where I was confronted and was told there's no way possible my 3 million score was real or achievable. That was when everyone found out, not only was it real, but I flipped the game over at 10 million. Although I could've kept it going even further, I thought it was funny that I proved my point. No, I didn't cheat or just make up a score, I did however exploit an error in the game code which I could do on any Tempest machine until they started replacing the chips. I still enjoy playing the arcade classics to this day. I have about 80 classic games in my business Pachinko World as well as over 1000 pinball tables to play from the 1940's to 2018.

Did you learn anything from playing arcade games as a young kid?

I learned playing video games increased my eye hand coordination when I was a kid and I also learned from others mistakes which saved me a lot of quarters back in the day.

Some arcade games are great for relieving stress, others increase your stress when they don't play like they should, or the game doesn't cooperate.

Never thought of any trading cards for video gamers. Although being featured in Life Magazine was quite an honor.

I actually have gotten a LOT of media coverage throughout the years for setting records and raising money for charities, but to date, I haven't gotten any media coverage for being on 2 trading cards

I first met Walter day back during the very first publicized video game tournament East coast VS West coast, NC VS California. Walter actually came down to Wrightsville Beach NC at my arcade Lightyears Amusements and refereed our players.

What was the secret of success for your high scores in Asteroids?

I used the fly by method for playing and mastering Asteroids. That's where you shoot all the asteroids but 1 or 2 slow moving ones and then keep flying up the screen only to let off the thrust and turn to shoot the saucer when it would appear. They came out with a speedup kit and Atari still recognized my scores on that because they said the kits made the game harder to play, when in reality, it wasn't really harder for me, it just meant I could score much faster.

One word to describe Walter is hard, I'd have to use more than just one. I guess the main word would be Eccentric, followed by Kind, and Determined. He's one of the kindest people I've ever met, and he was determined to bring video games to the forefront and make the players famous.

I really don't have a portable gaming device that I've used in recent history unless you count my phone.

It's hard for me to just choose one genre, I like them all from the 1980's If I could have just ONE arcade game? That's IMPOSSIBLE I can't just have just ONE lol. I've always owned several arcade games since the 80's. Arcades unfortunately are a dying breed. You see fewer and fewer of them other than the big Dave and Busters and even those are 90% redemption games.

What was your fondest memory of the TIME Life Magazine Photo shoot?

My fondest memory was how cold it was that morning of the shoot and how Billy Mitchell was making out with some chick all night long and showed up with huge hickies all over his neck.

Do you believe some Arcade games are too violent and lead to violence in America today?

I've never blamed ANY game for violence and was one of the first to fight against that. Matter of fact, I was the ONLY player quoted in the Life Magazine spread calling the surgeon general a QUACK! I do however think that parents should not buy games like GTA for their kids under 16.

Some games I enjoy playing alone, but I've always loved competition and still love playing my friends today on pinball or even Mr.Do.

You'd need to pick a decade for that answer.

I don't really have a favorite arcade game character, I use to love Sonic the Hedgehog when I was younger, I also loved playing as Ogre on the Tekken series because I would slay anyone that played against me.

What springs to mind when you hear the term ‘Arcade’?

When I hear "Arcade" I think of the classic arcades hat I grew up with.

What is your opinion of the ‘Chasing Ghost’ documentary?  Have you been featured in any others?

I thought Chasing Ghosts: Beyond the Arcade was well done and I enjoyed being a part of it. I was featured in KOK in the archived footage.

I still actually love pinball more than ANY video game so for me to choose my favorite arcade game would be difficult, there's a LOT of pinball tables I enjoy.

If I could design my own game, it would be a fast action pinball machine with a great soundtrack. If I designed a video game it would be space shooter, so no real character would be involved.

If you could have just one arcade game, what would it be?

Arcades unfortunately are a dying breed. You see fewer and fewer of them other than the big Dave and Busters and even those are 90% redemption games.