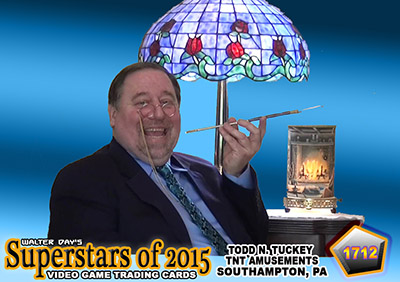 Our next Trading Card Spotlight features Todd Tuckey who currently is displayed on card number 1712, from the Superstars of 2014 Collection.  Todd is the owner of TNT Amusements, Inc. located in Southampton, PA. Todd started TNT in 1979, and then began home sales from his driveway in 1984, and now 41 years later has become the largest used game showroom in the world.  Selling over 25,000 pinball and arcade machines, Todd is the go-to guy for anything game related.  If you need parts or a full working cabinet, TNT can accommodate.  Todd also has over 1,000 YouTube videos on TNT’s YouTube Channel, where he uses his famous sense of humor to pursue his business/hobby in the industry.  You can always see Todd and his items at the many gaming conventions he attends.

When did your business open and how was the initial response?

I bought my first machines to put on location in 1979, although I was buying and working on games back to 1975 with my Uncle’s campground for his game room.  The home sales business was literally born in 1984 in my driveway in early August when my partner and I needed capital. We had many games sitting idle in my garage, and I rolled some of them to the end of my driveway with a large FOR SALE sign on them!  And THAT pretty much started our home sales, selling 400 machines from my driveway for the next four months!

What does it take for someone to be in the amusement business today, and what advice would you give a person who would like to get into the industry?

Patience and passion are your two main ingredients to be in this business.  Many long hours per day will also be necessary to get your business running right.  Consistent upgrades and additions to keep things fresh.  You must also include Internet sales to survive, even selling parts, keeps the cash flowing.

The first machine I owned was when I was 16 years old and it was a Criss Cross pinball machine.  The fascination of the mechanics was what lured me in originally.  Then my Uncle asked me to buy games for his campground and that got me started.

I was surprised when I was offered the card and honored!

Do you prefer arcade or pinball machines and why?

Although I do love Pinball, my heart is in the classic arcade video games.

Is there still a demand for Skeeball machines and how have they evolved over the years?

After 100 years, the original Skeeball Company closed, selling the name to Bay Tek. They abandoned all the Skeeball electronics and installed their own, only retaining the actual name.  There are only so many places that can hold a machine this size.  It takes up a lot of “real estate” in an arcade and the income it makes may not be acceptable for the location to keep more than a couple machines.  This is probably why Skeeball closed.  We sell perhaps ten Skeeballs a year, demand is never strong, and biggest issue is fitting it into the home if there are steps!

What is the rarest game you have sold or owned in your business and what makes it rare?

I still own it, a Sega DIGGER made in 1979.  I bought it brand new on a closeout for $500.  It was a cocktail table.  I placed it into a night club and after two weeks, someone sat on it and one leg pulled off, so out it came and has been in my house since 1979.  It is a two-player interactive game where you can team up with the other player or be independent and dig holes to protect you from the blind crabs that are moving around the field.  It has completely random mazes that never repeat.  The game is set up that you need 5 scoops of your shovel to dig the hole and then when crab falls in, 5 scoops to fill it in.  The crab itself will make 8 pulsing sounds starting when it falls in…and then if you don’t have the last scoop to cover him, the crab is released.  It will either head in your direction and kill you or move the other way.  Hours and hours of fun we had playing this game.  Plus, what’s interesting is I have only seen one upright machine that ended up being converted to another game and no other cocktail tables.

If you were not in this business today, what would you be doing instead?

I would be involved in the movie business. I enjoy editing and filming, as my 1560 YouTube videos will attest to!

Where do you see arcades and amusement in the next 10 years?

Flat Rate Arcades will continue to grow around the world and people looking for fun entertainment that does not require constant fussing with card swipes and coins.  Combing food and drink and snacks, and also other forms of games (home consoles), these arcades will keep thriving, as new players discover the classics.