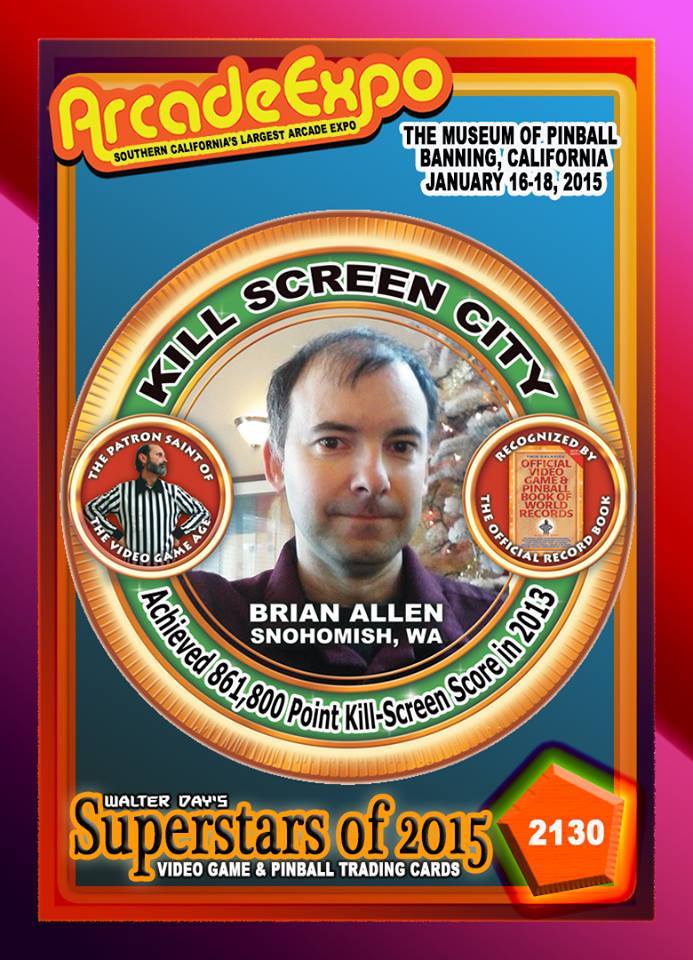 Our next Trading Card Spotlight features Brian Allen, who currently is displayed on card number 329, from the Superstars of 2012 Collection. Brian is also featured on cards 2130 and 2466. Brian is considered one of the best Donkey Kong and Donkey Kong Junior players in the world.  He has accomplished the well-known ‘Kill Screen’ many times in Donkey Kong. He has his name in the record books for Donkey Kong Jr and Donkey Kong 3. Brian has had a personal tournament named after him called the ‘Allen-Off”.  This battle between Allen Staal of Australia and Brian Allen of the U.S.  Look for Brian at some of the Kong Off tournament, as he will surely be up there in the rankings.

If you could own one arcade game besides Donkey Kong, what would it be and why?

I do own 18 arcade and pinball machines in my game room arcade in my house. There is always machines I am wanted but the lack of space and money limits me from buying anymore. I used to own a Space Fire Bird arcade machine. I would love to find another one of those and take the world record on that.

When did you achieve the ‘kill screen’ in Donkey Kong and where was it at?

What is your opinion on console version of Donkey Kong and is that a record you are shooting for?

Donkey Kong console on the Nintendo Switch? Some players have already pushed that score out of my reach right out of the gates.

I enjoy playing today's current games from Monster Hunter world to WWE Champions on my Cell Phone. The current games there is not an end to them. There is always something different and new coming to them.

I used to collect and sold sports cards as a Teenager. I always looked at them and dreamed if I could ever have my own card.

Since getting my own Trading Cards I have been featured on a few different websites and done interviews with PSP, Cat and TG

Walter Day is a Really quiet man. A Man of Mystery. I got to meet him in 2012 at the NW Pinball and Arcade Show. He watched me go for the World Record on Donkey Kong Junior.

As an everyday player of Classic Arcade Games. I Pretty much Retired from Competitive gaming Jan 1st, 2016. I continue to play a serious game of Donkey Kong once a month. I have tried to bring back Classic games competitive events like the Donkey Kong Open in which I started back in 2012. I have hosted Events from Donkey Kong, Donkey Kong Junior, Donkey Kong 3, Pooyan and few others recently. Players have played in these events from around the world. The Goal is to bring back the fun of playing a classic Arcade game during an event.

What does it take to be a world record holder on an arcade game?

It takes a lot of skill and time. There is a lot of watching other players to see hidden things they are doing to add things to your game play.

The first arcade game I ever played was Asteroids. in 1979. I was at this Swimming pool place camping with my family and they had Asteroids and other game there. Game was huge tall machine me being an 8-year-old boy standing up to it.

I enjoy playing games by myself and having my music playing. I enjoy going to the Events NW Pinball and Arcade Show every year and playing games and hanging out with the Fans! Teaching them how to play a game is a great thing to pass down to older and young players.

Over all I would say Capcom makes the best video games.

They are if you are not chasing a score or something. Then things become really stressful.

Mario Jump Man is my favorite and on consoles it is Mega Man!

What springs to mind when you hear the term ‘Arcade Games’?

I think of Retro Arcades and Pizza places from the 80's. Playing that brand-new game in the Arcade was something special. Those kinds of things are completely Lost today.

That would be Donkey Kong Arcade and Multiplayer game would be Monster Hunter World and WWE Champions Cell Phone Game.

If I could make a video game, it would be a Donkey Kong Country type of game with RPG too it and leveling up all the different guys in the game.

Sadly, I do not see them being sold in stores anymore. They will be sold on console websites and what not. I already miss the Kart and everything.