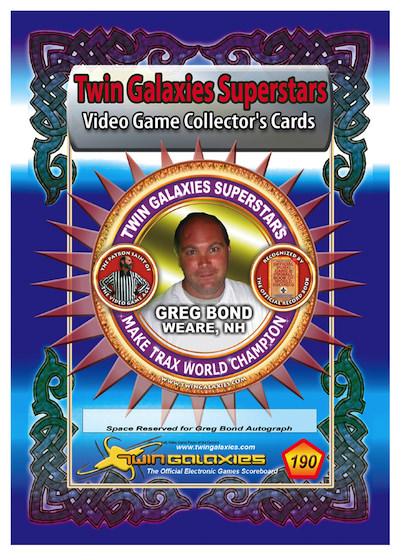 Our next Trading Card Spotlight features Greg Bond, who currently is displayed on card number 190, from the Superstars of 2012 Collection. You can see Greg in the documentary, The King of Kong. Greg was around for most of the movie footage when the Donkey Kong competitions were being held. He is a world champion and record holder at the classic arcades game Mappy and Make Trax.   Also, an avid pinball player, Greg has a love for classic arcades and has been a big part of the gaming culture throughout the years.

I'd like to own a Zookeeper and Millipede or pinball Guardians of the Galaxy. Those games are fast paced and seem to keep your reflexes good!

I don't remember my first video game, I was more into pinball, but the ones caught my eye were Zookeeper, Centipede, Robotron are a few.

Today’s games are more fighting and car games, in my opinion, they don't compare.

No, I never thought I would be on a card, let alone setting a world record.

No media coverage, only a clip or two in the King of Kong movie.

Walter was at Funspot 2001 and watched my Mappy game.

I prefer PC, I practice on MAME.

Currently Zookeeper and some Millipede, seems to be puzzle games for me.

The music helps, it seems to get you rhythm going in the game.

I think it's a combo of all three.

I like the Williams line of games, 2nd would be Atari.

Yes, I think you learn patience.

Yes, they can relieve stress at times.

I think it's ok if done the proper way.

I think of the classics right away, probably because it's what I grew up with.

Yes, I still play some, I’m not sure what role, just none as a friendly guy!

I think they will continue with the style of games they put out now, I don't see much of a change.