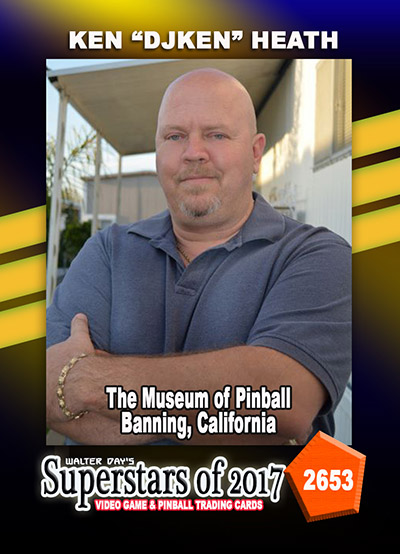 Our next Trading Card Spotlight features DJKen Heath, who is displayed on card number 2653, from the Superstars of 2017.    DJKen is a talented entertainer and technician who dedicated his time and knowledge for the initial building of the Museum of Pinball and production of all its events since its inception in Banning, California.  He also uses his time to make sure all the technology and machines are running smoothly during the events.  Music has brought DJKen to meeting many gaming talents through the years.  He is honored to be a part of the Walter Day trading card family.

I’m doing it. Music has always been a huge factor in my life, I’ve been able to do almost everything I dreamed of as a kid because of music.

I was about eight and it was a baseball machine at a donut shop near my Mom’s work, the ball shot out from under a flap and I had to time when to swing the bat.

What are your opinions about today’s generation of video games? How do you compare them to older classic games?

I find some of the new pins distracting; too many lights and too many levels and you never get to see the ball. The graphics are better, but some of them rely so much on video for continuity they interrupt play.

I first met Walter, (along with Joel West, Billy Mitchell, Imoto Harney, Richie Knuckelz and other industry “Rock Stars”), at The first Arcade Expo (2015 at the Museum Of Pinball in Banning Ca).

I met Kenny Hardy at Juan Sanchez’ ‘Last Arcade On The Planet’ in 2014 and he invited me to come out and see a project that was building. I saw what was developing in Banning, submitted a bid, and became the A/V Contractor-Installer-Operator for the MOP for the next six years.

If you could describe Walter Day in one word, what would that word be?

If I had the room, I’d love to have a “Mach Storm” (Namco)… a very fun and immersive game!

Sure, it’s an amusing distraction from other things and lets your mind wander.

It depends on how they do it. Hollywood can eventually screw up anything good!

Not that I’m aware of, friends have mentioned it on Facebook but that’s about it.

No. I’ve been an entertainer since 1978 and I’ve never been on anything as cool as my own trading card. Being featured on a card was an amazing surprise and honor. I am humbled that Walter cared enough to recognize my work.