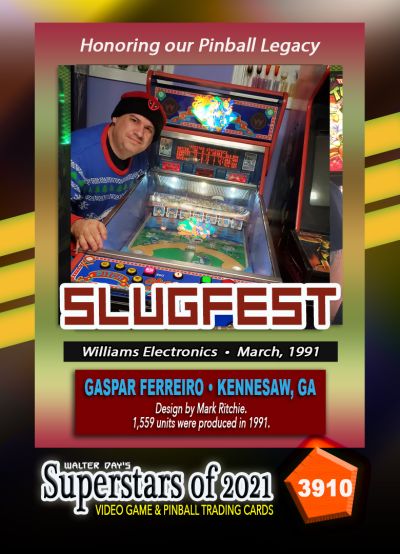 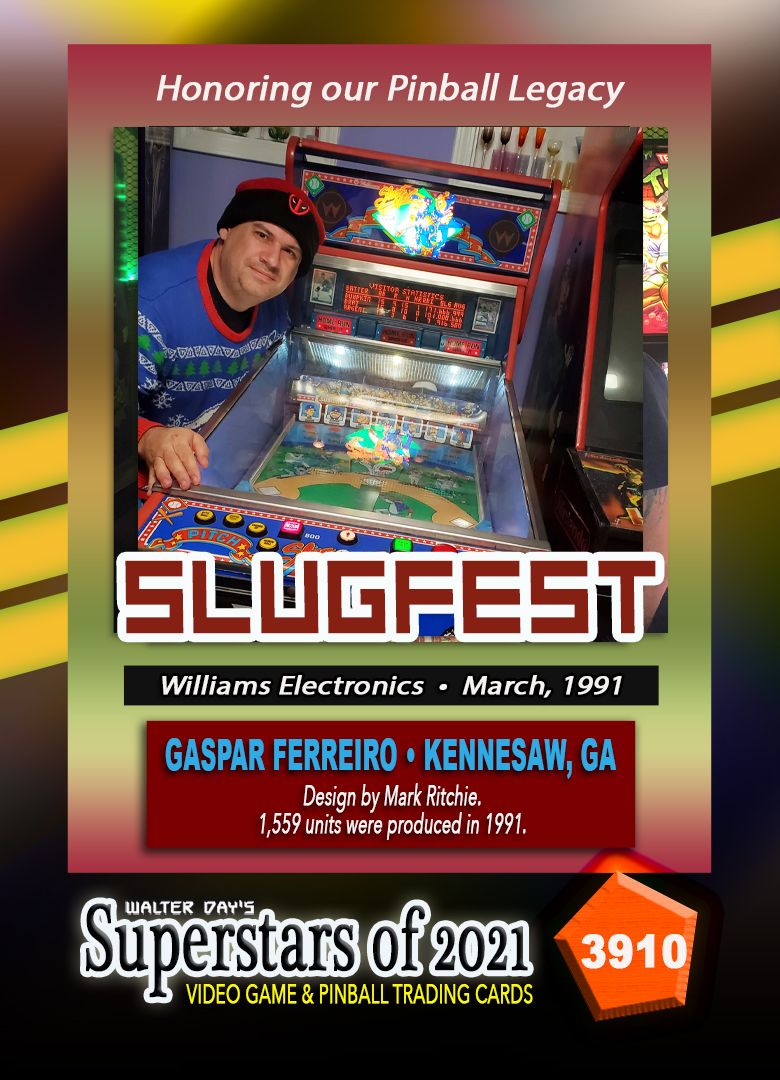 Our next Trading Card Spotlight features Gaspar Ferreiro who currently is displayed on card number 3910, from the Superstars of 2021 Collection. Gaspar’s pinball game of choice is Slugfest. If he could design his own pinball machine, he would love to do either an 80’s band pinball with music and toys from Motley Crue, Deff Leopard, etc., or something similar with an 80’s new wave theme like Frankie goes to Hollywood, ABC, the cure, OMD, etc. If Gaspar could own only one pinball game it would either be Guns and Roses, or else, Jurassic Park by Stern.

Nope.  I do not believe they had video game cards in the 80’s (or at least, I didn’t see any), so I would have never imagined being in one either.

I have not had the pleasure to meet him yet but look forward to the day.

I really like the 90’s pinball machines, with their fancy toys and dot matrix displays.  All the cool license tie ins are also a big plus!

In your opinion, are there enough or too little Pinball Expos and conferences held each year?

I think the amount is about right but would love to have a few closer to my hometown.

They serve a great purpose of preservation and allowing younger generations to try some old classics, but at the end of the day, NOTHING COMES CLOSE TO THE REAL THING.

Not sure if it was the first one, but I recall playing High Speed and Monte Carlo in the 80’s and loved it.  I would go nuts when the toper on high speed would light up with the patrol chatter.

What are your opinions about today’s generation of Pinball?  How do you compare them to older, classic machines?

I really like the gameplay and feel, and the high challenge and variety they bring. I find myself gravitating more to those on my collection than the classics. Yet, todays build quality is horrendous compared to classic pinball tables.

Iconic!  He is an institution in the hobby, and we owe a great deal of gratitude to him for all his efforts of promoting and preserving the hobby.

I currently enjoy playing Stern Deadpool Premium.  It is not the most challenging machine, but it seems to be the most fun.

What would your design and theme of the perfect pinball machine be and why?

I would love to do either an 80’s band pinball with music and toys from Motley Crue, Deff leopard, etc., or something similar with an 80’s new wave theme like Frankie goes to Hollywood, ABC, the cure, OMD, etc.

Are you fan of the new digital pinball machines and what makes them better or worse than the standard machines?

If by digital, you are referring to the virtual pinballs with a large tv as a playfield… I totally hate them… I almost bought one, but after playing and noticing the fake physics and lag, I just could not stand it.

If you could only own one pinball machine, what would it be and why?

I guess I would either keep my guns and roses, or else, Jurassic Park by stern, they have enough challenge and modes to last a lifetime J  and are fun as well.

Are pinball machines aimed mainly at children, adolescents or adults?

I think that’s there are machines aimed at different audiences.   Like hot wheels and TMNT are aimed at younger crowds, while titles like GNR or Led Zeppelin are for the older crowd.

I prefer to compete head-to-head… its more challenging and rewarding.

Which company makes/made the best pinball machines and why?

I believe Williams made the best machines, they had really good design, themes, quality and have endured the test of time.

Do you learn anything from playing pinball?

Not sure if I learn anything per se, but I do practice my focus and coordination.

Sometimes… depends on the title… some can be stressful and demanding… but others are very slow and forgiving, which are nice to relieve stress.

Where do you see the pinball world in the next 20 years?

I see pinballs integrating augmented reality, either by the use of headsets, or holograms, seeing characters and effects all over the playfield