This interveiw was done on November 25th, 2016. Chris has an extensive background in the gaming industry. I hope enjoy this great interview with him and his memories of his career.

Our next Trading Card Spotlight features Chris Cavanaugh who is displayed on card number 512, from the Superstars of 2013 Collection.  Chris is also featured on card number 588.  Chris is the Co-founder of Classic Gamer Magazine which was founded in 1999.  Chris was also the editor-in-chief of Video Game Collector Magazine and currently is the editor of TiVo Games (formerly Rovi Games, formerly All Game Guide).  Other contributions to the gaming community include writing articles for GameSpy and Tips & Tricks magazine.

I believe it was CGExpo 2000 or 2001 in Vegas. I had him sign my issue of “Blip” he was featured in. He was happy to do it and I recall being bowled over by how friendly and approachable he was. Funny thing about Walter, I think you could ask him this question and he would probably remember the exact moment, time, place, etc... Not because I’m so memorable, but because he has an amazing memory, which makes him all the more fascinating.

Zen. Walter has an aura of complete tranquility. He has such a calming presence even amidst chaotic things happening around him.

Playing the original VCS stuff, this never came up until games like Pitfall II’s theme brought that gameplay to life. Even the opening theme on E.T. was spectacular, as was classical music in Gyruss. It made things so much more lively. Ocarina of Time opened things up in my mind. Integrated the music into the storyline, plus it was so amazingly beautiful.

I think I’d be cliche’ in saying “Pong,” but I think that would probably wishful misremembering. My most vivid memory would be of some game hanging on the wall of the local pizza joint. I have no idea what it was called, but I remember people using a remote control as a gun to shoot skeet on the screen. Possibly “Trapshoot”? I also vividly recall Gun Fight and Night Driver and being the first games I popped quarters into. Over and over and over...

I’m a big fan of the industry in general. I don’t love EVERY game, of course, but you don’t have to since there are so many different genres. Something for everyone now. I think most of them are the normal evolution of fun games. I love Red Dead Redemption and I compare it to the aforementioned Gun Fight or Atari VCS Outlaw. We used our imaginations in those original games to envision ourselves living in that old west world, so I’ve always considered Red Dead to be a sequel of sorts.

Well, nowadays these elements are so tightly intertwined that it’s impossible to have one without the other or experience won’t be complete.

I enjoy them both, but for the first time I just finally chose to go with a souped up PC for this generation. Not a knock against PS4 or XB1, but I just thought I’d try something different this time. Plus, I’ve got to get to all my Steam purchases at some point. Although I do play the Wii U with my kids quite a bit. I think it’s an underrated machine.

I still play all the “oldies” on my ColecoVision and VCS, etc. but when I have time to jump into bigger titles I still enjoy playing games in the Zelda series or quicker mission-based games like Star Wars Battlefront. I actually don’t have a ton of time to play much nowadays (real life always cutting in) but when I do it tends to be a level here and a level there. Sometimes I really just enjoy a good mindless shooter I don’t have to think about like Sniper Elite V2. 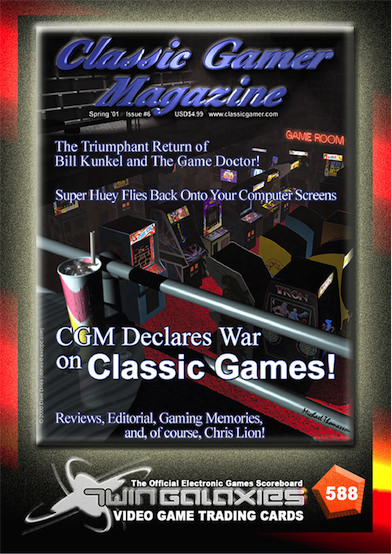 I guess saying a “MAME” cabinet would be cheating, right? Hmm...I guess I’d have to go with Donkey Kong since the different levels are so varied and there are random elements to it for maximum replayability.

Both. I never got into “choosing a side” with consoles, handhelds, etc. I see no reason not to enjoy all of them. Fanboy thinking just closes one’s mind to playing some great games. I’ve owned the Genesis, the NES, the Dreamcast, the GameCube, etc.… It’s all good to me. A good game is a good game no matter what system it’s on.

All of the above, of course. Something for everyone, which is why it’s all so great.

I still prefer playing mostly solo in games, but I also do like the social aspects of playing with others in my living room with some games. I tend to avoid online gaming. It’s too oversaturated with awful people for my liking. It’s the opposite of relaxing.

For me it sure does. Sometimes it’s nice to just veg out and run around an open world running small missions or just sniping bad guys from great distances.

Well, I’d like it if they made a *good* one. Let me know when that happens.

I tend to enjoy the journey up to the boss to be the best part.  If anything, the boss battles tend to stress me out more, heh. Boss battles tend to just be about locking into whatever pattern it takes to defeat him/her/it. Starting the new mission/level is always the most exciting.

Favorite all-time single player game is still Ocarina of Time, but my favorite multiplayer is really crazy round of Warlords on the VCS. That game is always a crowd pleaser and gets everyone amped up.

I once read a comic book artist give advice about getting to work for Marvel or DC. He basically said to study anatomy and the capes and the super powers will follow. Same thing with being a video game journalist. If you can’t grasp the anatomy of a sentence and understand basic grammar and spelling, then you are going to have trouble describing the concepts of a game.   It’s ok. In fact, be annoyed when someone writes “loose a game” vs. “lose a game.” It’s not being nitpicky. It’s being correct.

Yes, I am the senior editor at TiVo Games (formerly Rovi Games, formerly All Game Guide).  I’ve been doing it for 15 years now.

I’m rooting for VR to take hold. Good VR that is. I think immersive experiences will take everything to the next level. But the publishers and developers must care about it instead of just trying to capitalize on it by putting out garbage shovelware apps.