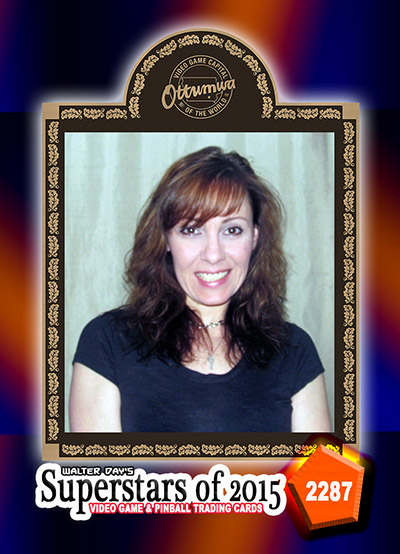 This week we look back at an interview I did August 4th, 2016 with Michelle Ireland.  Michelle is co-founder of the Mayh3m Militia which is a group of gamers who actively stream games to raise money for various worthy causes.

Our next Trading Card Spotlight features Michelle Ireland, who is displayed on card number 446, from the Superstars of 2013.  Michelle is also on Cards 1261, 1646 and 2287.  The second half of the Team Mayh3m duo, Michelle is a true gamer in every sense of the word.  Michelle co-founded the Mayh3m Militia which is a group of gamers who actively stream games to raise money for various worthy causes.  Michelle is also was a contributor to the Walter Day website as a writer.  Michelle took over the reins as the ICON Event Coordinator in 2015 in Fairfield, Iowa.  Her dedication made that event fun for all ages and memorable for gamers who attended.

I have been interviewed by Twin Galaxies International, and ExtendedPlayArcade.com. I make a brief appearance in the documentary Nintendo Quest, and was featured alongside a few of my friends in the Nintendo Quest:Power Tour Episode 6. My work with WalterDay.com and our annual ICON event in Iowa has also afforded me the pleasure of speaking to the local papers there as well.

ICON. Because that is who and what he is.

My first encounter with Walter happened in Ottumwa, IA at the Twin Galaxies Film Festival in November of 2011.

Not sure if it was my first video game played, but my earliest memory of actual gameplay is playing Space Invaders on the Atari 2600.

Though I feel privileged to have been a part of the Video Game Revolution, I consider myself a current gen gamer. I absolutely love retro games, and play them often...but my tastes have grown with the industry.

The original Electronic Football Game by Mattel; it was (and still is) just fun to play.

I am a devoted fan of the Metal Gear, God Of War, Grand Theft Auto and Resident Evil Series. Little Big Planet 1 & 2 are still played often, but Journey is my most replayed game. I also love most rhythm based games. Rockband & Just Dance titles being my favorite, and where the majority of my World Records are held.

Tempest. Because I love to hate this game.

Neither. I was too busy playing and never realized there was a competition. In that battling era, I admit I played Sega not Nintendo.

Nowadays, everyone. Because of smartphone technology, they are all gamers.

I will rephrase that by saying I believe some games have unnecessary violence. I absolutely do not for one single second believe that that violence (unnecessary or not) has any impact on violence in America. The "violence in America" problem is not a byproduct of playing violent games, it is a product of poor human behavior. It is super easy to place blame on something that really cannot defend itself when looking for answers to horrific acts of violence.

With my teammate for sure. Family and friends are fun too. I don't play much online.

Konami. Metal Gear. Yes, it is that simple for me.

More from my team play. It forces me to focus on "our" game play as a whole, not my play alone. There is much, much more to team play than meets the eye.

No doubt about it.

Other than the Classics...I cannot say I watch many of them.

Snake from Metal Gear. I just identify with him for some reason.

Most likely whatever game I played last, but it really depends on the context of which it is said.

Of these five elements video games, which is the most important to you and why? Gameplay, Atmosphere, Music, Story, Art style.

All of them. But since I can only choosing one...I go with gameplay.

No. I have played a handful of games that have left me disappointed in the final battle. But that won't stop me from loving a game if I had fun along the way.
As with everything in life....it's all about the journey.

It's hard to pick just one. So I will pick one from each Series.

It would be similar to Journey. A game that mirrors life. And I would want the main character to be self-created, but still retain some mysterious characteristics that you learn about along the way.

Oh yes. Competitively, my focus has been more towards building my Team Mayh3m achievements. Matt and I also Co-Captain 'The Mayh3m Militia', a group of dedicated gamers supporting charities such as Extra Life, Operation Supply Drop, as well as other fundraisers for  'The Bounty' & 'Love For Josh'. And being the Event Coordinator of Walter Day's Annual ICON event keeps me pretty busy as well. Matt and I travel to as many gaming related event as possible.

Unfortunately digital. I am sad to see it become so digitally oriented. I still buy a physical copy of my favorite titles on "Release Day".