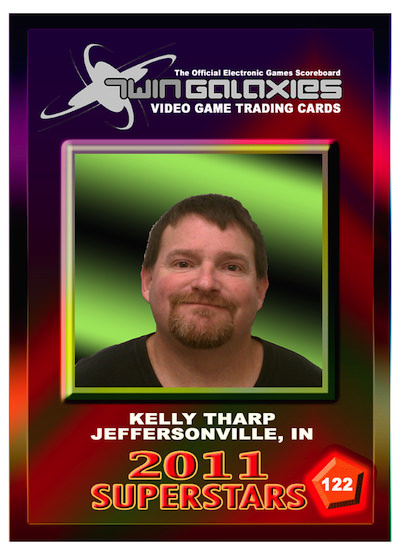 Our next Trading Card Spotlight features Kelly Tharp, who currently is displayed on card number 122, from the Superstars of 2011 Collection. Kelly is also featured on card 2076. Kelly Is a natural arcade champion and world record holder.  His claim to fame is how long he can play a game on single quarter.  Some arcade games he could play up to 60 hours straight. Games such as Robotron 2084, Defender, and Q-Bert.  In December of 2005, Kelly played the arcade game Tapper for over 19 hours and a score of 9,437,400. At that time is was the world record.  Everywhere gamers went they would know the initials L.J.M.  These would be the high score letter of Kelly Tharp.

What springs to mind when you hear the term ‘video game marathon’?

My desire to play a world record game of Defender. I have relapsing remitting multiple sclerosis, and I believe that's why I cannot marathon defender these days. I get horrible muscle spasms in my right forearm from constantly pressing trust him fire. I'm hoping I can overcome that.

When did you first attempt a marathon run and what game was it?

My 1st marathon was on mouse trap in 1982. The local arcade was putt-putt. There was an employee there named Rhonda rough. She had a high score on mouse trap of 1 million 10000 points. The owner took the picture of the dog out of the dog button and put her Picture in it. This was the very 1st game I played at putt-putt, and I was hooked. I told the owner I was going to beat that score. He said you'll never do it but if you do, I'll take her picture out of the dog button and put yours in there. 2 weeks later I play the 20th hour marathon it is arcade I'm a 53 million points, but he did not put my picture in the dog button.

My opinion on today's games is I do not have an opinion I do not play any of them no PC games no TV game systems I'm strictly a 1970s and eighties and Nineties (Klax) Coin operated game player.

No, of course I had no idea I would be on a video game trading card. I was stunned when Walter said he wanted to put me on one.

Space Invaders. I was 12 years old and I saw it at a Pizza Hut. A bum the quarter off my dad, and I was hooked for life.

I do not think video games or to violent, nor do I think they provoke people to violence. I believe the propensity for violence is a brain chemistry thing. I'm speaking only for myself here, but I think playing video games Probably kept me from acting out violently. Whenever I will get stressed, I will pull up a stool and dig out a quarter.

I 1st met Walter in December 2005 when I play my world record marathon game of tapper and humble Texas at a place called totally amused.

I would say visionary, because of the way he saw the importance and cultural significance of video games and the players.

What was your opinion of arcade games back in the 1980s?

Well let's just put it this way I was 16 years old and I liked them better than girls.

I play by myself no one else wants to play with me because they get tired of waiting for their turn.

Q*Bert. A cursing cartoon characters. Way before his time.

Today I mostly play What I call the big 3, Robotron, Defender and Joust. Sometimes I play laser disk games when people who have never seen them finished asked me to do it.

If I could own one game, it would be Defender. I sold mine some time ago and I really regret it.

What does it take to marathon an arcade game?  Is it easier today then back then?

I think to marathon a video game takes some mind Set of concentration, and a genuine desire to be the best at them. And it was easier back then.

Williams Electronics, why? Easy.  Defender, Robotron 2084, Joust, and the hardest game ever made, Sinistar.  Eugene Jarvis is a genius.

I'm speaking for me video games do not relieve stress for me if anything I get stressed playing them. Constantly striving to do better and every time I play Sinastar I get stressed to the Max.

Are you still doing marathons today, and what are some of your goals?

Yes, I occasionally play marathon games my last one was in October of 2018 at galloping ghost arcade I played a 34-hour game of mousetrap. When I was 15 years old, I played defender for 26 hours NA won game marathon. One of my goals is to earn back the tapper marathon world record, and I'm seriously considering trying defender. Maybe it is a function of getting older but my defender game best that I've done in the last year is 328000 and I start getting pain in my forearms from constantly pressing thrust them fire.

I think of a whole new generation of virtual reality games will you can touch, smell, and feel.