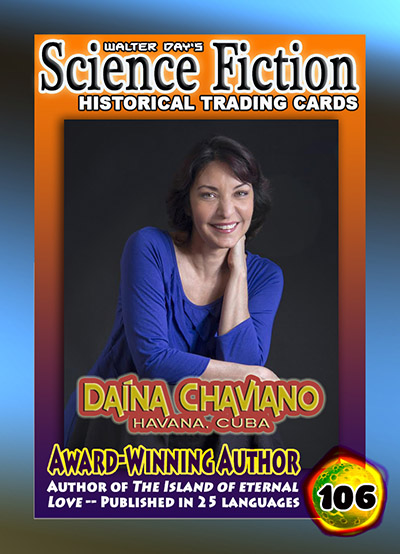 Our next Science Fiction Trading Card Spotlight features Daina Chaviano, who is displayed on card number 106, from the Science Fiction Collection. Born and raised in Cuba, Daina has been writing most of her life.  She has been credited with such awards as the Anna Seghers Award (Germany), Azorin Prize for Best novel (Spain), Gold Medal for Best Book (Florida).   She has been called one of the three most important female writers in the Spanish Language. Daina now lives in Miami and still writes almost every day.  You can see more about Daina on her bilingual website at dainachaviano.com.

In the past, writing was a secret process. Being a writer used to mean living a secluded life. Now everything must be shared. Everyone wants to know everything about you. Even though I understand the importance of the media for any artist, and so I have the proverbial and almost mandatory professional network (Twitter, Facebook, website, blog), I fiercely protect my private life, sharing only those personal experiences that can be interesting for my readers and followers from a literary point of view.


How early in your life did you know you would be a writer?

I am not sure. I only remember that I began writing my first stories when I was about 9 or 10 years old. Since then I knew writing will be an obsession I’d carry with me for a long, long time.

Nowadays I have many—Ursula K. Le Guin, Margaret Atwood, Haruki Murakami, Octavia Butler, Mario Vargas Llosa, Anaïs Nin, Milan Kundera, Ray Bradbury… When I was a child, I loved Jules Verne, H. G. Wells, Mark Twain, Alexandre Dumas, and Charles Perrault. I also began reading ancient epics and classics like The Odyssey and The Iliad, by Homer, anonymous mythological works like the Epic of Gilgamesh (Sumerian poem) and the Popol Vuh (Mesoamerican Precolombian narrative), and historical novels. All of them are still among the authors and works that I cherish.

It never occurred to me. I was born and raised in Cuba, and for us trading cards was some sort of ideologically damaging entertainment that had been wiped out by the government, as many other "evils of Capitalism".

Have you ever received any media coverage for your appearance on the trading Card?  If so, where?

Only in the social networks. My professional environment takes place within the Hispanic community, mainly in Spain and Latin America (I write in Spanish because English is my second language). Unfortunately, the Spanish language media is hardly interested in covering the Science Fiction world, let alone SF related subjects.

At San Juan, Puerto Rico, during the ceremony to receive a copy of his trading cards album, where I was included together with other Guests of Honor at the NorthAmeriCon 2017.

Generous. I have met very few people willing to create something to pay homage to others without willing to gain anything material from it.

If you did not become a writer, what would you be doing?

I’d be an astronaut or an archaeologist.

I read everything: novel, poetry, essays, short stories, history, science… I really like everything as long as it is fresh, different, and unconventional.

It has become my main identity. I am a writer first, and a woman second.

I suppose the requirements haven’t changed. You must respect your craft, read constantly, and keep on writing against all odds. Being a professional writer is not a hobby. It´s a way of living.

I still prefer the hard copy, although lately, as my home library space has reached its limit, I must confess I am proud of having an iPad with hundreds of books that I can carry in my handbag wherever I travel, without having to worry for any extra weight.

I can’t possibly answer this question without leaving out many of my favorites. But I could mention some, without any order, mixing past and present works: The Martian Chronicles, by Ray Bradbury; Life Before Man, by Margaret Atwood; Binti, by Nnedi Okorafor; anything by Shakespeare; The Celtic Twilight, by W. B. Yeats; all by Haruki Murakami; The Left Hand of Darkness, by Ursula K. Le Guin; Stories of Your Life and Others, by Ted Chiang; Cronopios and Famas, by Julio Cortázar; Bomarzo, by Manuel Mujica Lainez; Memoirs of Hadrian, by Marguerite Yourcenar; The Egyptian, and The Roman, both by Mika Waltari; The Carpet Makers, by Andreas Eschbach… and I could keep on indefinitely.

I don’t have one favorite celebrity. I admire many people, from dreamers and philanthropists like Elon Musk and Bill Gates, to spiritual leaders like the Dalai Lama.

Did you play Video games growing up and what were some of your favorites?

I never played video games. I was born and raised in Cuba, and they were not available there.

I definitely believe that violence is an acquired behavior. There are exceptions—sociopaths and psychopaths—, but for the rest of the population, violence is something that it is learned. You can desensitized people if you make them watch too much violence, especially during their formative years. That’s why so many countries have some sort of censorship over too much violence scenes. When I came to US, it was very difficult for me to watch movies or TV shows. I was not used to see so much violence. I literally used to feel sick. Now, twenty-five years later of living here, I can stand watching almost 80 percent of violence scenes without feeling nausea. That doesn't mean that I've learned to enjoy it. In fact, I still avoid watching gore movies or series, but at least I don’t have those horrible nightmares I used to have during those first years here. Likewise, the few video games I have seen are horrendous in terms of violence. I don't want to imagine how much damage they must be doing to those tender brains, which are being molded by those visions.

If you can design your own video game, what would it be about and who would be the main character?

I’d love to design some kind of adventure where I could explore an unknown planet, something that would require social skills in dealing with an alien civilization, and to scheme situations where I would need to use my intelligence rather than violence or quick reflexes.

Are you still involved with writing today, and what role do you play?

I am a full-time author. I write every day—well, almost every day. 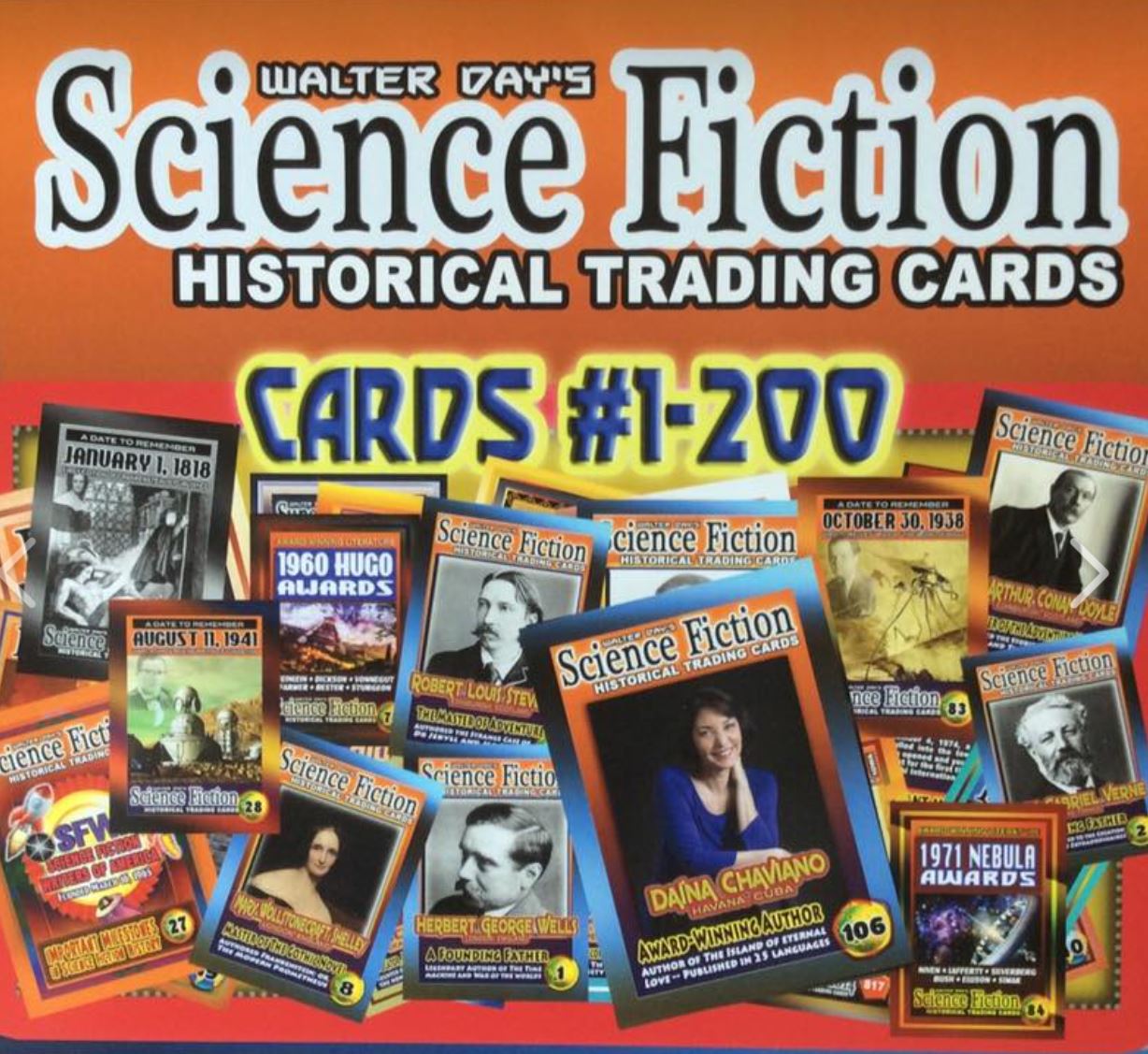