It is with great sadness that Steve Epstein has passed away on Saturday June 13th, 2020.  He was 71 years old. He was a true ambassador and icon in the pinball industry. Steve's accomplishments are no less impressive as the owner/operator of the world famous Broadway Arcade in New York City for more than 35 years. Epstein also worked with Stern Pinball to promote the company’s TOPS tournament pinball system. Steve was the founder and former president of PAPA (Professional & Amateur Pinball Association), and a director of the IFPA (International Flipper Pinball Association).

Here are some words from his peers and friends who have known him the best for many years.

Robert Berk - Founder and organizer of the Pinball Expo in Wheeling,IL

I met Steve for the first time at an early PAPA event that was held in NYC. He was extremely friendly with his trademark smile and always had time to speak about his favorite subject-pinball. He loved to talk about the family business- Broadway Arcade and the sadness he had when the rent went so high that they had to close.

He loved every aspect of pinball.

Zach Sharpe - Zach has been the Director of Marketing at Stern Pinball. He has been an integral part in the continuing promotion of competitive pinball to the player community. Zach is responsible for all of the IFPA/Stern campaigns as well as all of the IFPA related media outreach.

The stories of Steve’s impact on my life are incalculable for so many reasons being part of the “Sharpe” family and that extends far beyond pinball. But fun story I wanted to share while on the topic of pinball is one of the highlights for both Josh and I prior to our older brother Seth’s wedding. Don’t get me wrong, being part of a wedding was a special day and memory for us both, how could it not, but at the time being 13 and 15 years old respectively, the highlight of that entire weekend of events was no doubt getting a special VIP treatment and trip to the Broadway Arcade with just us and “Uncle Steve” as I’ve always loved to refer him by! Steve gave us an endless supply of quarters, a seemingly endless amount of a special order of NY style pizza and we were simply let loose to run wild and play everything in sight. While Josh and I were both born in NY, we never really got to appreciate and enjoy the Broadway Arcade for what it was worth at its pinnacle until that day, and it’s a memory that will forever be ingrained.

I’ll echo my thoughts and prayers to the entire Epstein family at this time and fight and really look forward to seeing how Steve directly impacted others’ lives and reading through those stories. Forever, #PlayStrong

I love this guy, and I barely even know him! Steve, I was introduced to you at Pinburgh last year and felt the same wellspring of joy as when I had been introduced to Roger Sharpe just a couple of years earlier.

I lived within driving distance of the Broadway Arcade but rarely ever went until my dad took me one time. We didn’t stay long – he wasn’t too keen about New York City’s denizens back then – but I remember being overwhelmed by how many pinballs were in that building. It seemed like a lot busier place than a typical arcade. Maybe it was the Grand Central Station of pinball!

I read an article recently about how Steve just knew how many quarters to give you when you asked for change and would quickly dump them in your hand. Then I had an amazing flashback memory of handing either one or two dollars to the change guy and him blindly putting quarters in my hand without counting them while talking to someone else. Steve, that must have been you!

I wish you all of God’s strength right now, Steve, and you should know there are a whole world of people who love what you have done for us!

I do believe that the majority of folks know the friendship and bond I so dearly share with Steve Epstein. He is my kindred spirit, my brother from another Mother and our more than four decades together speaks volumes about us. For those who know us only too well, we are Felix and Oscar, Abbot and Costello—the perfect foils for each other. Or as I like to think, I’m Michael Jordan and Steve is my wingman, my Scottie Pippen. Together we are, were and always will be an unshakeable force where all that we have accomplished couldn’t have happened without being the best of each other and for each other.

The Broadway Arcade—that preeminent cathedral in the heart of the New York City theater district is where the magic happened. It was a melding pot of actors, musicians, and business people from all walks of life and when one passed through that door, there was a sense of being ‘home’. That’s where our paths first crossed, not knowing until later, that we were separated at birth. It was Steve’s willingness to be open to my suggestions and the endless conversations we shared about pinball and life in general.

Steve’s two daughters—Erica and Dale were born just a couple of years apart and around the same time as Josh and Zachary. We would drive from NYC down to New Jersey for an afternoon of the families being together as Ellen and Sondy grew close as well. We were an extended family and life’s seminal moments were shared. Even Steve closing down the arcade on the evening of November 14th 1978 and greeting Ellen and I in his brown tuxedo with champagne glasses filled and lined up because where else should someone celebrate their wedding? Playing pinball was part of our DNA.

The original corner location at 52nd and Broadway was a two floor marvel—pool tables downstairs and the fresh smell of roasted nuts upstairs along with the display cases holding all kinds of wonders. And then, that array of machines—soon to also become the beacon of pinball paradise when the laws changed.

The ritual was simple in the beginning. Getting change from this young fellow wearing an apron holding those dear and essential quarters and, of course, the necessary bills if you were going to truly invest in that escape from the real world. After a time, as a regular visitor, we exchanged names and then the miraculous happened. Steve invited me into the back room where I could stow my shoulder bag and coat or jacket (depending on the season and weather) before venturing out to play pinball.

I was living in the city and in the morning on my way to work, there was the stop at the arcade to bid Steve a “hello” before heading to the office. Lunch time? The trek from 6th Avenue and 55th and then 52nd and Madison, for some pinball and, of course, after work—where else could I go before heading home? More pinball.

This soon expanded as I would travel back uptown when Steve was closing the arcade for our marathon pinball playing as he was making collections from the machines and there was a ‘wall’ to play. Maybe two walls of games to play. Each of us believing and wanting to know—“who is the better player?” Suffice it to say, we each had our days (and nights). And from that the seeds were planted for what ultimately became PAPA which morphed into the IFPA and our mutual contribution to the world of competitive pinball.

I could go on and on with endless stories of Steve helping with Sharpshooter. Both of us bringing Barracora to life and so much more. Our paths, unfortunately, don’t cross as much as they used to. There have been the infrequent golf outings in Florida and the random times of playing in Chicago. Those trips from long ago traveling to Chicago for the industry trade shows and sharing a hotel room with descriptions of that better left for another time. We are yin and yang. Connected at the hip and the flipper fingers and can’t wait to play together again and again and again….love you my man!

I can remember sitting with my dad and Steve at dinner back at Pinball Expo 2005. We talked about the potential re-launch of the IFPA (which ended up happening a few months after that dinner conversation). We talked about the idea of being able to grow this player base of 500 players to over 1000 players as one of our biggest goals, with the WPPR system being the catalyst to motivate that growth. As I sit here 14 years later, looking at the number of 78,870 ranked players in our system, it’s clear to me that the legacy of what my dad and Steve set out to do all those years ago will continue to live on for generations to come.

My thoughts and prayers to Steve, Sondy, Dale, Erica and the rest of the Epstein family as they begin this fight. The Sharpe family wouldn’t be what it is today without all of you.

I’ve always looked up to Steve as a local pinball hero. He has always been such a kind man and positive influence in NYC pinball, from before my time with Broadway Arcade, opening Modern Pinball, playing together at the Vault, to recently with advocating for charity kids events. I remember being welcomed to his home on a weekend where we all played a tournament in NJ. We stayed in the basement where we got to play Barracora alongside amazing photos of Steve and Roger. Josh was super excited to see those photos. Pinball brings so much joy to all of us in this amazing community and none of that would be possible without Steve and Roger. Thank you for that Steve, we all look up to and care about you immensely. Sending you and family positive energy and love, you are in our prayers. 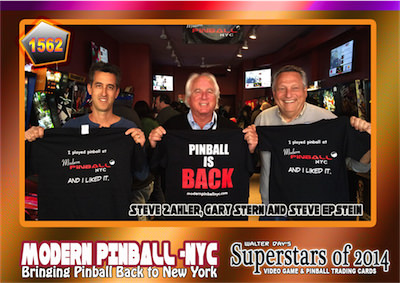