I told Joel and the gang that I would continue to enjoy the afternoon with my wife and I would see them all later. Billy Mitchell then emailed me and said to get my ass down there. How could I resist?

We pulled into the parking lot of the studio where Joel West gave us both bear hugs. We sat down outside with Billy Mitchell and Mark Hoff.

While we were all chatting, Alicia Marie walked up to us and said “Hi!”. She recognized Billy right away, and was quite excited to see him. 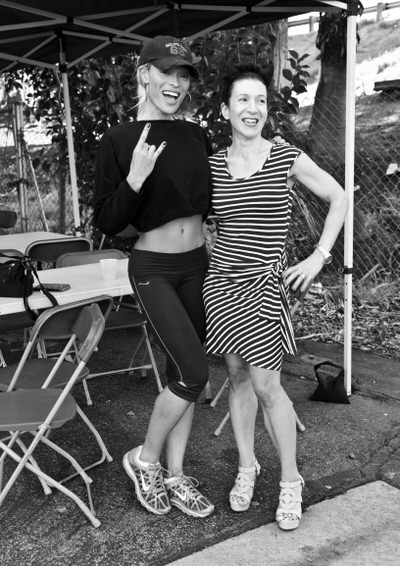 I said hello and introduced her to my wife Stephanie. We had all been chatting on the live streams, but it was very special to actually meet in person. She said “I know you are really William McEvoy, but I won’t reveal your secret identity, Datagod!”.

Jace came out a few minutes later, excited. He explained that they were sorting out a technical issues inside and once resolved would take us on a grand tour. 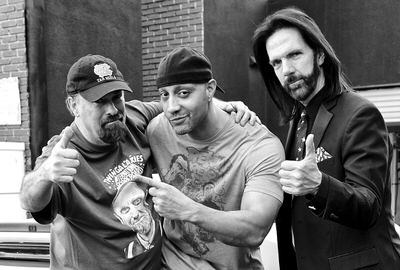 Jace showed us the various studios, lounges, booths, theaters, server rooms, etc. and left us to chill in the lounge while he went and did some more work. Billy played PacMan, and I watched various NFL dudes being interviewed.

Stephanie and Alicia Marie quickly became friends and were deep in conversation. I was just smiling ear to ear the whole time. It was like watching Three’s Company one day, and being on the set the very next day hanging out with the stars. Surreal.

Jace came back and took us upstairs and showed us Smile Time. Way cool. Then he took us to his private office where we got to hang out and shoot the breeze. We were there for a few hours, then Richie and Eric Tessler and one other fellow arrived.

I of course had my camera with me, as you can see by the photos.

Around 11:00pm Stephanie and I decided to head back to the hotel. For the past hour or so Joel and Mark were desperately trying to track down Walter Day. It turns out he was in good hands with Dave Danzera. All was right with the world.

We saw Walter Day at the event, gave him huge but gentle hugs. I marveled at the mountain of trading cards he had with him. Joel West got busy setting up a sales table, and began hawking t-shirts and hot sauce. 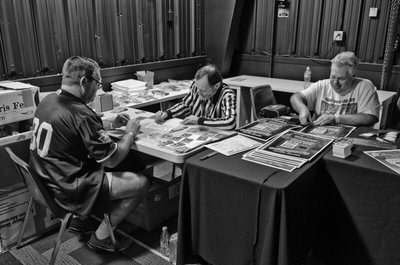 I brought several stacks of photos with me, and proceeded to give them away. Some were for sale, some were used as peace offerings.

All proceeds from the sales went towards the trading card project. Buy a photo, drink some hot sauce, wear a t shirt, help Walter continue his great work.

After a while, a shipment of trading cards weighing 70 pounds was delivered by Richie Knucklez and Eric Tessler. That is a huge amount of cards!

I then went to play pinball! I helped set a record for the most amount of people playing pinball simultaneously (328?). That was fun. 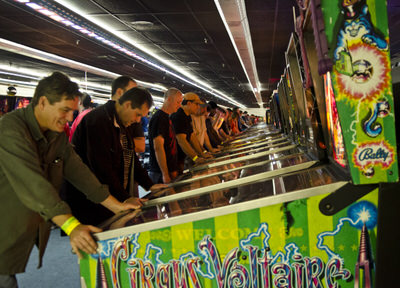 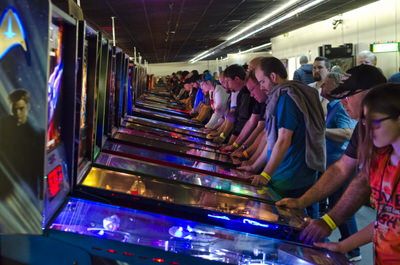 Just walking down the many aisles of machines makes you feel like you are in another world. The artwork, the themes, the sheer fantastical beauty of these devices is almost overwhelming. I ran from machine to machine, sampling them one ball at a time.

There were pins from my youth and pins I never heard of. Two player soccer games, Defender pinball, Jackbot, etc.

Stephanie was more than happy to let me do my thing and explore, while she helped at the selling table. She really enjoyed visiting with the trading card crew. She also chauffeured Billy and his son for the afternoon, as they had a football appointment.

I hung out with Derek Sorrels on Saturday, getting cards authenticated. The representative from Beckett was very helpful This man routinely sits with millionaire sports stars, but today he was all ours.

Awards Ceremony
The awards ceremony got off to an awkward start as I had to climb over a baby stroller and a giant cake in order to lean on a wall and not be in Walter's way. Richie kindly offered me a seat, but I saw an aisle seat open up so I sat there and only jumped up to take photos when necessary.

There were about 30 more awards given out, then we had the candle lighting ceremony for Ralph Baer who was the inventor and founding father of the home console video game industry. Mr. Baer passed away in December.

The award ceremony was an intimate affair. By that I mean 80 people were stuffed into a sardine can and set on fire. It was unbearably hot, and I had just transitioned from shorts and t shirt into a dark suit. Lovely.

Mark Hoff managed to get Jace to come in to the awards ceremony and give an unplanned speech. It was ambush journalism at its finest.

You could clearly see the passion that Jace has for competitive score chasing and Twin Galaxies. Everyone in the room warmed up to him. He is quite a charming fellow.

He also admitted that this was the first time he met Walter in person, which was surprising given the recent sale of Twin Galaxies

After the ceremony I found Jace playing Zookeeper and gave him some funspot tokens that I brought with from Canada. I also beat him at "Leafs and Queens" which is a version of Heads and Tails played with a $5 Canadian silver coin. Billy officiated. I am still undefeated.

Day Three
Pretty much the same things happened on day three, but with different personalities. We had a great time.

Takeaway
What I have learned from this trip is that no matter what your lot is in life, no matter how rich or famous you are, whether you are a business tycoon, an arcade owner, a movie star or somebody who pumps gas, when we are in an arcade we are all on equal footing. We come together for the joy of playing video games and pinball. Our outside lives fall away and we treat each other as peers, comrades, life long friends.
If you are thinking about attending a big event, just do it! You will soon be hooked like me. See you there!