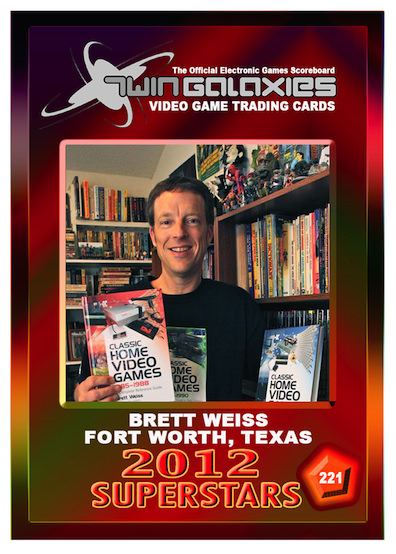 Most of today’s console games require more of a time investment. Unless you’re playing some of the simple download titles, you can’t really sit down and kill a few minutes like you could on the Atari 2600, ColecoVision, or Odyssey2. Having said that, there are some I enjoy, such as Bayonetta and God of War. I really enjoy some of the third-person 3D hack-and-slash titles. The arcade industry is largely comprised of these giant quarter-gobbling games and ticket-dispensing games that pale in comparison to Asteroids, Defender, Ms. Pac-Man, and the like.

Ha! It never would have occurred to me. I had a few baseball cards growing up, and I collected KISS cards, so it’s pretty cool to be on a card now. It is quiet the honor.

Have you ever received any media coverage for your appearance on the Trading Card?

Not that I know of, but I have received media coverage for my books about video games, such as in different newspapers and on various websites.

I met Walter at the 2003 Classic Gaming Expo in Las Vegas. I asked him about a Mr. Do! Tournament that was coming up—he was patient with my questioning.

Kind - He has a smile, a warm handshake, and a kind word for everyone he meets.

Game Boy Advance SP. Lots of cool titles, and it was awesome to finally have a Game Boy system that was backlit.

Console. I very rarely play PC games, because console gaming is easier to hook up, access, and play. However, I do play the old cartridge-based computer games for the Commodore 64 and Atari 800.

I largely prefer the pick-up-and-play titles of old, such as Asteroids Deluxe, Millipede, Robotron, Dig Dug, Galaga ’90, Beauty & the Beast (Intellivision), and Lady Bug. I love maze games, action games, 2D shooters, and climbing games. I also like 2D platformers, and, as I mentioned before, I like third-person 3D hack-and-slash titles when it comes to the modern stuff. My favorite game of all time is Mr. Do! My favorite modern game is Maximo: Ghosts to Glory for the PS2.

Monster Bash, the pinball machine based on the Universal Monsters. I love classic horror movies, and that machine looks, sounds, and plays great. Challenging, but not frustrating. I could also go for the Tron arcade game—it looks so cool and has four great screens.

Growing up were you team Sega or Nintendo?

Growing up I was an Atari guy and a Coleco guy, because I’m old. Before I got my own console for Christmas when I was 15—a ColecoVision in 1982—I would go to everyone’s house I knew and would play their Fairchild Channel F, Atari 2600, Odyssey2, and Intellivision. When I got my NES in 1986, the year after it came out, I was almost 20, but I loved it as well and starting assembling a collection, including such titles as Super Mario Bros., Ikari Warriors, Double Dragon, and Contra. I didn’t get a Sega Master System until later, but I got a Sega Genesis in 1990, the year after it came out, and a Super Nintendo in 1991, the year it came out, and I loved both consoles.

Time, patience, and a love of gaming. Plus, you have to be able to write in a concise, entertaining fashion if you want to get published in respectable markets.

I’m not a big fan of gore or overly violent games (unless it’s fantasy, like ripping apart and blowing away monsters in a 3D action title), but I don’t think violent video games lead to violent behavior. Extremely violent first-person shooters like Call of Duty make billions of dollars and are played by millions of people, but there have been far more violent times in the world than today. Most violence is the result of desperation, indoctrination, drug use, and the like, not pushing buttons while staring at a TV screen or computer monitor.

Video games can be a great learning tool (they are ideally suited to teaching geography, history, and math—schools should make more use of them), but the simple action games I play aren’t particularly educational.

Whether you’re wandering around in a lost kingdom looking for a sword, flying through space while blasting aliens, or concentrating on a simple maze game, video games are the perfect escape from the worries of real life.

Yes, I write books about classic video games, and I write holiday gift guides, fall and spring previews, and the like for a major metropolitan newspaper, the Fort Worth Star-Telegram. I also attend conventions, co-host panels, and play games in my game room.

Mostly downloads and, from what I understand, more and more virtual reality. People will don wearable technology and go out in the real world on treasure hunts (real and virtual), monster kills, and the like.