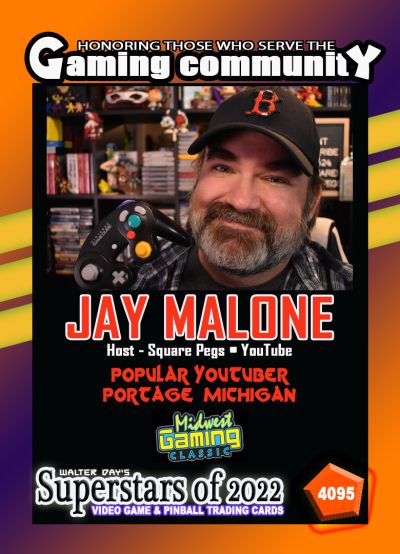 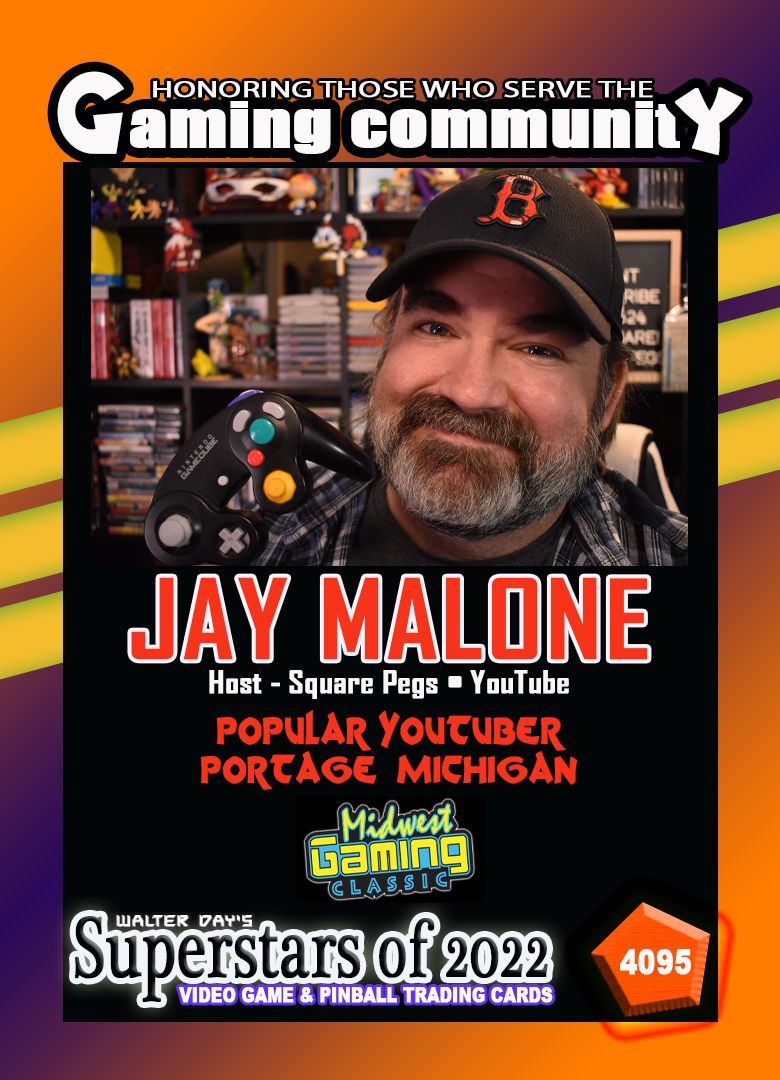 Our next Trading Card Spotlight features Jay Malone, who is displayed on card number 4095, from the Superstars of 2022.  Jay started his video game journey in the 80's, when his cousin sat him down in front of an old TV and played him in Atari Super Football. Hours upon hours of playing Mega Man 2 and Earthbound eventually led him to work in the game industry for the better part of a decade. In 2019, Jay launched the YouTube channel Square Pegs, dedicated to the best in retro and modern gaming. With a love of the Sega Genesis, Nintendo GameCube, and Nintendo 3DS as his favorite consoles, Jay dives into a wide variety of subjects - from platformers to sports, his sincere desire is that we all Play More Games and Stay Square!

What is your favorite YouTube episode you have done so far, and what makes it special?

I did a video a couple months back extolling the virtues of licensed games, and how the gamer mantra of all licensed games being terrible wasn’t even remotely true. It was really fun to dip into things like superheroes, Star Wars, and anime to pick out fantastic, licensed games that are both fun to play, and in many cases critically acclaimed. It made me realize how many deeply held tropes that we hold onto as gamers, and that pulling those apart and finding, at the very least, exceptions to those hard and fast rules would be fun.

When did you begin your YouTube channel and what inspired you to do so?

I started my channel in September of 2019, and pretty much promptly forgot that it existed. For the first six or seven months of the channel, I think I released 12 videos? It wasn’t until May of 2020 when I realized that with a pandemic on, there was no reason to not focus on making videos. I’ve been doing two a week ever since. A bit before the channel started, I saw an article on Kotaku with an interview with Metal Jesus about Big Box PC collecting. I thought he was really engaging, and I enjoyed his thoughts on game collecting, so I subscribed to his channel and the more I watched, the more I got familiar with people like John Riggs, John Hancock, and a lot of other folks. Subscribing to their channels made me think I could do my own spin on it, and the rest is history.

I don’t remember the specific name, but I remember the experience. The first game I ever played was a football game on the Atari 2600 with my older cousin, Greg. This was 1983 or 1984, so I was four or five at the time and had never seen a video game before this. Greg is six years older than me and was my hero (and still is, honestly) and he was always patient enough with his precocious younger cousin to spend time with him. Him playing that game with me that day and actually teaching me how to play rather than just working me over for a quick win (which he also did) completely changed my life.

I love modern gaming for what it is, and I think comparing the classic games I grew up on to what’s developed today is trying to compare an apple to a jet ski. Both are satisfying in their own way, but they’re completely different beasts. I’ve played and loved games since the first time I picked up a joystick, and I don’t see that ever really changing. But after working in the industry for a while, I look at how much work goes into a modern game release and know that there’s really so many moving parts involved in development of a massive piece of software like a Madden Football or Star Wars: Jedi Fallen Order that it’s kind of miraculous that they ever get to a working state.

My dream growing up was to be a professional hockey player, so I always wanted to be on a trading card. But I never REALLY thought it would happen. And no lie, 40-something Jay can’t really believe that he’s on one.

I love the Nintendo DS Lite. The ability to have such a massive library of games from the DS, GBA, GBC, and GB at your disposal with such a beautiful backlit screen is so underrated in the world of gaming.

This answer has really changed as I’ve become a family man - now that I have a wife and teenage son, it’s definitely console gaming for me. Anything where we’re able to spend quality time together playing games as a family are some of my favorite and most valuable memories.

My favorite genre are RPGs, though I play an awful lot of sports games and platformers. I’m currently playing a lot of Super Mario 3D Land, Uncharted: Legacy of Thieves, Pac-Man Museum+, and Final Fantasy 6.

Which console company is your favorite and why?  Nintendo, Sony, Sega, or Microsoft or other?

From a hardware development perspective, it’s Sega. Every Sega console I’ve ever played are things that I’m just head over heels in love with, whether it’s the appearance of the console or the power. I really miss having Sega as a hardware provider in the industry today. For software development, it’s Nintendo. They have such a huge quality dedication that to me it’s nearly impossible to get past how great they are at making games.

That’s a great question! I don’t really know that I’m able to speak towards this with any kind of authority, but for me personally, there’s something really special about the evolution of things like the Final Fantasy victory anthem when you win a battle. EVERYONE knows it, even though there have been subtle shifts in the way it’s played or presented over the decades. I can also look at something like DuckTales: Remastered from last generation and point to these incredible versions of the classic music from the NES game that WayForward was able to release for the new game. And then there’s artists like one of my favorite rappers, Mega Ran, who regularly samples video game soundtracks in his music and is a major evangelist for video game music being real music. There’s so much incredible work being done in game music from massive orchestral arrangements, down to one guy making amazing MIDI loops for his NES homebrew.

What is your favorite NES game of all time and why?

This changes so frequently, but I think if I had to pick one today it’s probably Mega Man 2. Everything about the game just clicked for me - the action, character design, sprite work, music, challenge, enemies - it was a perfect game for me at the perfect time when it released. It’s something I go back to every year and play to completion, because I love it so much.

Nah. We’ve had incredible violence in human society for millennia, and we’ve always looked towards anything other than ourselves as the source of the problem. We’re a violent species, and it’s up to us to work within our laws to pass common sense mental health and weapon legislation that can protect citizens and actually help reduce violence, rather than point at video games, music, movies, or books as the sources of all our ills in this country.

Very much so. Maybe not for everyone, but they are for me. I regularly boot up things like Tetris, Team Fortress 2, Super Mario Bros. 2, or ToeJam and Earl to lose myself from the real world for a while.

Mega Man! The Blue Bomber has been my favorite since I first played Mega Man 2. I love the different weapons, the level designs, and the music - and honestly, he’s such a cool character with an amazing design that I can’t help but love him.

What springs to mind when you hear the word ‘YouTube’?

Work. It’s fun, don’t get me wrong, but it’s a second job. I constantly need to iterate on ideas, change direction on what I’m working on, and market myself and my channel. I love the work, but it’s definitely work.

Very much so. The satisfaction of finally defeating the big bad evil guy at the end of a level or the end of a game is just top notch.

What is your favorite multiplayer game?

X-Wing Vs. TIE Fighter. I loved being able to have a LAN party and do awesome space combat against my friends.

If someone wanted to start a YouTube channel, what advice would you give them today?

Go in with open eyes. It’s not easy. You’re in constant motion thinking of ideas, workshopping editing techniques, and trying to figure out your niche. Working on videos can rapidly become frustrating and it can lose its luster very quickly - especially if you’ve got no background in video editing, audio editing, lighting, and graphic design - all necessary skills that you’ll need towards making videos. But, if you stick with it and know that in 99.999% of cases it’s going to take considerable effort to even crack 1000 subscribers, then you’re already laps ahead of a lot of people. And don’t sweat buying tons of equipment - most cell phones can operate as your main camera and take high enough quality video that you don’ t need to go out and spend hundreds to thousands of dollars on an SLR that shoots in 4K.

I actually picked up NES Maker at Midwest Gaming Classic in 2021, and I’ve been playing around with it somewhat in hopes of putting together a game idea I’ve had for a couple years. Our dog Tessie passed away last year, and I’d love to do a platforming game starring Tess.

I think we’re going to see an even deeper divide between what people play on a PC and what people play on a home console. VR I don’t think will ever truly be as widely accepted on consoles as it is on PC, so I see PC gaming starting to dovetail more in that direction. From a console perspective, I feel we’re going to see a swing wildly towards digital only, only for that to drastically backfire on developers and hardware manufacturers. I also think we’re going to start to see a re-emergence of arcade-like experiences that have more VR or immersive elements in them, akin to the Escape Room boom from a few years ago.