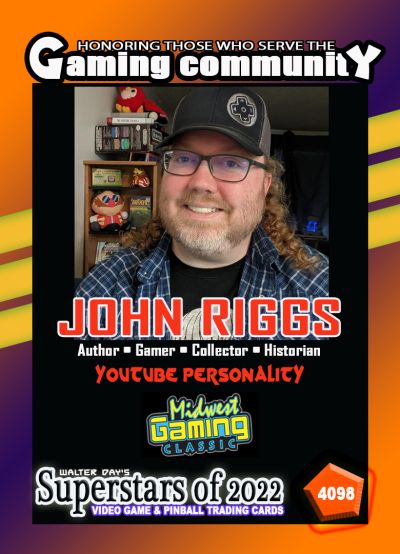 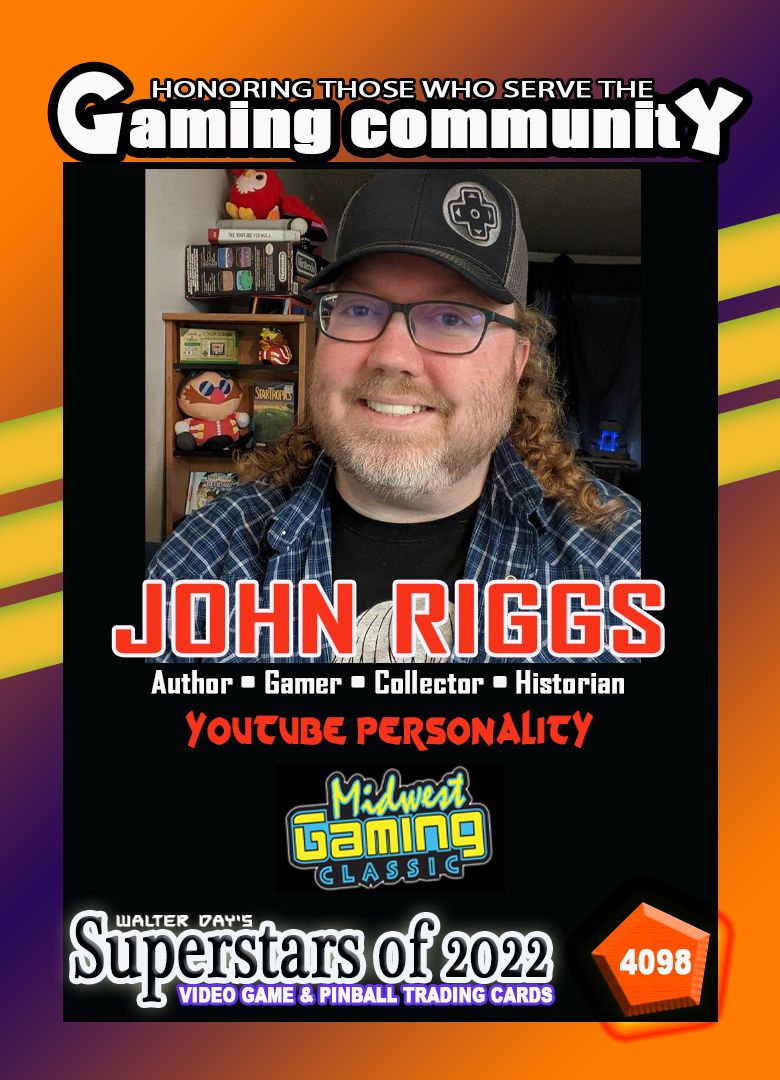 Our next Trading Card Spotlight features John Riggs who currently is displayed on card number 4098, from the Superstars of 2022 Collection.  John Riggs has been playing video games for as long as he can remember. From his earliest gaming memory of playing Donkey Kong in the arcade to the time his dad brought home their Atari 2600, playing video games has always been his passion. He also takes you on his journey hunting for video games at conventions and game stores and, if a game isn't working, he attempts to get them working again with his 'Open Cart Surgery' series on his YouTube channel.

When did you begin your YouTube channel and what inspired you to do so?

In 2014. I never watched YouTube for 'shows' so didn't know the scene or the people. I met Metal Jesus Rocks through local conventions, and he invited me on his channel and after I saw what he did behind the scenes I started my own shortly there-after. He was a huge influence for me to start my channel.

What is your favorite YouTube episode you have done so far, and what makes it special?

I'm not sure I have a personal favorite. One that stands out is a very early Open Cart Surgery video when I first started that series. I couldn't get a game to work but found a broken trace, so I wired the pin directly to the board and it worked. I impressed myself as I don't have a clue what I'm doing in those videos.

The first arcade game I remember playing is Donkey Kong. It was 2nd from the left in the back of our Arcade in our local mall. I remember approaching it saying to myself i was going to play it. I also had the feeling I knew I've played it before but that's my first memory of actually playing it. Shortly after this Donkey Kong Jr. debuted.

I think today's generation of video games is great! The AAA titles always get all the love thanks to marketing dollars but there are so many great indie titles that are cheap and inspired by retro games, it's a beautiful thing. Never have to look far for a great game to play. I play the new games for a fun experience; I play the older games for nostalgia.

Never in my wildest dreams. I wanted to be a pro wrestler growing up and thought how awesome it'd be to have my own card but was also realistic enough to know it'd never happen. This proves it wrong. I'm very excited.

Visionary. In a time when people were either challenging their own high score or the high score of their friends, Walter Day had the insight to take it farther than the local arcade to find the best players anywhere. Glad he did.

The Game Boy Advance SP. It was the first Game Boy in the US with battery charger, backlighting and played game boy and game boy color games. I still play mine regularly.

I prefer console the same way I prefer watching movies at home. I can't pause my game at the arcade, nor can I just play it whenever I want or whenever I feel like it.

Which console company is your favorite and why? Nintendo, Sony, or Sega?

I'll always be a Nintendo fanboy. I love Sega as well, especially growing up with Genesis and all that but I'm always sure to have fun with Nintendo.

If there were no limits and I was making a game for me and not for the general audience, I'd make an autism simulator so you can experience what it's like to have autism. My son has autism and it's an insight into a whole new world. I'd love for others to experience what he goes through when it comes to light and sound sensitivity, anxiety in public places and more.

More than people realize. Music can set the tone for games just like they can movies or clubs in real life. Not enough emphasis is set on music in video games. I've believed that since the days of the NES. Video game music is music, real music.

If someone wanted to start a YouTube channel, what advice would you give them today?

Don't worry too much about getting the best camera and all that. I got to 100,000 subscribers just using my phone as my camera/microphone.

What is your favorite NES game of all time and why?

Zelda 2. Thinking back to when it first came out, I loved the first Legend of Zelda, and this took my favorite parts of Zelda with the exploration and added the 2D side-scrolling elements that I also loved. It drew me in. I had more fun just walking around, visiting towns, exploring caves and traveling than I did spending time actually going through the story mode.

When do you start doing cosplay and what was your first character?

The first character I ever cosplayed as was Vash the Stampede in the late 90s at an anime convention in Seattle. I made my own outfit and everything (I know how to sew a little). It was fun!

Not sure he's my favorite but I like Mike Jones from StarTropics because there's literally nothing special about him. He's just some kid trying to find his uncle.

What springs to mind when you hear the word ‘YouTube’?

It may not be the most flattering, but the first thing I think of is a bunch of people seeking attention, but that's how you get yourself out there.

Not for me. They're inevitable; like the test to use all you've learned up to that point. Sometimes they can be fun like the Zelda series or the Metal Gear Solid games, but I just find it as a sign of the thing in your way to progress to the next part of the game.

What is your favorite multiplayer game?

I'm a big fan of Game Pass on Xbox. Let's me check out some amazing games from AAA titles to indies as needed. I've discovered so many great games through Game Pass. I'm also a huge VR gamer and play my Quest 2 daily. I'm a big fan of puzzle games as well as your traditional platformers.

Honestly, the same as it's been for the past 10 years. I haven't personally seen much innovation as far as new ideas. So many reboots and sequels and that seems to be a winning formula for most companies. The graphics are better, but the gameplay stays the same.