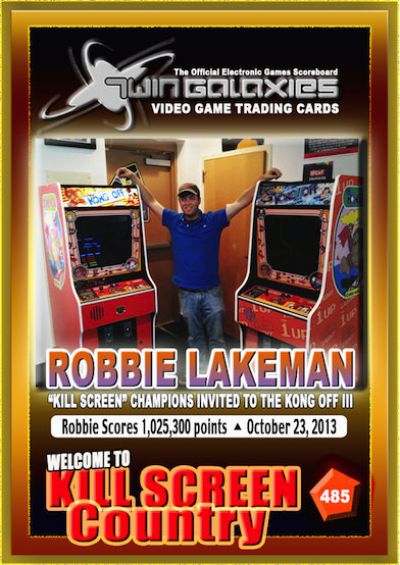 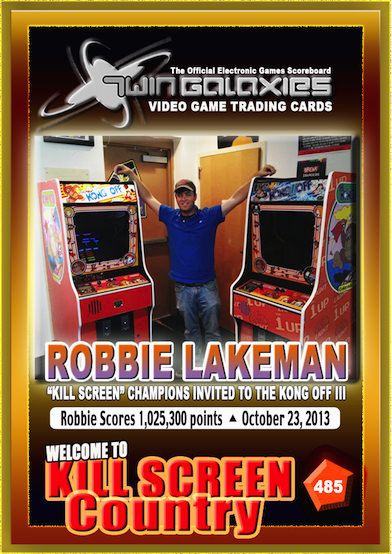 Our next Trading Card Spotlight features Robbie Lakeman, who currently is displayed on card number 485, from the Superstars of 2013 Collection.  Robbie is also featured on cards 504, 1821, and 2238. Robbie is a fierce competitor in the retro arcade genre. His claim to fame is his amazing high scores he gets in the classic arcade game Donkey Kong. He has set the highest score many times on Donkey Kong Forums only to be beaten by the next competitor. As of June 8th, 2021, Robbie beat the newest record on Donkey Kong with the score of 1,272,800 on one credit. Robbie decided to take a break from classic gaming while on top. Who knows, he may just come back and beat more records one day.

My first video game I remember playing was Super Mario World for the SNES.  We got the SNES one year for Christmas, and the game came with it.  I remember the joy of exploring different worlds and finding alternate routes on the map.

I do not personally play any of the newer games, but I do see the appeal.  You can interact with other players, build teams, play winner take all, and many different formats.  The growth of Esports really took off, and I think it’s great to see gamers become rockstars because of it.

I played several sports when I was younger, so being on a hockey card, or baseball card was what I really wanted.  The idea of a video game trading card was something I never knew was possible at the time but would have gladly accepted the honor either way.

I first met Walter Day at Kong Off 2, and we immediately started talking baseball, since we’re both Red Sox fans.

What was your best finish at the annual Kong Off Tournaments held each year? Do you enjoy those?

I had a couple victories at Kong Off 5, and Kong Off 6.  I always enjoyed traveling to a live venue to display my skills for a live audience.  I get more of a rush at those events than I do at home, and felt it always gave me an edge.  The biggest thing for me was always meeting new faces and hanging out with friends I’ve made over the years in the hobby.

Legendary - He started a scorekeeping system to promote the best players back in the 80s, and it is still around today.  He has also been in documentaries and been referenced in pop culture like Wreck It Ralph.

When did you achieve your first ‘kill screen’ in Donkey Kong and where was it at?

My first Kill screen in Donkey Kong was fall of 2012 in Scottsdale, AZ on my computer at home.  My first credit of Donkey Kong was at Funspot in early 2012.  I remember getting past the first screen, and then being confused on how to play the next screen.  I knew nothing about the game at the time.

What is your opinion on console/mini arcade versions of Donkey Kong and is that something you are shooting for a record?

I think they’re great, because playing different versions of the same game can shake things up a bit, but I have no interest in shooting for a record.

I still play the classics at Funspot whenever I can get over.

If you could own one arcade game besides Donkey Kong, what would it be and why?

I would likely get a Centipede, because I just really like the game, and I’m always trying to get better at it.

What does it take to be a world record holder on an arcade game?

Just like anything else, you need to practice as much as you can in your spare time.  Taking the time to learn the game, and the best strategies to take down the top score is the way to go.  Not letting nerves get the best of you when approaching the top score.

I prefer arcade, because I enjoy the experience of going into an arcade, and standing at a machine that’s aesthetically simple, but extremely difficult.  Arcade games have always appealed to me more.

I enjoy playing alone if I’m trying to solve a game or get better at it.  I can focus better that way, but if I’m looking to have more fun with video games, I like competing with friends.

I’ve always been a Nintendo gamer who enjoys all the Mario games, and just like the characters they come up with.  They also aren’t afraid of trying something new, or different.

It depends on your mindset going into a gaming session.  If you’re looking to just kill some time to be entertained and take your mind off of the little things for a little while, then its a great stress reliever.  Competitive gaming can create more stress just by adding the competitive aspect to it.

It’s hard to get away from Mario after being a lifelong Nintendo fan.  He is a legendary video game icon and owning the record for the first game he was ever featured in is a huge honor for me.

What springs to mind when you hear the term ‘Donkey Kong’?

I recently retired from competitive Donkey Kong on top, but don’t really have any gaming goals currently.

It’s hard to say, because things are moving so quickly, but I can see a lot more Augmented Reality and Virtual Reality being a big part of it.