Our next Trading Card Spotlight features Piotr Delgado Kusielczuk, who currently is displayed on card number 3492, from the Superstars of 2020 Collection.  Piotr was recently presented his trading card and award with a virtual trading card ceremony. His accomplishments are worthy of many more awards. Piotr is one of the greatest speedrunners of games, not only in Mexico, but in the world as well.  To me, his most impressive feat is that he was the very first person to complete every Nintendo Entertainment System game made from the 1980’s and 90’s, over 714 games. He is recognized by the Guinness Book of World Records for this accomplishment.

What is your opinion of speed running streamers?

I always think that speed run streamers are the true heroes in gaming and it's an art what each one achieve with the games they love, sadly the majority of players aren't known outside of the speed run community, I think that is very unfair because like any other e-sport player we also spend thousands of hour in our games learning them to the core but get to live in the shadow. I just wish there will be more support for speedrunners in general, but I guess we are like those music composers destined to live in the shadows and make a form of art that will stay for generations.

It was Super Mario Bros / Duck Hunt - I really don't remember that much about it other than once watching my mom trying to play with us and dying on the second pit in world 1-1 it was very fun to see her moving the controller up without Mario jumping.

What are your opinions about today’s generation of video games? How do you compare them to older,classic games?

I think modern Video Games have drastically decreased the difficulty where beating or finishing a game doesn't represent a challenge anymore, the reason why I love older games is because they are simple, funnier and represent a challenge for the player, if you succeed to beat them there is a satisfaction of achieving something great and that is lack for me in modern gaming.

How did you decide to beat every NES game made and what were your expectations?

In May of 2014, right before NESMania started, I was speedrunning Super Castlevania IV very intensely for a whole month and I felt burnt out and wanted to take a break from speedrunning. During that period, many ideas came to my head regarding what to stream, but most of them were not very meaningful to me since they involved casual playthroughs. At that point, I really hated casual playthroughs, because I like to play games with a goal in mind, like racing against a clock. Around that time, I was on a Skype call and had the following conversation with some Chilean speedrunning friends:

-Lepi: Why don't you do the A-Z that Big Jon does? (sarcastically)

-TMR: It looks nice, but I do not like the fact that you only play the games for only a few minutes.

-Lepi: Then beat all the games. (sarcastically)

-TMR: Well that can be something.

-Lepi: But you are crazy, I was just joking.

After that unexpected conversation, I started to think very seriously about what he had said. Since I had previously beaten what were considered to be the 30 hardest NES games (according to electricfrankfurter.blogspot.com), I thought "It shouldn't be that hard, right?"

Without hesitation, I found myself thinking about a name for the project. The name was very easy for me to pick because when I was a kid, I used to love a TV series in Mexico called "Nintendomania". That was the big inspiration behind the name of NESMania.

About my expectations, I didn't have a clue what I was getting into, I thought that the games will be a walk in the part since I previously have beaten what was considered the top 30 Hardest games from the NES according to the Electrik Frakfurter's list. But my surprise was that this was going to be more challenging that I thought but when I found out that no one did it before that was a moment I fully convinced myself to commit 100% and the retro community was always there to help me and support me in this crazy challenge I started.

I mainly play retro games for the reasons explained in the second question, and my favorite genres are platforming and shot 'em up.

I'm not a big fan of arcades or pinball machines, but I remember when I was a kid in a mall nearby there was this Simpsons arcade, I always wanted to play it and since the Simpsons are a classic probably that will be the one I will choose.

I wanted to be a professional soccer player or a Pilot, but since my mom was into music. I started playing music since I was a kid until I grew up.

What does it take to be a successful speed runner?

It takes ambition, skills and determination. Being a successful speed runner has many meanings, everything depends on what we take as a success, getting a world record? getting people recognition? Achieving your goals? For me being a successful speedrunner could mean becoming the number one in your speed game. But everyone has a different approach to what is success.

With the mind of businessman’s, video game companies started to make games targeted for every audience, so we have all sort of games right now. But I will think the ones who bring more profit are the adolescents and adults’ group.

I cannot answer this question since I don't live in America. I think everything start at home, so with a strong parent’s education, people will know the difference between games and real life.

How can you compare the gaming scene in Mexico to other countries around the world?

Sadly, the gaming scene in Mexico isn't very well seen in Mexico itself, so around the world in other countries like USA or European gaming is accepted and it is considered a profession. But in Mexico is very hard since there isn't many developers nor players on the scene.

Rare back in the 90's because they were innovative and made everything they possibly could in a videogame, nice level design, good controls, cool story, amazing graphics, outstanding programming, etc. In the 2000's I think Valve made great games and Blizzard. About modern time, I did like games from Devolver Digital (The Messenger) and Studio MDHR (Cuphead). But I usually do not play modern games so is hard for me to say.

I think they are in a way, but I believe there is some physicals stress that cannot be taken out gaming so it's a better idea to relieve stress doing sport.

Not at all, when I was a kid, I always dreamed about joining the arcade fighting competitions, but that actually never happened.

Yes I did, it was a livestream "Trading Cards Ceremony Awards" on thewalterdaycollection.com website. 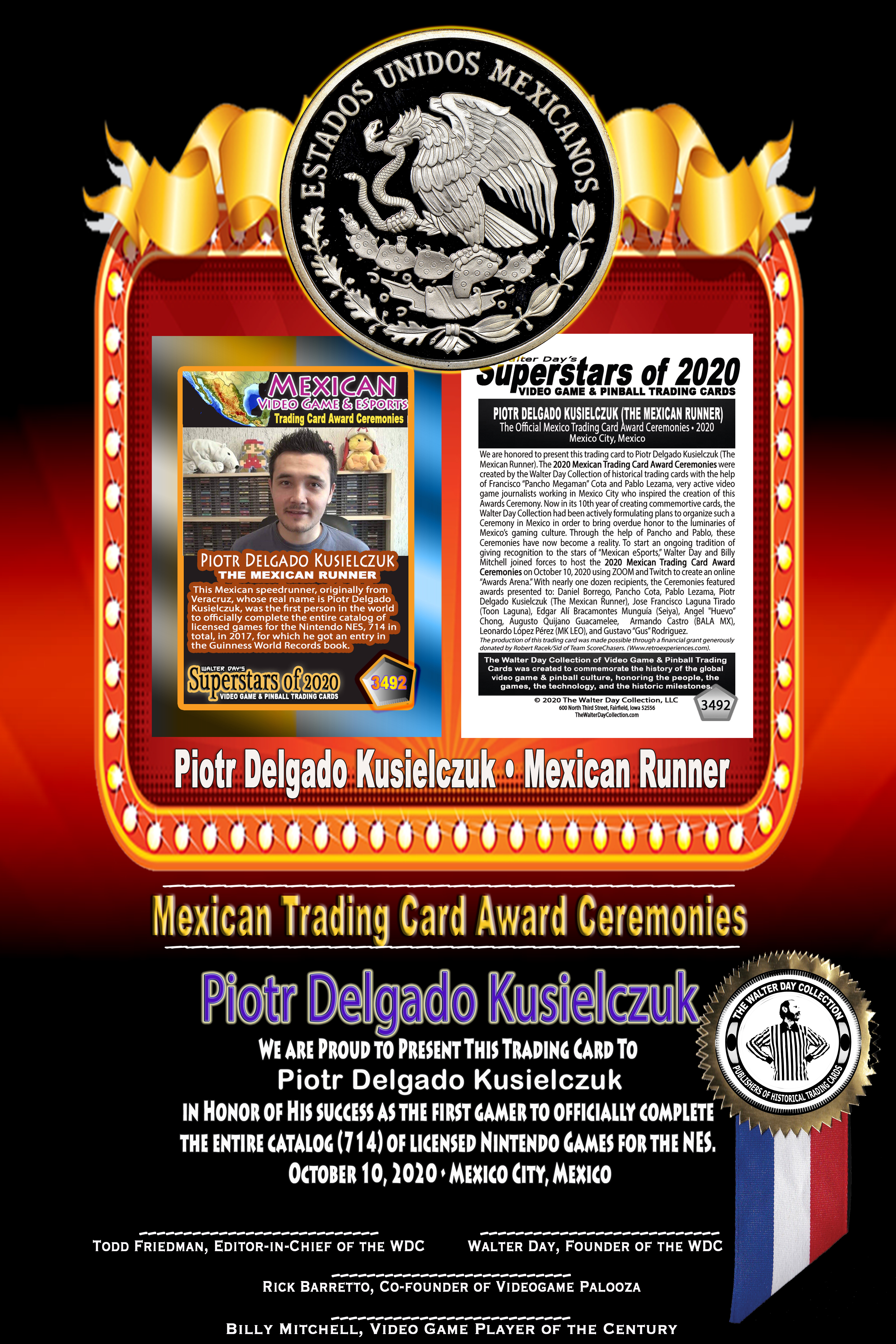 Pioneer - I feel like he is always thinking about new ways to present gaming to the world and he makes a good decisions teaming up with people but mainly everything started from a basic idea in his mind so he makes his ideas happen by making strong connections.

Yes I do, because I can relate a lot and also open the mind of people to think out of the box and try to understand gamers.

Dark Queen of Battletoads, I really like her in every aspect, she is the perfect villain female character. Nice looking, great dialogs, amazing attacks, feared by many.

What springs to mind when you hear the term ‘Nintendo’?

"The Mexican Runner - Adventures in Mamesland" the main character will be TMR and it will be basically a biography of my life but made in a very interesting and entertaining way with shooting & platforming section, a very well written story. It will include NESMania Quest and Speedruns. And of course, the story will go around taking care of my mom.

What is another system you are trying to beat every game on and when are going to attempt?

Since I beat one system the logical "next" for people to think is what console is next? But NESMania was made out of the deep love that I had for the NES console since it was the one, I played my whole childhood (since I didn't own any other console as a kid). So even if I would try any other console It wouldn't have the same sentimental value for me, so I don't see myself doing that, but I have let know people that if I get a single 10K USD donation I would do SNESMania.

Are you still involved with speed runs today, and what are some of your goals going forward?

While I'm not active at the very top level of beating a world record anymore, my goals for now are to get good at many NES games, that way I can provide joy for people playing their lovely games while also showing off some tricks here and there. Also, my plan is to be able to beat 100 games in one sitting, so I need to learn many games to achieve that.

I see it more evolved in the area of Virtual Reality, there is a whole world to explore and we are in early stages, about the rest I see pretty much the same as it is today, crowd oriented games, e-sports gaming and PC/console games.