Our next Trading Card Spotlight features Sean McCauley, who’s artwork is currently is displayed on card number 2354, from the Superstars of 2015 Collection.  Sean created the artwork for PAPA 17  (Pro and Amateur Pinball Association). Currently, Sean is the Senior Art Director at 321Blink, a marketing and advertising agency with a presence in Pittsburgh and Central PA. He continues to do freelance design and illustration. His latest work in the pinball/arcade space was for the 2019 Stern Pinball Pro Circuit. You can see Sean’s work at his website - www.SeanMcCauleyDesign.com.

I think NOW is the best era for Pinball. Not in the sense that the "best" games are being made now. But in the sense that we now live in a world where we have access to all eras. Back in the day, a machine was at your local arcade for a while, and then it was gone. And maybe you didn't see it again...ever. But these days, we have huge retro gaming expos, we have pinball cafes, we have bars and restaurants that are once again stocking machines. And those might be 80's and 90's machines mixed with the latest brand-new Stern machines. This resurgence in pinball old and new is the best place to be if you ask me.

In your opinion, are there enough or too little Pinball and Arcade Expos and conferences held each year?

It seems like every big city has at least one annual Arcade/Pinball/Gaming event nowadays, which is great to see. I don't think there's such a thing as too many of those, but where I would like to see continued growth is in local arcades, or establishments that are once again including pinball and arcade games. It's cool to go to an event and play your ass off for a weekend, but I wish I had more options closer to home so that I could play out more regularly.

No, never would have imagined it! I was aware of the Walter Day Collection, but I never thought I would be a part of it. I got to go up on stage and be recognized at a big gaming convention, I got to sign my card for people. I felt like a rock star for a day thanks to Walter. And knowing that the card is out there, and that maybe it sparks somebody's imagination years from now or inspires them to create their own artwork is a bigger feeling than I have room for. I want to foremost use this opportunity to thank Walter and everybody involved with the cards for that. And also, to thank PAPA (Professional and Amateur Pinball Association) who gave my work a platform to be seen.

How did you get the job of doing the artwork for PAPA 17  (Pro and Amateur Pinball Association) ?

I attended my first PAPA pinball event around 2013, a time period when I had been out of work 2 years. Their facility had something like 400-500 pinball machines and arcade games, it was a heavenly place to be. Beyond that, I was blown away by all the great artwork they had on their merchandise, t-shirts, etc. As an out-of-work and frustrated artist, I was so inspired by what I saw that I went home and created the artwork you see on this card. In design/illustration, we call that "speculative" or "spec" work, where you create an unsolicited design and hope that maybe a client will want to use it. It's not exactly a business plan, but in this case I just felt so motivated to share it with them.  Almost as a way of repaying them for rekindling my creativity. After a few failed attempts to get it in front of them, a mutual friend was able to make the connection and they loved it. "PAPA 17" was the 17th World Pinball Championships event, and this design was used on posters and t-shirts. I went on to work with them for 4-5 years doing designs for pinball tournaments as well as REPLAY FX, an annual gaming and pinball convention in Pittsburgh, PA. You can find out more about their events at PAPA.org.

What is your favorite memory or favorite artwork you have done so far?

My favorite pinball shirt design is the one I did for the PAPA Circuit Tournament 2017-18 (now part of the Stern Pro Circuit). Being a national and international tourney, I was thinking about concepts of travelling, hitting the road, and how to fold that into a pinball theme.  In the end, I pulled visual cues from a variety of sources such as Ed Roth's Rat Fink and Hot Wheels toys to create a tire-smoking pinball hot rod monster. That was one where you don't feel like you're working because you're having so much fun. I remember asking PAPA to add another color to the design so that the monster's tongue and the exhaust flames could be red. In screen printing, you usually pay the printer more for each additional color. They agreed, and it came out perfectly. 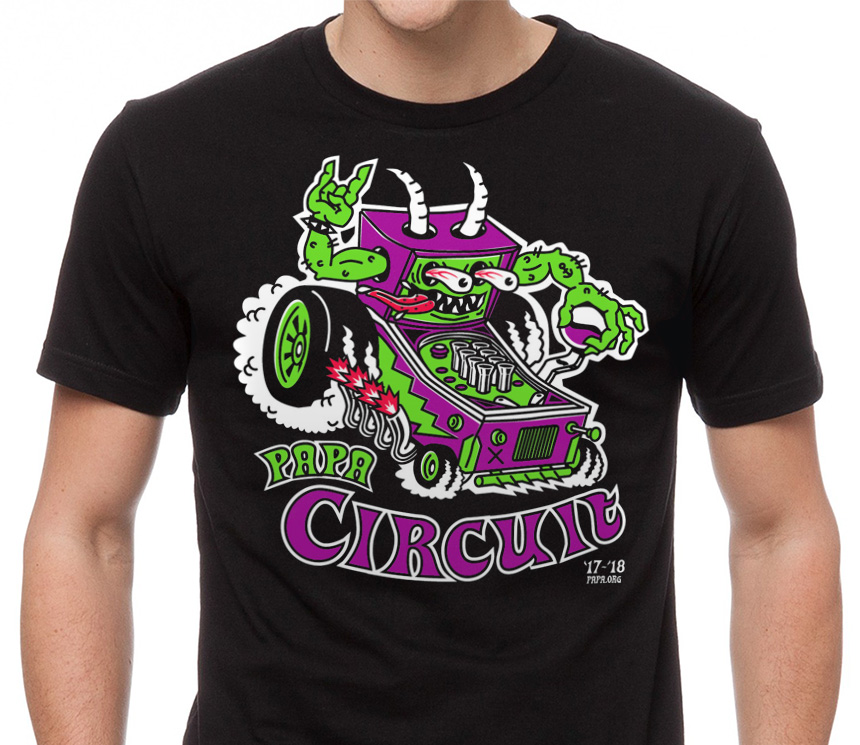 That's a great question. I'm actually a really big fan of video pinball games, but mainly the ones that are originally designed for the screen, as opposed to the ones that attempt to recreate existing physical games. Some of my favorite tables on Pinball FX3 are DOOM, Alien Vs Predator, and even though it's the freebie table, Sorcerer's Lair. On retro consoles I love Alien/Devil's Crush on TurboGrafx-16 and Crue Ball, a Motley Crue themed pinball game on Sega Genesis. Also, shout out to Space Cadet 3D Pinball, which was packaged with Windows OS's in the late 90's. I wasted a lot of time playing that while waiting for the dial-up modem to connect.

I don't think I can pull that info from the memory banks. Frankly, I was way more into video games growing up because I had no idea HOW to play pinball, I really sucked at it. I didn't understand modes, missions etc, so I was just trying to keep the ball in play back then. I only got excited by pinball much later, at the time when I started going to PAPA events. And that had to do with gaining the knowledge of how to play by hanging around people who knew the ropes. That's part of the social aspect of pinball. You get better when you play with people who are better than you. Of course, kids coming up for the last 10 years or so also have the benefit of being able to watch people play online.

When did you start drawing and creating artwork?

I have been drawing since I can remember. My Mother used to bring home the dot matrix printer paper from work for me to draw on. That would be the kind with alternating green lines and holes down both sides for anybody old enough to remember that. I would spend a lot of time drawing space vehicles, robots, ninjas, aliens, all the usual awesome kid's stuff. I ended up getting a Bachelor of FIne Arts degree, and at college was the first place that I started using a computer to create artwork as well as graphic design. Graphic design became my primary gig in life, but then I started getting into illustration, and also getting back to my fine art roots.

Walter is a.... Promoter, in the best and most positive sense of the word. He recognizes the greatness in people, and then seeks to lift them up and share that greatness and talent with the world. That's where Twin Galaxies came from, a way to promote the best gamers, and that's what the Superstars card series does for an even larger cross section of people involved in gaming culture. To use more than one word: Walter is the rising tide that lifts all ships.

My favorite machine when I can get a chance to play it is Guns N Roses. It’s kind of just ticks all of the boxes for me in terms of artwork, playfield and ramps, and of course music. Plus, it hails back to a certain time in life that I enjoyed. The bummer is that you don't see them around much. Or at least I don't. Have toyed with the idea of getting one someday, but I need a lot more t-shirt gigs first. Haha.

What does it take to be a pinball artist?

It's all about the secondary theme, meaning what is it going to be about OTHER THAN pinball itself. There are many well-worn tropes in the pinball world, from sci-fi to medieval themes and they have been done to death. If you don't have an established IP (intellectual property) to rely on, like a movie or band, the challenge is to do something new, but still keep it familiar to pinball fans. For the PAPA 17 design, I actually turned that on its head a bit by returning to the image of the pinball itself for inspiration. Stylistically, there's a lot of room for different visual styles from realistic to cartoony, from dark to humorous.

In terms of improving skills and going for scores, I would say I prefer to play alone. I experience pinball more as man vs the machine, rather than player vs player. In a social setting, I'd prefer to think I play "with" people rather than "against" them. I'm as much rooting for them to have a great game as myself.

What are you working on now and where can we see your artwork?

Currently, I'm a Senior Art Director at 321Blink, a marketing and advertising agency with a presence in Pittsburgh and Central PA. I continue to do freelance design and illustration, my latest work in the pinball/arcade space was for the 2019 Stern Pinball Pro Circuit, another fun project. Also, in 2019, I had my first ever fine art exhibition called Bad Feels. For that, I combined my commercial art sensibilities with a very personal look inward, which was new for me. You can see a lot of the work mentioned in this interview plus more on my portfolio site: www.SeanMcCauleyDesign.com. 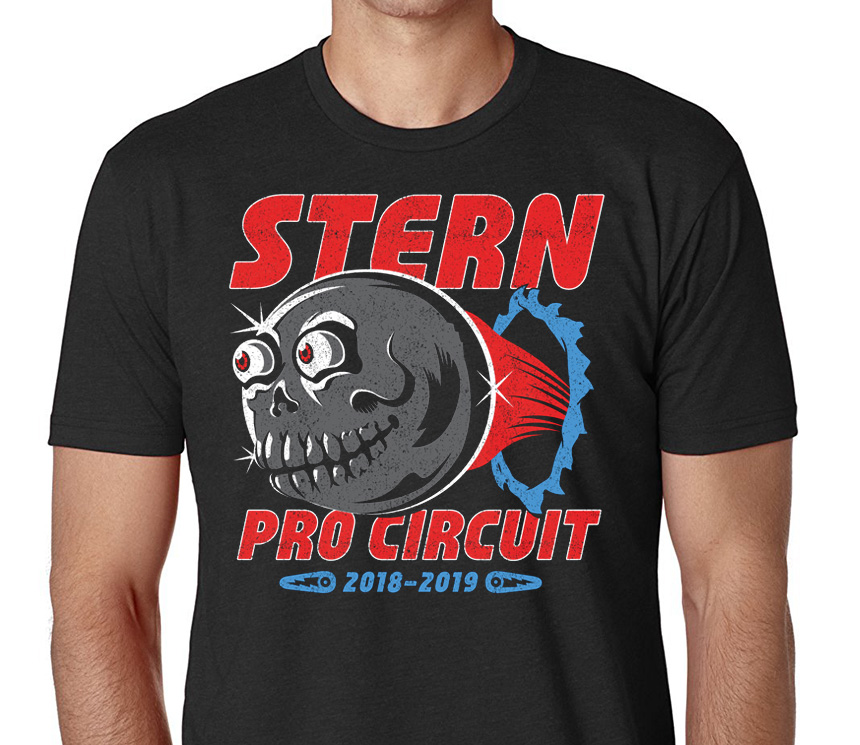 Where do you see pinball in the next 20 years?

One area that will certainly continue to expand is virtual pinball machines in the home. Right now, I see that Arcade1up (makers of low-cost arcade games) are set to release a home digital pinball multi-machine running games from PinballFX3. VR is a real asset for those looking to recreate a physical pinball experience and I can imagine more happening there. Personally, I've wondered whether we could see physical machines that incorporate visual special effects such as holograms. Imagine a real pinball machine where the ball gains an effect where it visually appears to be trailing fire, and then in another mode to be frozen, with frost and flecks of ice trailing behind. Sounds crazy, but in 20 years who knows.