Written by Todd Friedman on 01 May 2020. Posted in Trading Card Spotlight 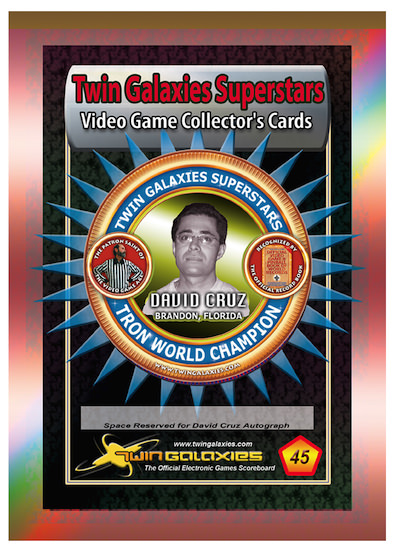 Our next Trading Card Spotlight features David Cruz who currently is displayed on card number 45, from the Superstars of 2011 Collection.  David is also featured on trading cards 1253, 1258, and 1752.  David is an all-around great game player. David shares the Pac-Man record with a Perfect game that he has achieved 3 times. His game of choice is  the arcade game Tron where he has numerous world records and has battled others in many tournaments. One recent one was in 2014 where he battled John Salter in the "Battle for the Grid" on Tron arcade machine. David has other world records such as Vs. Duck Hunt and Vs. Hogan’s alley for the arcade. David has also experienced iron man status while playing Tron for almost 23 hours straight on one game.

There is something to be said about better graphics in the newer games, but without good or great gameplay, they are not worth it. That said, there are many great games now. But nothing compares to our favorite classic arcade games. I wouldn’t hesitate to go for a marathon run on a classic arcade game. I don’t see myself trying that on any newer games. Either they don’t support it or they’re not worth that mind of effort.

The first video game I remember playing was most likely Donkey Kong. It was in the corner store. I would bring a bunch of quarters and just play.

When I was young, I knew I had a talent for video games which exist to this day. I would challenge others and literally make people walk away because their next turn was at least an hour away. I didn’t play for official records since I didn’t know anyone seriously tracked them. Naturally, once I found out about Twin Galaxies, that changed. It is an honor to be on a Video Game Trading card. I never knew I would be on one.

My favorite portable gaming device is my 3DS XL. I really enjoy it because I can easily play it anywhere. I have lots of records on it.

If always like PC gaming because Of the better graphics. However, I played the Wii a lot. I think it all comes down to which game I want to play.

I like puzzle type games that also require quick reflexes and quick thinking. I play the Mario vs Donkey Kong series and have nearly every record on it.

That’s an easy one. Tron and Tron Legacy. Tron was always the one game that I really liked, and I wanted to always be the best at it.

Nintendo is my favorite and near exclusive company. They make the games that I want to play. They have so many great titles that I must had to have. That hasn’t changed.

A good journalist has to have a passion for what they’re writing about and of course, they have to be able to write well and be able to draw their audience in with their words.

I have not received coverage for being on a Video Game Trading card. I did receive coverage for my Tron world record though.

Caring. Walter leaves a lasting impression on you with the way he treats everyone. He’s one of the nicest people I know.

Good game music helps keep a game alive and fresh even many years later just because you heard some of the music in the game. The music in Tron makes it so much easier to want to play for 24 hours straight.

Games are made for everyone. Some people would disagree, but then they’re probably not very good at video games. The first time you give a game that you think is too hard for a child and you watch them get very good at it, you realize that games are for everyone and helps in so many ways.

I think some games are too violent. Do they lead to violence? Only in the wrong hands. In that case, anything would lead to violence. A good series (even if it’s violent) is about winning the game and enjoying the journey. The violence is not looked at as real world. It’s just part of the story to make the game compelling.

I usually always prefer the single player modes in games. Especially if I’m going for a record on it.

I will play multiplayer with friends occasionally. I don’t play massive multiplayer due to them taking up too much time and most people don’t know how to walk away.

I would answer Nintendo since I play so much Nintendo games. This is obviously going to vary for each player.

Some games can cause stress. If you’re enjoying what you’re playing and having fun, then they will relieve stress.

If the movie is very good, then I can appreciate Hollywood making a movie from a video game. Some of them are not worth seeing. Tron and Tomb Raider were good video game movies.

Yoshi is my favorite video game character. I just like Yoshi. I can’t think of a game where Yoshi has an advantage.

If it’s a good game, then I want to play.

Gameplay has to be the most important. A great game will have all 5 or at least the first 3. A game without great gameplay will not get played by me.

My favorite single player game if I had to choose just one would be Tron.

My favorite multiplayer game would be Mario Kart.

Maybe I would create a game like the Mario vs Donkey Kong series in virtual reality with me as the main character.

I still play and go for records. I like to take on new challenges or improve and perfect games to simply make them look easy.

That’s going to be interesting. I honestly have no idea. I do want to see more virtual reality type games where you are the character. That would really be something. I know that kind of exist already. I want to see it taken beyond what we have now.