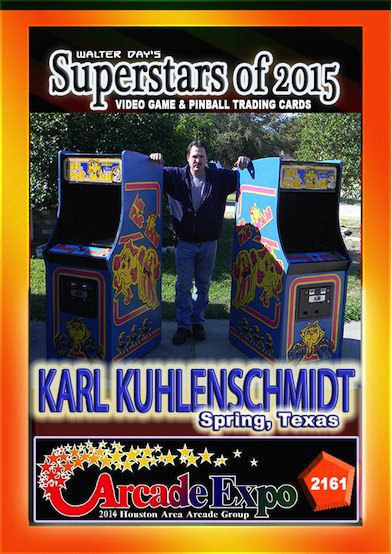 Our next Trading Card Spotlight features Karl Kuhlenschmidt who currently is displayed on card number 2161, from the Superstars of 2015 Collection.  Karl is an avid arcade preservationist, who loves to fix and restore old classic arcade machines to keep the nostalgia alive.  His first and most loved arcade cabinet he restored was the “Discs of Tron.” He would paint the exact details of his preserved machine to make it look like the original.  Every aspect of the details was carefully represented.  Karl also put his hands in preserving pinball and jukebox machines.  His love for the 70’s, 80’s and 90’s keeps him busy with his experience in the preservation world.

I guess it depends on your level of passion for classic machines.  With the internet, it is easier to find information and photos on a machine to restore.  Advancements on printing techniques and materials can make it easier to restore.

No, and I never did think I would own an actual arcade machine.

The 2015 Houston Area Arcade Expo.  A group of us were given our cards and I believe Billy Mitchell was there.

If you could describe Walter Day in one word, what would it be and why?

Game-changer because he did something that would unite the arcade groups by keeping official record of high scores (pre-internet).

I love to play Tron, Frontline, and Karate Champ. Action and military are my favorite genres.

If you could have only one arcade game or pinball game, what would it be and why?

I love laser disc games, but they are hard to keep working.  There was a prototype by Atari.  It was Battlestar Galactica—it was in the development stage, but never finished.

A classic arcade was full of sounds from arcade and pinball machines.  After a while, you could tell what the machine was just by hearing it.  No more catchy themes like Pac Man, Donkey Kong, Defender, and Tron.

Are arcades aimed mainly at children, adolescents, or adults?

The sad part is you cannot use the word arcade anymore or game room.  It’s being used for poker machines or 8liners.  Now you have to give it a catchy name for people to know it has real arcade and pinball machines inside.

Do you believe some arcade games are too violent and lead to violence in America today?

No, but there will always be arguments about how they give kids bad ideas or information.  Kids have so much input from the internet or cable, but that is where proper parenting comes into play.  Don’t let these mediums be the ones babysitting your children.  Install good parental skills and they should be alright.  Remember the first Grand Theft Auto or Mortal Kombat.

The days of being in the arcade or having home counsel’s “pre-internet” are a thing of the past, putting in a quarter on an arcade machine was to challenge someone in person face-to-face.  Now you’re playing a 15-minute round, talking smack.  Before you had to face a person, win or lose, know your opponent.  You had to know the game, know the patterns.

I learned, as a kid, that $5 did not go as far as you would like.  I had to find a way to make more money to go to the arcade.  Laserdisc games did not give you your money’s worth; too short game play for .50 or a dollar.

It’s TRON.  The arcade machine actually made more money than the original movie.  A sequel arcade machine (EDOT), and 28 years later returns and gets a sequel and a pinball machine which I have both machines.

What springs to mind when you hear the term Arcade?

Going to the mall, pocketful of quarters, seeing what new machine was there, and if you still had the high score on your favorite machine.

What is your favorite portable game device and why?

The Atari Lynx/if it had more game support, it could have surpassed the Gameboy as it had great sound, full color, and a great library of games.

EDOT (Environmental Discs of TRON) TRON was awesome, but when the EDOT came out, you got to step into the game which was in the movie and it actually talked to you.

A sequel to Firefox.  You are the son of Mitchell Gant.  Ace Pilot, who takes control of the new Firefox test program.

Pinball machines are making a comeback, but the price is getting out of hand for the average collector.  Arcade machines are moving towards the MAME area, online, and or counsel.  Machines from the eighties are wearing out and there are less people that know how to repair them.