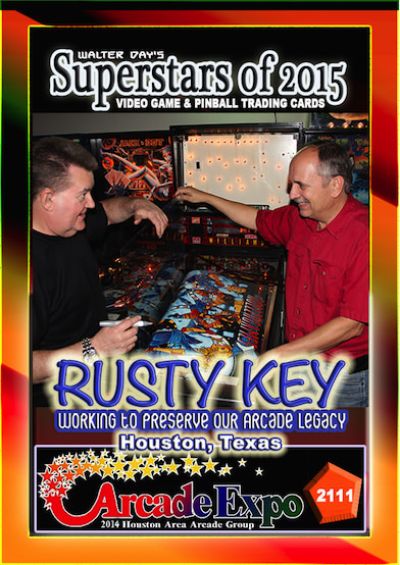 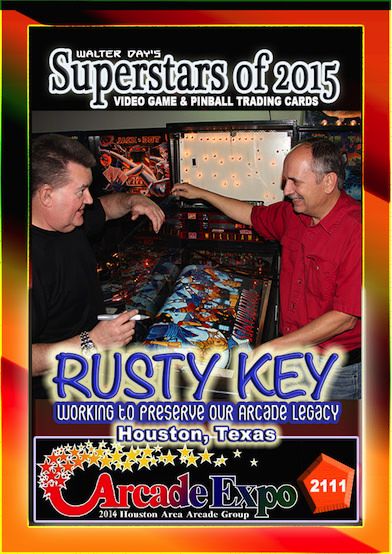 Our next Trading Card Spotlight features Rusty Key who is displayed on card number 2111, from the Superstars of 2015 Collection.  Rusty is a huge arcade preservationist, with an enormous collection of rare and arcade games.  By 2014, his arcade collection hit 30 machines, Rusty has made so many new friends with his hobby that really excites him to this day.  His enjoyment of meeting new people and socializing based on the arcade world is uplifting and life changing.   Rusty has over 15 pinball machines as well, starting off with the Valley Spectra IV rotating pinball machine which took a very long time to get running.

Money.  LOL.  And patience and the desire to think in terms of how things worked back with the arcades were king.  This is more than just atmosphere but learning to think in terms of older technology so you can repair games with the methods, tools and parts of the time.   To me, preserving arcade games is preserving them on the original platform not just recoding them to run on a computer.

Evil Knievel and I loved it more than the videos.  While the videos certainly was super appealing, it was the fact that I could win games that really appealed to me.  I didn’t have much money and making my quarters last was the most important thing!

My first arcade experiences were sparse as I grew up the a very small town in the 60’s and 70’s so there wasn’t much available unless we went to town.  There was a short lived (about a year) recreation center in my small town which I do remember, and it had the games I remember the most.  These were Evil Knievel pinball, Stunt Cycle and Space Invaders.

What are your opinions about today’s generation of arcade games?

How do you compare them to older, classic games?  To many buttons and too big!  But this change really came about in the 90s with the multi-player fighter games.  My feeble mind can’t handle 6 buttons and 8+ position joystick.  The really new ones are just really big, really flashy and the skill required is much less as it is more of just a timed play.

I never knew the Video game Trading cards even existed until you guys reached out.  But I never thought I would do anything to warrant that level of recognition and am humbled by it.

I only had a brief introduction to Walter Day at the Houston Arcade Expo.

I don’t play them much, but I am a bit of an odd ball as I like the WII console.  Is this considered portable?  I like the Wii as it requires full motion instead of just a thumb and finger push.

Oh original, absolutely.  You will never get the same experience with MAME as you do with the original board set.  To me playing the game as it was originally designed on the technology of its day gives a more nostalgic and generally a better image.

I play all types but still prefer Pinball.  I love the older EM games, especially the unique ones that have such amazing engineering designs such as the racers, shooters and other odd and wacky things.

If you could only have one arcade game, what would it be and why?

This goes against what I said earlier, but if I was limited to only one game, then it would be a MAME game.  I make this recommendation a lot, if you are limited in space, get a MAME and then as many pinball machines as you can fit.  Video games give you almost the same experience every time but with pinball, since so much is dependent upon physics the game changes constantly.  So, if it would be just one game, then Pinball and if I had to pick just one pin, the I would have to keep my Back To The Future game.

Arcade music has a huge influence on how games play.  Music can add excitement, drama and even irritation.   Music in games is very much a part of the design and how one feels when playing.  I love playing Phoenix just for to listen to Fur Elise in the second level.  And there are some games that the music/sounds of specific level just get under my skin and makes me play worse… as it was designed to do.

Are arcades aimed mainly at children, adolescents or adults?

New arcades are always aimed at the adolescents of the day.  Children’s money is controlled by the parents.  Adults tend to spend less and want more for their buck.  Adolescents don’t care what it cost, and their attention span is short which fits perfectly with the business model of arcade games of short play for decent money with just enough challenge to get another paid game from the player.

Do you believe some arcade games are too violent and lead to violence in America today?

No.  I do think the advent of super addictive games on phones and consoles, both online and offline, is keeping people from living a non-electronic life.

Gotta be with friends.  Life is about sharing joys with others.  Besides, trash talking yourself is no fun!

That’s a tough one and one I haven’t really ever thought about.  For me each game stands in its own merits and every successful company has made some good games or they wouldn’t be successful or last very long.

Yes, the value of a quarter.  When Dragon’s Lair came out, I was totally amazed at the game play and couldn’t wait to play it.  Then I stepped up to play and found it was 50 cents.  That was twice the price!  Cool game, so I dropped 2 quarters.  15 seconds later. game over.  What?  Okay, drop two more quarters and try again.  25 seconds later… game over.  You’re kidding me!  I just wasted a dollar and there was no skill, just memorization!  Screw this, I am going play games where my quarter last longer!

Yes, especially if played with friends!

Really don’t have a favorite character.  Although there is nothing as frustrating and yet somewhat sadistically rewarding as watching that frog get squished.

What springs to mind when you hear the term ‘arcade?

My place?  Seriously though, arcade to me is that bastion of sounds, music, black lights and laughter that it was in the 80’s and what we try to recreate at The Game Preserve.

Do you find boss battles to be the best part of an arcade game?

Some.  Obviously defeating the boss and winning/completing a game is huge but some boss battles can just be too difficult to be fun, some are anticlimactic, and some are just so vastly different from the previous game play that I wonder what’s the point.

That changes, probably because I am exposed to so many on a daily basis.  I do like Arkanoid and Ms. Pac-Man.

If you can design your own game, what would it be about and who would be the main character?  I think it would be a combination racing, zombie killing, space flying maze game with a busty heroine that takes only a four-way joystick and single button!  Oh, can this be a pinball too?

That is tough.  I think the retro arcade industry will be going strong for the next 10 years but after that I see it slowly dying away as those that remember the ‘arcades back in the day’ stop going to the arcades.