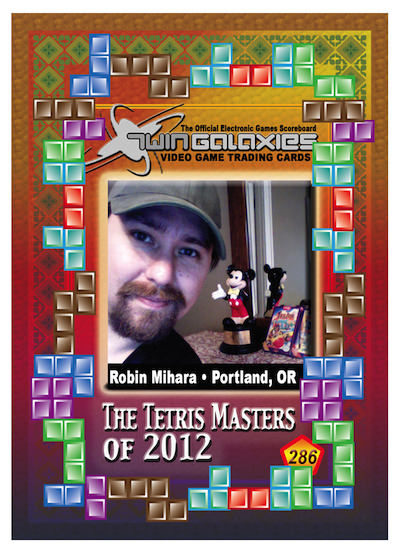 Our next Trading Card Spotlight features Robin Mihara, who currently is displayed on card number 286, from the Superstars of 2012 Collection.  Robin is one of the top Tetris players in the world.  His preference is the NES version and has been playing since its release in the 1980’s.  Robin starred in and produced the documentary ‘Ecstasy of Order’, which about the Classic Tetris World Championship (CTWC) and top competitors in the world.  Robin is also known as participating in the 1990 Nintendo World Championships, which he came in third place.  Robin traveled over 30 cities in 1991 to compete in the Disney Capcom Play Tour.  Traveling and playing NES games against others was a true honor.

When did you first play Tetris and what do you remember about it?

I first played Tetris as a rental shortly after it was released.  I thought it was tedious and did not enjoy it at all.  I ended up buying it when the Nintendo World Championships (1990) came to Portland and I realized it was a deeper game with a very high skill-cap.

What does it take to be a world champion on a video game?

In my day, it took a lot of practice to go along with your gifts.  Stealing strategy (and improving on it) was a big part of winning when it came down to it.  I would not recommend being a world champion at anything unless you are naturally obsessive, and you have to choose something.  To be great, you have to turn your back on so many other aspects of life that you could be experiencing.  Video games are fun, but they are fake-life.  Go experience real life!

What are some tips and advice you have for being successful at Tetris?

Watch Jonas play and study how he doesn't die.  Once you can handle it, only play level 19 (the fastest starting speed)

I believe it was Asteroids (arcade) in my local ice cream shop.  I remember getting 9th place and thinking it was kind of fun.

They are a bit much for me.  Too many buttons, too realistic, full blown movies, pay to win, pay for extra content, pay for skins... I'm old (for a gamer) and prefer it simple.

I think the first time I met Walter in person was when he presented me with my award in Southern California.

I don't think I could describe him in several words if I knew him well enough, which I don't.  I do think the most interesting thing I know about him is his transcendental meditation practice.

What is your opinion on Tetris 99 and how often do you play?

I'm glad when a version of Tetris gets some popularity.  I don't have a switch and I don't understand the differences in the gameplay.  I do not play it (tried it once).

Do you prefer arcade or console Tetris gaming and why?

Console.  The licensed NES version of Tetris is the perfect version.

I don't play games, unless I'm humoring my kids.  We have fun with Diablo 3 because you can just pick it up, and the skill gap doesn't really affect the fun.

I think the most disposable income is still in the hands of adolescents.  I don't really follow the industry, though.

I don't know about too violent, but maybe too realistic with the violence.  Metal Slug was about as violent as it could get, when I was young, but it was cartoonish.  The level of realism in your average FPS today could be considered "training" for the next psycho about to make headlines.

Do you prefer playing Tetris alone, against friends or online against the world and why?

I prefer it with friends during competition, so it feels like there are stakes.

My favorite video game character is the T-bar in Tetris.  It almost always makes your situation easier.

What springs to mind when you hear the term ‘Tetris?

It would be about my kids trying to make it to adulthood and be happy.  That's what I focus on in life most, so it makes sense that I would design that.

I am a competitor at the Classic Tetris World Championships. My goal is to qualify every year.

Full VR masking the real world from us.  Gamers streaming, subscribing and watching ads, neglecting health, face to face friendships, and loved ones.  Eventually we will fully integrate and become one with the games.