What is the best way to find your book and to order it?

It’s available on Amazon, Barnes, and Noble, Books a Million, Walmart, Target, wherever fine books are sold online. However, the best place to get it is my official site, PatrickHickeyJr.com. I personalize every book that is purchased through there and always slip in cool surprises like stickers, buttons, baseball cards for my customers. I want to create a one-of-a-kind experience for them.

Lots of dedication. It’s so much more than liking games or being good at them. it’s about understanding the people that make them, respecting them and being able to be unbiased. Most importantly, however, it’s about writing, every day and making a constant effort to get better. If you can check off all of those boxes, you can do this. 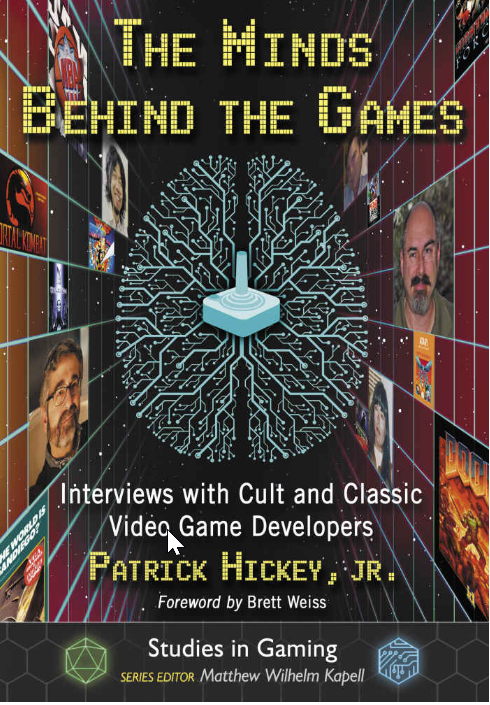 What advice do you have for others who want to write about the gaming industry today?

Read gaming news and features every single day. Reach out to other writers. Learn from them. Then start developing your craft. Earn the respect of others. It goes a tremendous way.

That was always the dream. My initial goal as a kid was to be a pro athlete, but a serious car accident at 18 robbed me of that opportunity. To have this happen, however, is ten times as sweet.

I have never met him, sadly. If I did, I’d give him a big old hug for everything he’s done for the industry and eSports.

It was probably Super Mario Bros. RBI Baseball or Ice Hockey were the first games I actively have memories of. being able to play a game of baseball with my favorite players or get in a virtual hockey fight with my dad created hours of fun. I still play both RBI and Ice Hockey regularly. RBI is also featured in my upcoming book, The Minds Behind the Sports Games, where I interviewed the game’s programmer Peter Lipson.

I think they have a more cinematic feel. The staffs are larger and sadly, they are usually far too easy. For me, nothing was better than playing a game with no cheats or walkthroughs and waiting for lunch at school to discuss strategy with my friends. Today’s games just don’t have that. That’s one of the reasons why I got involved in gaming as a voice-actor, Story Editor and writer.

Are you still involved with video gaming today, and what role do you play?

Yes, I am. I was the voice actor of the main character and Story Editor for the 2019 Switch, Xbox One and PlayStation 4 Survival Horror game, The Padre. I am also the writer for the upcoming game, KROOM, which I am working on with Pete and Jeff Paquette of Orange Door Studios. It’s a love letter to all the amazing 8-bit games we grew up playing. It’s got an amazing soundtrack and is a blast. I can’t wait for people to check it out.

The Game Boy. Pokemon Red and Blue and Tetris alone should be staples in everyone’s library.

Console gaming, mainly because I didn’t have the money as a kid to afford a PC. I do love my Steam account now, but I will admit being somewhat addicted to my Nintendo Switch.

I play mainly indie games but have a soft spot for Fallout, NHL and Pokémon. Those are essentially the only games I really pay out of pocket for. Everything else I play is for book research (so tons of retro games), reviews and features for Review Fix and Old School Gamer Magazine.

What games form the golden years (the 70s and 80s) were your favorite and why?

Berzerk for me is still such an amazing shooter and one that I’d love to see revived in one way or anything. Its sense of atmosphere is unparalleled, and the simple shooting gameplay has aged wonderfully.

Probably Teenage Mutant Ninja Turtles: Turtles in Time. Too many memories there. It’s the best beat-em-up I’ve ever played in an arcade. That, or NBA Jam. Boomshakalaka.

I originally had a Genesis and got hooked on King’s Bounty, the NHL series, Wonder Boy in Monster Land, stuff like that. I then got a SNES and got bit with the Donkey Kong Country, Mario RPG and Super Castlevania IV bugs. I feel like real gamers never pick sides in console wars. Even now, while I appreciate the Switch and PS4 a ton, I’d never stray away too far from the XB1- there are amazing games on that console too and I will definitely get to them.

It sets the tone. Classic games, most of them, had amazing scores. Not so much today. I think it sets the bar higher for new franchises to try and create their own soundtracks, rather than use licensed soundtracks.

Anyone that says games are for kids, is simply put, a fool. I’m a full-time College Professor, have been one for over a decade and am surrounded by people that don’t take my work seriously. They say it’s kids stuff. Well, my response is, hmm, then why is it the leading form of pop culture in the world? The problem is, there are still millions of people in the world that weren’t exposed to games as a kid and those are the people signing checks for everyone else. In 20 years, it’ll be a lot different.

Absolutely not. I think people need to watch their kids more. Games have a rating system for a reason.

I prefer to play alone these days, mainly because of how much little free time I have to myself. When I’m gaming, it’s to relax or to work on a piece or a book- that time is usually fleeting, and I don’t have time to wait for people to get into a lobby.

Ah man, that’s so difficult. It really depends on the genre. I love EA Sports games. Always will. Square-Enix made some remarkable RPGs that affected my life in a myriad of ways. And ah man, did Konami and Capcom make a deal with the devil in the 90s? They made countless amazing games.

Absolutely. NHLPA 93 was like my best friend as a kid, while Final Fantasy VII and Pokémon got me through those weird teenage years. Fallout 3 got me through my first year of teaching. New Vegas got me through Grad School.

I loved Detective Pikachu. Max Payne not so much.

I’m co-designing a game right now that I actually wrote the story for, so once it’s out, you’ll have the answer to that question :)