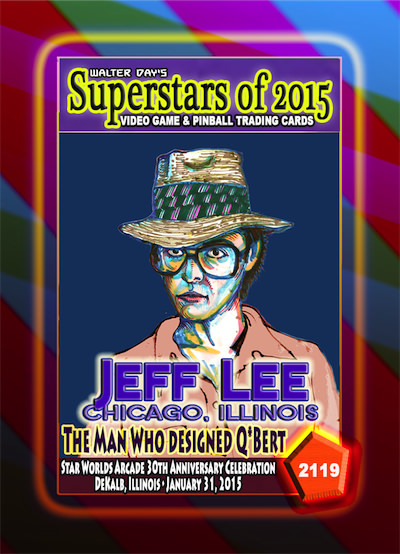 Our next Trading Card Spotlight features Jeff Lee, who is displayed on card number 2119, from the Superstars of 2015 Collection.   Jeff is also featured on trading card 2374.  Jeff is an extraordinary talented artist in the video game community, most known of course, as designing the character Q*bert.  Other arcade games on which he has displayed his artistic creativity are Mad Planets, Krull and Three Stooges.  In 2012, Lee illustrated the children's book "The Train to Christmas Town", written by Peggy Ellis.  You can see Jeff’s artistic talent by going to the following website: https://www.jeffreyplee.com/ .

What was the first game you developed and what was your impression?

The first video game I had a hand in developing (other than just providing the artwork) was “Q*bert”.  Early on in the development we had a feeling we were on to something.  And our hopes were realized by the critical and popular success of the game.

The first video game I worked on was “CAVEMAN”, a pinball/video hybrid.  I commenced work on it immediately upon being hired by Gottlieb Amusement Games in 1981.  Like many first-time experiences in life the memory remains vivid, although the accuracy of such recollections many years later is questionable.

There are too many of which to keep track and I certainly don’t attempt to.  Based my limited observation, I venture that everything is better...improved technologies (by orders of magnitude) resulting in unlimited sway in graphics and audio and new generations of designers completely at home in the industry.  Plus, today’s designers have complete access to the entire evolution of video games.  The advantages we had in the dawn of video games were novelty and challenge.  By virtue of chronology, we had the fortune to create and develop the genres which became classics and pave the way for the vast number of games today.  Of course, then as now, the mediocre and bad games outnumber the good ones.  But, some of that comes down to preference and as far as I know, no one is forced to play a bad game.

What are some of your favorite games you have worked on and why?

They were all fun to work on-- what could sweeter than making graphics for video games back then, when one artist could produce all of the graphics needed for a game?  You got to do design, animation, maybe even cabinets and realize the accomplishment of finishing a project.  Then a factory produced your labors and they went in arcades around the world.  Kids played your game and it was reviewed in magazines.  Pretty heady stuff, even when we worked anonymously.

We met at Star Worlds Arcade in January 2015.

What is your favorite game you have worked on in your career?

Industrious.  The breadth and volume of the cards he produces and the frequency of public appearances.

iPad or iPhone, but I don’t play much besides card games and crosswords.

Do you prefer Arcade or Console gaming and why?

Neither...being a dinosaur, I prefer a desktop PC and I play DDO, VASSAL and on other RPG-chat forums.

What does it take to be a video game creator, and what advice would you give a person today who would like to get into the industry?

Love of games, a broad-based general knowledge with a number of in-depth specialties, a creative bent, a dedication to work hard and focus, an ability to work with and inspire others, a willingness to share credit where credit is due.  It is highly unlikely you can do it alone.

It’s not the best original source for a motion picture.  Films at their best are about stories and character and the audience is passive, other than reacting on an emotional level.  Typically, video games are about challenge and competition and the audience is mentally & physically involved in providing an outcome.  I doubt you can ever turn a game into what a film does best.

I must give you a self-serving answer and nominate Q*bert.   Here’s an odd-looking Everyman going about his simple task and he is beset by enemies, bad luck and spoilers.  When he meets his frequent doom, he cuts loose with expletives or a forlorn wail.  Who hasn’t been there?  But with pluck and wit the player can make Q*bert prevail.  And somehow that swarm of dignity has been invested with an adorable cuteness and affection by the fans which manifests itself into a personality far beyond whatever Warren, David and I created. Oh, and there’s Sonic...now, there’s a jaunty rascal!

I’m a life-long gamer (cards, board-games, RPGs, war-games), so I’ve participated in that, for my own amusement.  The whole retro-gaming scene caught me by surprise.  I’m working with one of my old colleagues, Tom Malinowski, on some ideas.  Maybe we’ll get one to where we like it someday and you’ll see it in an arcade.