Written by Todd Friedman on 24 May 2019. Posted in Trading Card Spotlight 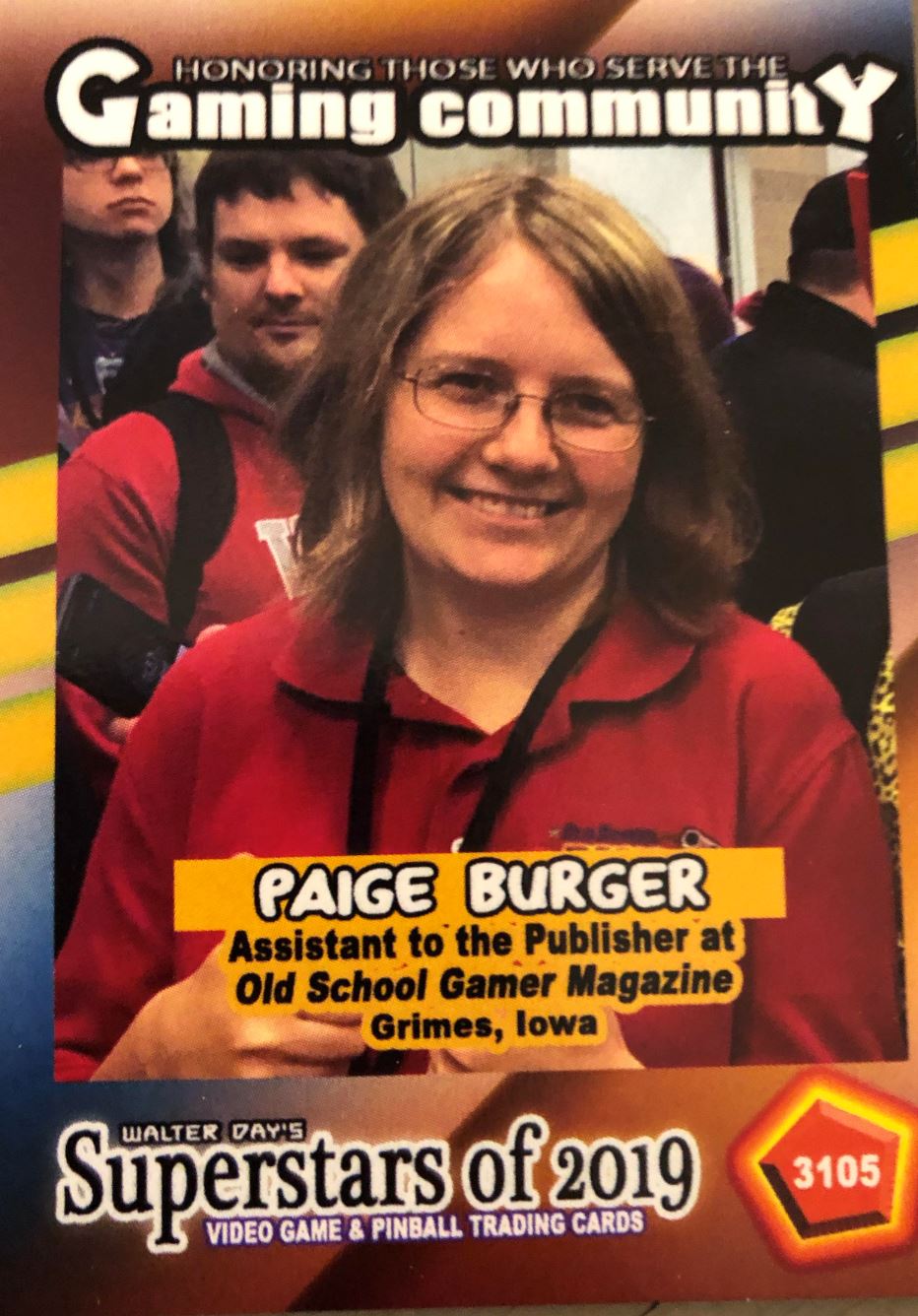 Our next Trading Card Spotlight features Paige Burger, who is displayed on card number 3105, from the Superstars of 2019 Collection.   Paige is part of the Old School Gamer Magazine crew.   Daughter of the creator and publisher, Paige has made a huge impact on promoting and signing up gamers for the magazine.   She travels to many of the conferences and works the OSG booth and is always excited to meet new people and explain the positive reasons to join the Old School subscribers.    Chances are when you see the Old School Gamer booth at your event,  she will be there with all smiles.

Henry (Hank) from FireWatch is One of my favorite characters. I’m not sure what exactly that makes him special, especially because I don’t even think of that game a lot but it might be that he is just a regular guy in his late 30s who has retreated from his messy life to work as a fire lookout in the Wyoming wilderness. I honestly like simple but complex characters like that.

What is your involvement with Old School Gamer Magazine?

I go to conventions and encourage people to sign up for the magazine. There are times at these conventions when I will compliment on someone's cosplay and ask for a picture. I would do this normally if I was at a convention for my own pleasure, but I think this helped attract people to the booth.

What are other types of magazines or books do you read other than Old School Gamer Magazine?

I have not read any other magazines in a couple of years, at least none that I read on a semi-regular basis. However, I do like to read plenty of books of the fictional genre. Some of the books I like to read would include the following; Harry Potter, Doctor Who themed books, Lord of the Rings, and Percy Jackson

While I know it wasn’t my first video game that I ever played, the first one that I can remember playing was a Wii sports game. I remember loving to play what to me at the time was a nice variety of types of sports to play on days when it was tough to play outside. If I were to pick a game that could get me just as much exercise if not more in today’s day and age as those games, I would pick Beat Saber. It’s fun to move to and if you really get into moving to the music as you hit those beats, you can really get some good exercise out of it.

Detroit Become Human and Gmod: prop hunt. Detroit, because there are so many great characters and you can end the game with more than 1000 different combinations, with more than 40 basic endings. Prop hunt, with its basic hide and seek gameplay and finding ways to not be found by or to find either strangers or your friends.

I love story-driven games, especially when they are ones where the choices you as a player make has an impact on the story. A few examples of games that I adore are Undertale, Detroit Become Human, God of War, The last of Us, Beyond two Souls, Dream Daddy, The Last Guardian, and Bendy & the Ink Machine.

However, I do love the multiple other times of games. The ones where you just try to survive (Don’t Starve, Stranded Deep, and Five Nights at Freddy’s), the stupid games (Muddy Heights, and Christmas Shopper Simulator), and the seemly simple games that can get very difficult very easily (Golf with your friends, Happy Wheels and House Flipper).

Basically, a lot of the games that I like to play are games off of websites like Steam and Newgrounds. However, how I hear about these games are from some well-known Let’s Players playing them a bit first. For example, people like Crankgameplays, Pixlpit, LordMinion77, Muyskerm, SuperMega, Get Good Gaming, Game Grumps, Markiplier, and Jacksepticeye. Just to name a few

I honestly don’t know, because they all have something that sets them apart from one and another. Something that keeps people coming back, whether it be pure nostalgia, fun gameplay, great characters, I don’t know. This was one of those questions you can take a long time on but still might not have a concrete answer for.

The music of any video game can either warn you or distract you from something that is about to come. It can put you in a mood to move a certain way when playing a video game. It can remind you of a game you played and can encourage you to play it again. It can help you come up with your own games that are sort of influenced by that music.

They would also teach their children that certain actions and phrases should stay inside the video game or that only adults can do them and why then they should be fine. Additionally, there is evidence that video games are actually good for people, however, too much of anything can be bad for you. Even things that people say that you can never have too much of, like fruits and vegetables.

It will usually depend on my mood, the type of game that is available for me to play. If I am feeling like I want to play with others but not anyone close to me, then I will play multiplayer online against or with some strangers. If not, then I can just find a game I want to play alone.

Naughty Dog is a nice company, but I might just bias on that I really like two of their games which are the Last of Us and Uncharted 4: A Thief's End which I think are both phenomenal. There are a lot of small video game companies that are starting out that already have amazing some games, but they just haven't gotten the attention they deserve yet.

Yes. For example, if you need to take your mind of something, a video game can easily do that for you if you allow it to. It also can be like a punching bag, with the right game, where you can take out your frustrations using it without harming to basically anyone around you.

Not necessarily, mostly because they are known for being bad however there is always a little bit of hope that they can at least bring something to the table. But you never know because I think there are a good number of movies that might have started as a video game movie or at least had heavy influence from at least one video game.

Interesting and fun ways to test your reaction skills.

My phone, because these days there are so many classic or just great games being turned into apps that I can play on my phone. If not that, then I would say my laptop, for basically the same reason. There are just a wide variety of online games that can be played on it that can be both old fashioned and/or new-aged.

Did you ever think you would be on a video game trading card?

Honestly, no. I was just having fun, helping out, going to conventions, seeing amazing cosplay, meeting a couple of people that I admire either from the internet, a movie, a tv show, or something else. I didn’t even know that I was getting one at all until literally as it was happening. While the picture they picked for the card is fine, they could have easily asked me to pick from a couple of different pictures and say that it was for the magazine, which technology it was, and I would have still been surprised to get my own card.

I believe it was at a Texas convention in 2017, the summer right before the magazine was to be published. It was either during the convention or on the way back when I think Old School Gamer Magazine was first thought up.

Kind, because he is so willing to do so much to please others and he has just such a kind soul.

If the games have a good build up to those boss battles, then they might be. If the bosses don’t have good build up, then usually they are not the best part of the game.

It would be about someone going through life, maybe you could choose what year in the past and where in the world. If I could, I would make it as historically accurate as possible, (before the player starts the game in the time and place that they have selected, I would make sure to summarize what life was for people back then), for the time periods and wherein the world during those time periods.

The main character is a basic character that you are given simple choices on how they look like. The character design would be like a very simplified way of designing a sim. The choices that you make as a player would impact what happens. If it cuts to a cut-scenes where it describes what is happening, the point of view could either be from the main character perspective or it would have them just out of view, to make it easier for the cut scene to be made.

I would want this kind of game because I see it as a way to educate in an interesting way about life in different time periods & how different they can be in the same place within a couple of years or how one place can be what another place was sort of like 100 years ago. I like to educate people in cool and fun ways sometimes.

Most if not all games could be in VR. That and more story-driven games, because these days there are video games that are so well made, that they are basically interactive movie/tv shows. Also, seeing as more and more of games being made for VR, it would make sense that they would just make everything VR, you can probably still play all different types of games you want but you would just control and view it in a different way. It would make it easier for companies to focus on making good games rather than things like the newest design for the console.