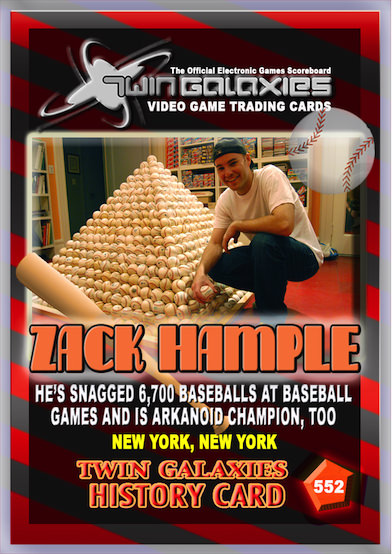 Our next Trading Card Spotlight features Zack Hample who currently is displayed on card number 552, from the Superstars of 2013 Collection.  Zack has been the Arkanoid world record holder since the year 2000 and has put up numerous scores on the arcade version.  He is also the world record holder on catching baseballs in the stands at the MLB games he has attended.   He has collected more than 10,000 balls and has appeared on “The Tonight Show with Jay Leno” for his accomplishment.  Zack has used his skills to write three baseball books and has used his collection to raise more than $200,000 for the charity Pitch In For Baseball.

What was the first game you ever purchased?

The first game I ever owned was some primitive Snoopy Tennis game around 1984 on a handheld device that only played that one game. I can’t remember the first game that I bought with my own money because when I was young and playing NES and SNES, the few games I had were all gifts, and I never owned any gaming systems after that.

What is your favorite part of collecting baseballs?

Feeling connected to the game and occasionally being a part of baseball history.

No chance. When I was growing up, my family allowed video games but didn’t celebrate them, so the whole concept of video game glory is still exciting to me after all these years.

Not that I’m aware of. I’ve been interviewed a ton because of baseball and every so often I’ll get asked about video games. I love that, but I don’t think the card has ever been mentioned.

I first spoke to him on the phone in February of 2000 when I broke the Arkanoid record. He and Steve Krogman called to “meet” and grill me about my strategies and methods to determine if I was full of shit, but they were both very nice and supportive. I first met Walter in person a few months later at the Funspot competition in Weirs Beach, New Hampshire.

Enthusiastic. That’s what you have to be in order to take a niche hobby and turn it into a mainstream phenomenon. He built an empire out of nothing. He was a pioneer. He had a vision.  He had to stay dedicated and upbeat and devoted in order to keep it going.

I remember playing Arkanoid for the first time on Shelter Island, NY. I was about nine years old, absolutely sucking at it, and throwing a tantrum. I loved the concept, but it took a while to get good at it, so those first few quarters went fast.

I’ve never gotten into newer games. It seems everything now is popular because of the graphics and intricate stories. I much prefer the older games which were all about reflexes and hand-eye coordination.

I would still be playing my old Nintendo games if I could get it or an emulator to work. Super Mario Bros. 1, 2, and 3 were my true loves, along with the first Legend of Zelda, the Tengen version Tetris, Dr. Mario, Jackal, and Life Force. Nowadays I pretty much only play Arkanoid.

I actually do own an Arkanoid machine! I love it so much but rarely play unless I have company over that wants to play.

Which Baseball Video Game is your favorite and why?

I’ve never been into any baseball video game. For me those games cheapen the real thing, and I have enough baseball in my life that I don’t need to play a simulated version.

I can only talk about how it influences me. I love it. I have a video game playlist of all my favorites from the 1980s, and just to show you how stuck in the past I am, that playlist exists in iTunes with actual MP3's that I once downloaded.

I think games are aimed at everyone. It seems just about everyone plays or has the potential to play and get obsessed.

Yes, without a doubt. The glorification of guns and violence in our culture is out of control. It truly blows my mind and angers me to the core that female nipples can’t be shown on TV but the depiction of people getting killed by gunfire is totally normal and acceptable. The world is so unbelievably dumb that it hurts.

I pretty much prefer to do everything in life with friends because I’m extroverted and love having company. I never got into online games, but I’m sure I could and would if I allowed myself.

Taito, clearly. Ha, I don’t know. That’s who made Arkanoid in 1986. I always loved Nintendo, but I don’t know enough about the industry to even have an opinion about who’s the best.

I think I’ve learned a lot from video games, starting with how to pay attention for long periods of time and how to be hyperaware and analytical. My reflexes in the real physical world are better, I think, as a result of having to react quickly to things on screen in games. My problem-solving skills are better too, and given the fact that I’ve spent a ton of time playing Arkanoid, I’m probably better at mental geometry than most people, for what that’s worth.

I think it depends on the type of the game and the type of person. I’ve gotten much more stressed when going for high scores on Arkanoid, but sure, there are lots of relaxing games out there, and it’s nice to unwind by playing.

Probably Mario from Super Mario Bros. because that’s basically what I grew up playing, so he’ll always hold a special place in my heart.

I feel like I’m giving the most boring answers, but Arkanoid for single players and I always loved the two-player team version of Tetris — the Tengen version on the original Nintendo. Both players’ pieces would fall into the same area, so you had to work together to make it all fit and clear lines. It forced constant chatter and communication and scheming.

People have suggested that there should be a ball hawking video game with me as the main character, or that I should be added into the bleachers in MLB The Show. That sounds pretty good to me, so hopefully one day that’ll happen.

I don’t have one, though I loved Gameboys back in the day. Playing Tetris against people and making their lines increase by playing well was so much fun.

Are you still collecting baseballs?  What is your ultimate goal?

I have no idea. I suppose 3D games and VR games will be huge. With technology in general, everything keeps getting more elaborate and interactive.  I would expect the same to be true for video games.