Our next Trading Card Spotlight features Alan Radue, who is displayed on card number 383, from the Superstars of 2012.  He is also featured on card 2210 from the Superstars of 2015.   Alan is the current world record holder on the arcade games Sea Wolf & Sprint 2.  Alan, who is a mechanical engineer in the automotive industry, created a home arcade in his hometown of Detroit, Michigan.  He called it Tranquility Base Arcade which was named after the Apollo 11 moon landing.  Opened in 2008, Alan has 25 vintage arcade games from the 'golden era' in his collection and in 2011 won the Home Game Room of the Year Award.   One area that stands out to other arcades are his personalized bar stools.  Alan designs customized Arcade bar Stools for his arcade as well as others.   He has graciously donated personalized bar stools for Richie Knucklez Kong Off tournaments.

I have a soft spot for Atari.  They were the only company that 'entered my home' when I was a kid through a pong console, the 2600 game console, the Atari 400 and eventually the Atari 800.  Playing a 'Real Atari Arcade Game' at an arcade was always a thrill back then and is still a thrill for me today!  That said there are so many wonderful arcade game manufacturers from my youth!

I first met Walter Day November 16, 2012 in Denver Colorado at the Kong Off 2 event.  I had corresponded with Walter since October 2011 when I was fortunate enough to set two worlds records on my favorite arcade games (Sprint 2 & Sea Wolf).  We became fast friends over the internet and continued our friendship ever since.  Walter was even kind enough at the Kong Off 3 (again in Denver, Colorado) to Skype with my girls who were HUGE 'Wreck it Ralph' fans and it was a thrill for them to be able to talk to 'Mr. Litwak'.  Walter wrote them a personal note about the experience and autographed it and it still hangs in my arcade to this very day!

Not a chance.  What a GREAT honor it has been to be involved with Walter Day and now call him my friend.

The last 'Arcade Expo' at Banning California utilized my card on their website which featured Richie Knucklez and I as their main banner for the Kong Off 6!  I signed autographs racing hydroplanes around the country for many years, but it is always special when asked to sign one of my trading cards!

Beneficent.  Doing acts of kindness or producing good.  If that doesn't sum up Walter, I don't know what other word does.

Unfortunately, today's games do not capture the same 'spirit' as classic video arcade games.  They are an amazing showcase of lights and technology but for me they seem to miss the element of 'being drawn to drop the next quarter to get a higher score or go further in the game'.  Of course, we are always drawn to the video arcade games from our youth and use them to set an unachievable bar for comparison purposes to anything we come across later in life.

I played so many back in the day it was a blur.  However, seeing the Evel Knievel pinball machine to this youngster sure was SOMETHING!  He was an iconic figure to so many through the 1970's.

I remember my Dad lifting me up, so I could peer into the latest EM games of the day in the early 1970's.  Games like Speedway, Sea Raider, Wild Kingdom and Grand Prix which all gave you the 'FIRST TIME' experience to hold the steering wheel of a race car or pull the trigger on a rifle - they were larger than life to me!  When video arcade games emerged games like Gun Fight, Sea Wolf, Sprint 2 were an absolute joy to be able to play.  As home consoles emerged, they never truly compared to the experience of being able to drop a quarter and get to play the 'Real Deal'!

All my 'portable gaming devices' weight at least 300lbs or more.  And I'm getting to old to carry them around anymore! ;-)  (meaning - I don't have one).

Original arcade no questions asked.  Pure nostalgia for me.  Each original arcade game has a special memory for me that I will always associate with that particular game.

Classic arcade games still to this very day.  Any video arcade game from the 1970's (B&W) through about 1984.  Visit www.tranquilitybasearcade.com to see the games my family and friends are playing!

If you could only have one arcade game or pinball game, what would it be and why?

Sprint 2.  It was the first 'real racing game' I was lucky enough to play over and over.  The cabinet design and colors just always draw a positive emotional response from me.  I'm lucky enough to own cabinet serial # 0068 in my collection which I cherish.

What does it take to be an Arcade publisher?

A free spirit and a lot of coffee.

How does Arcade music influence games past and present?

It is their 'ultimate iconic trademark'....as you can identify what game is playing just by hearing the first 1-2 seconds of their music/sound.

Are arcades aimed mainly at children, adolescents or adults?

I can honestly say owning a home arcade the last 11 years - it appeals to all genres.  Children....teen agers.... adults and even Grand Parents enjoy playing them!  Something about the simplicity of the game play of a classic arcade game hits the mark with everyone!

Do you believe some Arcade games are too violent and lead to violence in America today?

Not at all but then again, I have not experienced some of the games people claimed were too violent.

Not so much against friends.... but always playing with friends.  The conversation, comments, things people notice that you didn't......everything about creating a social group around the arcade games is the draw for me.  If you ever had the experience of walking into an arcade in the 1970's or 1980's you will NEVER forget that social experience.

Patience and Determination.  Two life skills everyone should possess. 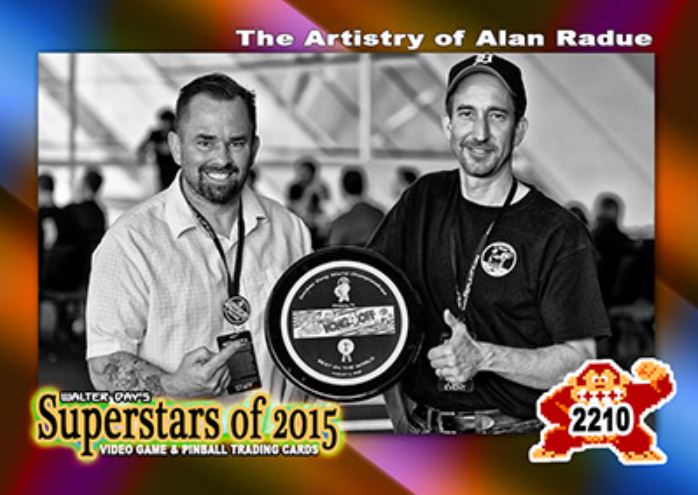 Or adding stress.  I would say both.  The bottom line is THEY ARE FUN!  I'll take 'stressful fun' over a great day at work anytime!

Pac-Man.  Because the ENTIRE world seems to know him.  How amazing is that?  A group of pixels that crosses borders and generations.

What springs to mind when you hear the term “Arcade”?

The incredible social meeting place of my youth.  Sounds, smells, lights.... constant action.  So many underlying dynamics going on at the same time.  I never realized how lucky I was growing up and experiencing the 'Arcade' but I'm sure glad I did!

Sprint 2.  It constantly challenges me.

It would be a time machine game where you drop a quarter in it, and it takes you back to the Arcade of your youth!  It would create 'that feeling' again but having your wisdom of today.  The main character would be the person willing to take a chance on a new experience and drop the quarter into a game he or she had never seen before.  Something we took for granted back then but would like to experience 'one more time'.

Where do you see Arcade games in the next 20 years?

Hopefully being kept alive through the efforts of collectors and people willing to do what it takes to preserve the history of these wonderful machines.  I believe history will never forget where it all started and the magic of interacting with something on a screen.  It was fascinating back then, it is fascinating now and I see the future staying on that same path.

Contact info:  This email address is being protected from spambots. You need JavaScript enabled to view it.