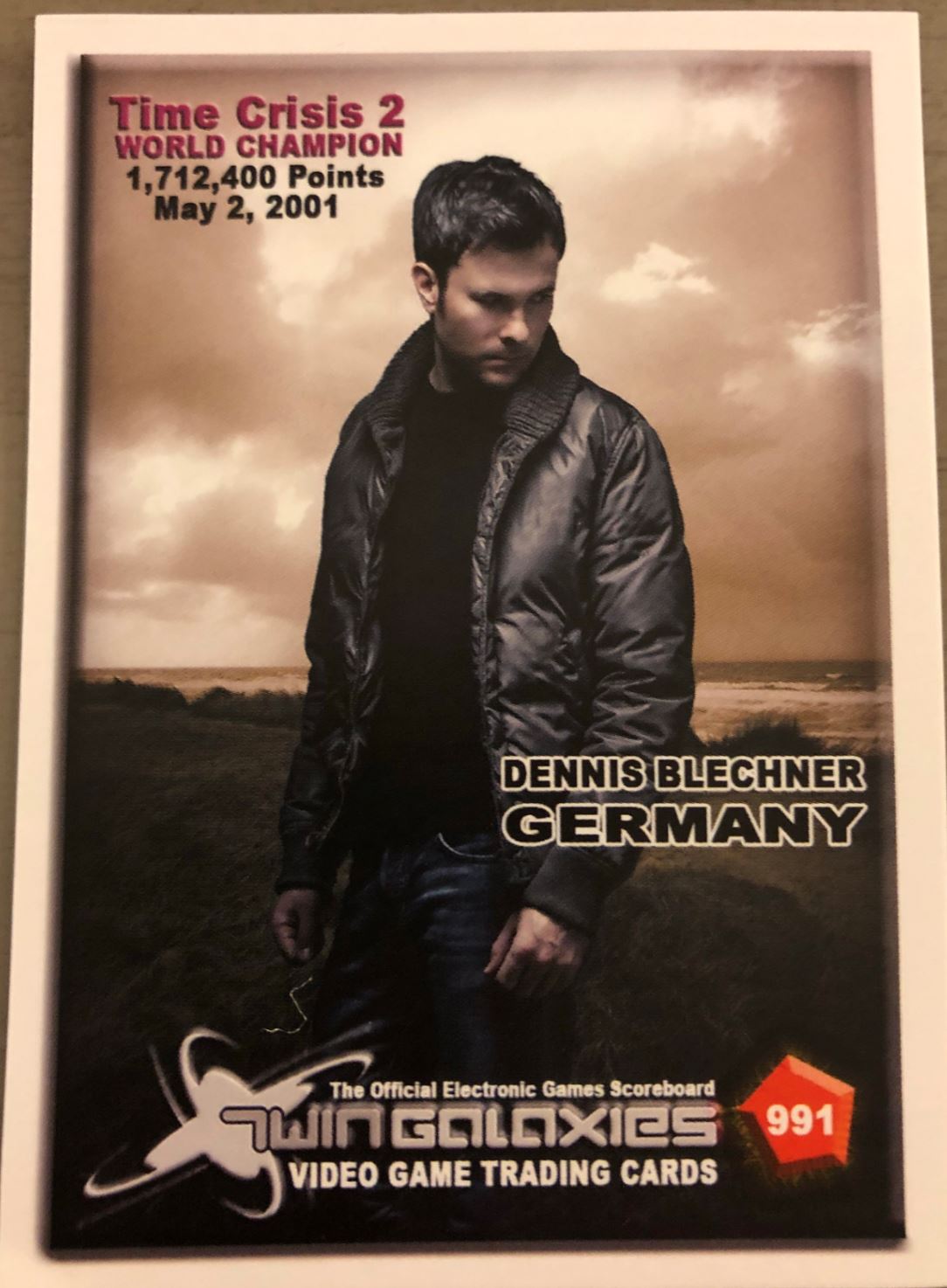 Our next Trading Card Spotlight features Dennis Blechner, who is displayed on card number 991, from the   Superstars of 2014 Collection.  Dennis is an avid gamer who loves playing such games as Tetris and Bubble Bobble.    Dennis holds many records in the gaming industry in multiple genres.   He is a record holder on Grand Turismo 1 on the PlayStation 1, In Europe, Dennis captured the title on four different tracks. He also holds the singles and doubles record on Time Crisis 2. He currently is trying to break some records on the PlayStation 4 on the game Trials Fusion.

Since the last 2 years I spend much time in playing Trials Fusion on the PS4 to get every track in platin and reach the Top 500. I liked this type of games. I often play also older games like Bubble Bobble or Streets of Rage. I really like at most games which are like arcade games to reach high scores.

It is hard to remember, because I was 3 or 4 Years old if my family get there first Atari 2600. I think it was the game Pac Man on this System and the feeling was awesome. I liked the sound of the game and that my whole family played it together.

Today´s video games are often not so hard to play as in the past. I am a fanboy of older games. Today many games are much “softer” to play. Did anyone really play Tomb Raider 3 to the end on the Playstation1 without cheating?

No, never. But I always was a kid who tried to beat every record or never to give up and play every game to the end, no matter how long I had to try.

I never met him because of the distance from Germany to the USA. But I read many things about him and we E-Mail together sometimes.

I am "only" a Player in all the games I play on different systems.

This is my Sony PSP with Homebrews on there. I love it when the intro starts, the sound, the handling of this little machine. I can play a lot of old games on it to feel a revival in my heart and mind.

Console gaming! As I grew up with an Atari 2600 and even today I have an Commodore 64, I always liked consoles much more, the arcade feeling from arcade halls.

I purchased 4 years ago my one Indiana Jones the Pinball Adventure Pin for a lot of money ;-) Also I purchased an arcade machine which emulates a lot of classic games. That was always my dream. But what a really want is an original Time Crisis 2 Deluxe Arcade, but never get it.

This is Sony because I spent so much time on the PS1 and PS2 and get experience for lifetime. But, for sure, the other 3 companies are also amazing.

In the past on the Commodore 64 it really was a battle of some people to make a perfect sound for their games and today many games have a big orchestra like in a movie. So, music today is so important in every game.

No, I tried to show my own boys how amazing it is to play video games.

Maybe young kids can be influence at violent games, but when they really do something bad in the real life I think this is the characters fold of those kid and the fold of a video game. Some people have in their nature more aggressive than others.

More alone and sometimes against friends.

Mmmhhhhh. maybe it is Konami or Namco, because they have good handling and action in their games.

I think I have a very short reaction e.g. in road traffic and so on.

For me? Yes, absolutely.

Yes, e.g. Resident Evil was really good for me as a fan of this videogame.

I think this must be Solid Snake in Metal Gear 1 on the PSX. He never gives up and tried to do the right things. But also, Nathan Drake from the uncharted series.

Long evenings with friends, the shining of the screen in my eyes and the battle between me and the games to beat them.

The Atmosphere because this is it for me to play a video game. Every game has his one character.

It´s important but not the best part of a video game.

What is your favorite singe player game and favorite multiplayer game?

Multiplayer game is bubble bobble (original arcade version) and time crisis 2 and single player game it is too hard for me to choose. Trials Fusion / Wipeout 2097 / Ridge Racer ...

This must be a game with some pieces of light gun areas, action, a story that reaches your mind and soul and a character like Captain Future from the anime series who must save the world.

I think the VR will be get closer to reality and games will get a much more realistic graphic and sound.