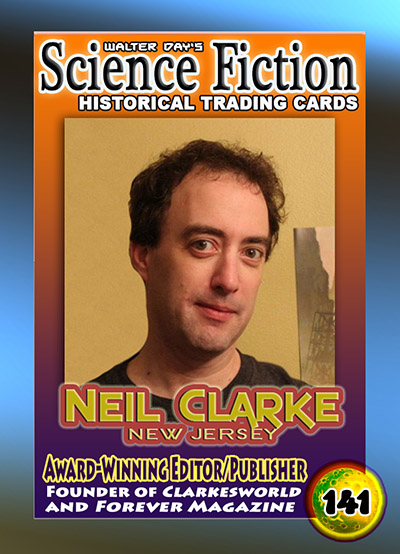 Our next Science Fiction Trading Card Spotlight Features Neil Clarke who is displayed on card number 141, from the Walter Day Science Fiction Collection.   An editor of Science Fiction and fantasy, Neil launched his own magazine in 2006 called Clarkesworld Magazine.  His team has won three Hugo awards, a World Fantasy award and a British Fantasy Award. Neil has been a Hugo award finalist himself five times.  Some of his other projects include Galactic Empires, More Human than Human and the Best Science Fiction of the Year series for Night Shade books.

I’ve always enjoyed working with talented and creative people and there’s no shortage of that in this field. It’s also nice to be in a position that allows me to help promote authors and works I enjoy. I’m never bored, and I feel like our work is appreciated. Can’t ask for much more than that.

Adventures in Time and Space by Healy and McComas will always have a special place in my heart. It was part of my introduction to SF as a young child and hooked me on short fiction. Ubik by Philip K. Dick and Deathbird Stories by Harlan Ellison were also very influential in my early twenties. Like many my age and particularly as someone entering the tech field, Neuromancer by William Gibson and Sterling’s Mirrorshades anthology were a big deal to me. After that, I’d say that magazines like Asimov’s and F&SF began having a greater impact on me. While I had my bookstore, I had easy access to a lot of different publications--including many international and small press publications. (More than I could afford to subscribe to.) Of the online magazines, SciFiction was certainly the one I looked to the most. After I started editing, I had a lot less time for novels, but one of the more recent standouts was The Three Body Problem by Liu Cixin.

If you did not become an editor, what would you be doing?

I’d still be working in education and quite unhappy about it. The area in which I had been working has been progressively moving in the wrong direction for some time now. It’s largely an administrative problem. Don’t get me started.

How early in your life did you know you would be an editor?

I started my career as an editor at forty. Prior to that--and for a considerable amount of overlapping time--I worked in education, specifically in technology. That was the career I thought I’d always be in.

Not even for a second. I always thought of it as something reserved for athletes and never aspired to being one. That said, I never thought I’d be working in this field either.

I first met Walter in 2016 at the SFWA Nebula Awards weekend in Pittsburgh, PA. I believe it was at their mass signing event.

I tend to look at SF and technology through the same lens: If it isn’t improving and evolving, it’s falling behind. That’s not a criticism of what came before because it’s on those shoulders the new works were created.

Are you still involved with editing today, and what role do you play?

I’m editing Clarkesworld Magazine, Forever Magazine, and a few anthologies each year, including The Best Science Fiction of the Year series for Night Shade Books.

Anthologies or collections. I am and always have been a short story junkie. At the moment, I’m leaning more science fiction than fantasy.

Reading is still up there. I listen to a lot of music and can be quite picky about it. I also enjoy playing video games.

Persistence, talent, and courage. I’m sure luck plays into the equation as well. The right story, in the right place, at the right time . . . there’s no way you can plan that.

I’m a former bookseller and have a large collection of physical books. One of the reasons there’s a print edition of Clarkesworld is just so I can have them on my shelf.  That said, I’ve been publishing an online magazine for over eleven years and have been designing ebooks for more than eight. I appreciate the convenience of ebooks and reserve the physical shelf for special things these days. (Signed books, limited editions, first printings of books by favorite authors.) There’s only so much you can keep in one house. Ebooks break that limit.

As a child, there was a lot of Asimov, Clarke, Heinlein, Le Guin, Herbert, etc. on my reading list. These days I’m mostly reading short fiction, so the list is a lot longer. Best to point you at Clarkesworld or my Best Science Fiction of the Year series and say “them.

Did you play video games growing up and what were some of your favorites?

I was an Atari kid. Started with the 2600 and eventually moved onto the 800. Space Invaders, Adventure, Asteroids, etc. After a long break from games, I picked up an Xbox One a few years ago. I play a lot of Destiny with the gang from Clarkesworld (Sean and Kate).

Well, they are certainly much more involved than the ones I played when I was younger. It’s nice to see more story elements working their way in, but it’s often competing against or sacrificed for the multiplayer PVP modes. There’s still a lot of room for growth there.

Do you believe some video Games are too violent and lead to violence in America today?

That’s a matter of taste. Sure, some are too violent for me, but that’s true of all media. It’s just not something that increases my enjoyment and it can come across as the cheap and lazy way out. That said, there are a lot of people who enjoy those aspects and who am I to say they shouldn’t? As for the violence in America thing, I was under the impression that that theory had been debunked some time ago. There’s much more convincing things than video games to blame for that particular problem and our inability to fix it.

For the last decade, my family and I have been vacationing in same spot on the NJ shore. In one of the arcades on the boardwalk, there’s this old Jurassic Park shooting game I’ve played every year with my youngest son. It’s not the best game, but the memories associated with it are.

Doing more of the same. I have worked in this field for eleven years and only managed to quit my day job last year. This has been my first year as a full-time editor, so I don’t believe I’ve fully-explored all the extra opportunities it’s created. I’m looking forward to doing so.