Written by Todd Friedman on 05 May 2017. Posted in Trading Card Spotlight 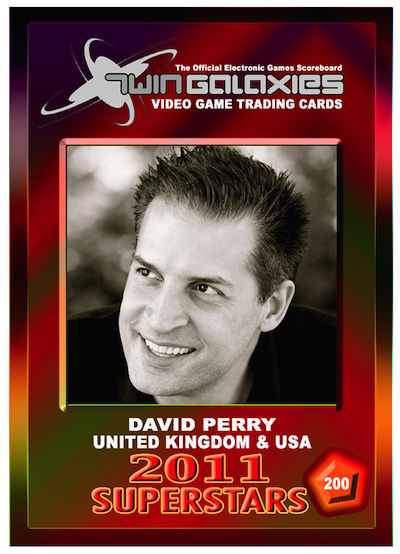 This week we look back at the very first Trading Card Spotlight.   It was David Perry of Shiny Entertainment.   This article was published on November 24th, 2015.   This was the beginning of a new trading card spotlight each week.  Thanks to everyone over the past year and half for taking part of this project and look out for more spotlights coming soon.


Growing up were you team Sega or Nintendo and why?

Sega!  They gave my team many awards, supporting all the work we did (especially Earthworm Jim) and it really helped my career dramatically.  They even packaged Aladdin with the console.

When I was young there were no arcade games near my home, but when I went to the local airport they had amazing stuff like Dragon’s Lair and the original Star Wars arcade machine (the cockpit version.)   The first video game that really stood out to me was Psion Flight Simulator for Sinclair ZX81 (Timex Sinclair 1000 in the USA.)  How they pulled that off in 1982 was simply stunning.

I love racing games, not the purist simulations of driving, more the “Crashing into stuff is OK!” kind of crazy racing.  I love space and flight simulations.  The game I’ve played the most recently is Diablo III on PlayStation 4.  I hit level 45 in just a few sessions.

Games today are pretty incredible; the complexity is leading to endless new jobs.  When I started we did everything, music, art, programming, design.  Today there are specialists in cloth simulation, lip movement etc.

My favorite Video game journalists care passionately about games and how they come about.  They’d do their job for free and the knowledge they acquire over 20+ years is pretty breathtaking.

No, my mother wanted me to be a dentist, I wanted to be an airline pilot, and video games weren’t really a “thing” back then.  (Especially in Northern Ireland where I grew up.)

Walter reached out to me and when I met him he gave me my cards and a poster at a “Video Games Live” concert (on stage during the E3 conference.)

Passionate -He’s incredibly passionate about this, and I’ve had other people ask me to sign the cards so people clearly care about his work.

There was an old device called the Sega Nomad, it was shocking as all previous handhelds were like a “light/weak” version of a console.  (Game Gear is a good example.)  Nomad was the same as a Sega Genesis to-go.  I found mine the other day and started playing California Games on it.  My old Sega Genesis is packed away somewhere so it’s cool this retro handheld still works.

I feel that Games are like music.  People that don’t think they like video games just haven’t found the right game yet.  When they do it will touch their soul just like their favorite music album.  They look at kids and wonder why they love games so much…  They simply have taken the time to find a game they fell in love with.

I prefer console gaming as its less work to manage.  I put a 2TB drive into my PlayStation 4 and gaming is now effortless.  PC is less predictable as there’s so many cooks in the kitchen with video card drivers, Windows, DirectX, game services etc.  That said I’m old-school and find myself more deadly with a mouse and keyboard for first person shooters, so I end up playing everything across many devices.  It’s my job really to experience everything.  I’m on a judging panel each year for the AIAS Awards during the DICE conference and that basically has me playing all the best games of the year, every year.

I’m a fan of companies that swing for the fences and that’s why you see them do so well, companies like Sony, Activision, EA, Ubisoft etc.

I have worked with Hollywood multiple times…  Aladdin, The Terminator, The Matrix etc.  In the old days video games were treated like coffee cups, you’d license the movie and go and make your product.  These days the directors grew up playing video games, they are excited to be involved in the process and that changes everything.  So as the talent in Hollywood becomes more game-savvy over time I’d expect to see more amazing projects and collaborations.  This is an $80B industry and I personally believe they can add value.

We are on a path to immersion, where you feel like the room you are in isn’t where you are.  Meaning when you leave the game you return to the room you’re really in.  That sounds weird but it’s something VR developers are calling “presence”, it’s when your brain sees a robot that you’re certain it’s really there.  So immersion and also the AI has to improve dramatically…  “Welcome to town traveler” gets said today even if you pull a gun on the guy!  In the future we need to make dramatic progress on the intelligence of the game characters.  Meaning, speech recognition, cognition, generation etc.