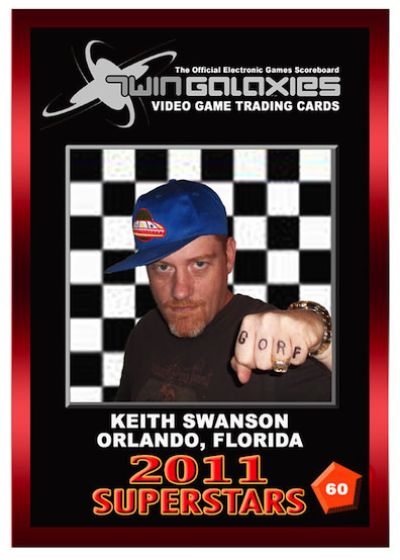 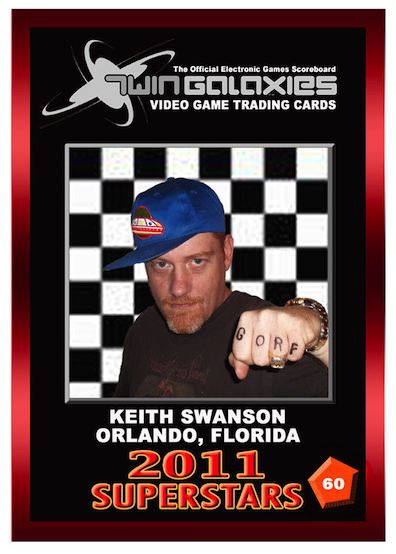 Our next Trading Card Spotlight features Keith Swanson, who is displayed on card number 60, from the Superstars of 2011. Keith is also featured on cards 972 and 1825.  Keith is the world record holder of the arcade game Gorf (3 ships).  His score of 1,129,660 was set in 2011.   Keith also is currently in second place for the Gorf (6 Ships).   Also, known as the “Arcade Doctor”, Keith owns his own arcade and pinball repair business in the Orlando, FL area.  He enjoys keeping the games of yesterday and today running for gamers all over to enjoy.   Keith’s next big project is to open up a video game bar in Florida.

If I designed a game it would be named after my business "Arcade Doctor".  The game would be made similar to Donkey Kong instead of a plumber as Mario, it would be an arcade technician as a character and have similar but different levels such as in Donkey Kong.  Maybe I will do that sometime in the future.

The first time I met Walter in person was at Billy Mitchell's King of Kong Arcade (no longer there) in the Orlando airport in 2011.

Brilliant. Just for the many things he has done in his life. The founder of Twin Galaxies the official video game world record scoreboard, the many tournaments he has run. He is always full of ideas.

My first video game played was pong on a home console system. My first arcade game played was Space Invaders when I was 10 or 11 years old. My parents used to own a vacation home which we lived in during the summer months. Great place as it was a lake front property, learned to swim and waterski there. I used to ride my bike to a camping grounds nearby that had an arcade. It had a lot of EM pinball and EM shooter games and no video games at the time. I was going there regularly to play those games and then one day Space Invaders arrived, I remember a crowd of people surrounding that machine and the loud thumping noise that game made. I think I had to wait a week before I got the chance to play as it was always being played by someone. It was an exciting time as I never quite seen a game like that before. Ever since then I got hooked on video games.

I like the video games of today also but many of them have too much of a story line script and not enough game play. I like the old games better because of the instant action and the simplicity of them. If you are going to be any good at many of the older games you need have great hand eye coordination, fast reflexes, and amazing concentration.

I own many classic arcade games but if I could only own one it would be GORF. Have it handy just in case someone beats my world record on it.

I liked both about equally. Both put out some amazing games.

What does it take to be an arcade repairman?

For one thing Patience, a lot of learning of the different systems and how they work, a good knowledge in electronics, and you must have a love for it. Otherwise it will drive you nuts.

Are video games aimed mainly at children, adolescents, or adults?

I think they are aimed at all ages.

Do you believe some arcades are too violent and lead to violence in America today?

A lot of games are violent but do not believe they lead to violence any more than anything else.

Which company makes the best games and why?
​ I think the best company that made games was Williams. The quality and game play of the Arcade Video and Pinball games they made surpasses everyone thus far.

Yes you can learn from playing games. Such racing simulators you learn a lot about different car set ups, and what you need to do to make a faster run. You can learn about history as many games are based on past events.

Yes playing the games for fun is very stress relieving I find. If playing them to accomplish a world record that is another story. "Very stressful"

Mario I would have to say. Started way back in Donkey Kong and is still in games today.

Of these five elements video games, which is the most important to you and why? Gameplay, Atmosphere, Music, Story, Art style

Gameplay for sure. The harder and more challenging the game is the more I like to play them.
​I am very competitive and enjoy the challenge.

What is your favorite singe player game and favorite multiplayer game?

Gaming is my life. I own my own business "Arcade Doctor" which is a Video game and Pinball repair service. Every day I am traveling around the Orlando area repairing broken games. I am responsible for keeping many of these older games alive today. I am also in the process of opening a Video Game Bar. I wish I had more time to play the games but most of the time is spent fixing them.

I think most Video games will be virtual reality base games in the future. Video gaming will always be around in some form or another.