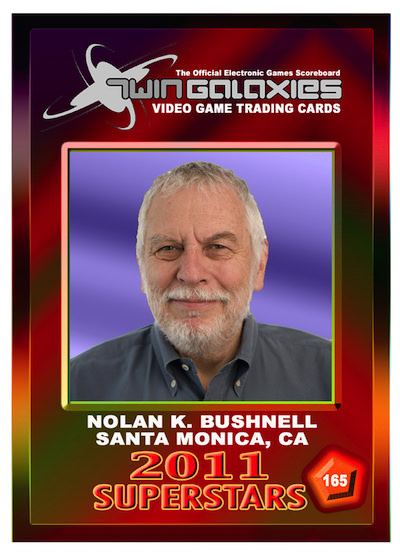 Our next Trading Card Spotlight features Nolan Bushnell, who is displayed on card number 165, from the Superstars of 2011 Collection.  Nolan can also be seen on card number 821 and 1333.  Nolan is the founder of Atari and Check E’ Cheese as well as over 20 other companies in his career.  Nolan is a pioneer in the industry and has been influential to millions of people across the globe.   He was named one of Newsweek’s “50 Men Who Changed America”.   To this day Nolan is still working on new designs for the industry.  On August 9th, 2010 Nolan Bushnell was inducted into the International Video Game Hall of Fame in Ottumwa, IA.  You can see Nolan in dozens, if not more, documentaries about gaming or video game related material.   Some of those include Atari: Game Over and Video Games - The Movie.

My first electronic game development was modifying electromechanical games so they could operate in an amusement park setting where players could win tickets.  The other game I designed strictly in software on a large mainframe that had a video display was the game of Fox and Geese.  It was sometime in the winter of 1967 at the University of Utah. 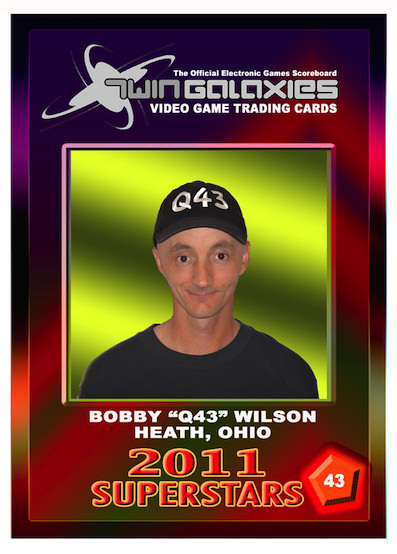 Our next Trading Card Spotlight features Bobby (Q43) Wilson, who conveniently displayed on card number 43, from the Superstars of 2011 Collection.  Bobby is also on other “43” trading cards such as 1043, 1143, 1243, 1343, 1943.   Bobby can also be seen on card number 1610.   Bobby has held many world records on the Sega Genesis as well as MAME related games.  Bobby’s biggest video game accomplishment is his perfect game on Rock ‘N Roll Racing, a rare Super Nintendo cartridge where Bobby won all 144 races and scored 57,600 points.

I’m sure the programmers/ creators want everyone from 3 - 143 playing their games. Never a good idea to limit your customer base. I do however see games created specifically for a target audience. I find the best games appeal to all age groups. 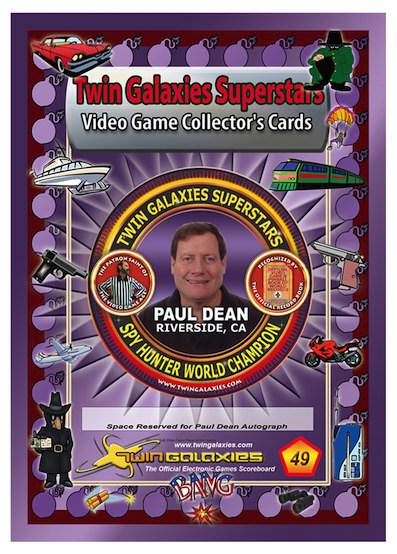 Our next Trading Card Spotlight features Paul Dean, who currently is displayed on card number 49, from the Superstars of 2011 Collection.  Paul is also featured on card number 2108, from the Superstars of 2015 collection.   Paul has had many Video game accomplishments in his career such as a 41 hour marathon of the game “Frenzy” in 2005.   In 1985, Paul broke the world record on the Arcade game “Spy Hunter” which still stands today.  Paul’s score of 9,512,590 is still the only million points or higher game recorded for Spy Hunter.  You can see Paul each year at the California Extreme Expo, which he runs various competitions open to the public.

Yes, I still compete from time to time as well as run high score contests at California Extreme and at the Arcade Expo. I have been running high score events since 2006 and it has been a lot of fun getting the players back together each year to compete.  I have done video game panel discussions and events at the Ottumwa Iowa Big Bang, California Extreme, Banning Arcade Expo, San Diego ComicCon, Portland ComicCon, E for All, E3, The Kong OFF 2 & 3 and the Seattle Northwest Pinball and Arcade Show.  I also have a web site named spyhunter007.com which covers a lot of the competitive history of video gamer's and I post to the CAGdc classic gaming forums run by Mark Alpiger. I also follow the new Twin Galaxies site run by Jace Hall and I am a member.

Written by Todd Friedman on 30 March 2016. Posted in Reviews 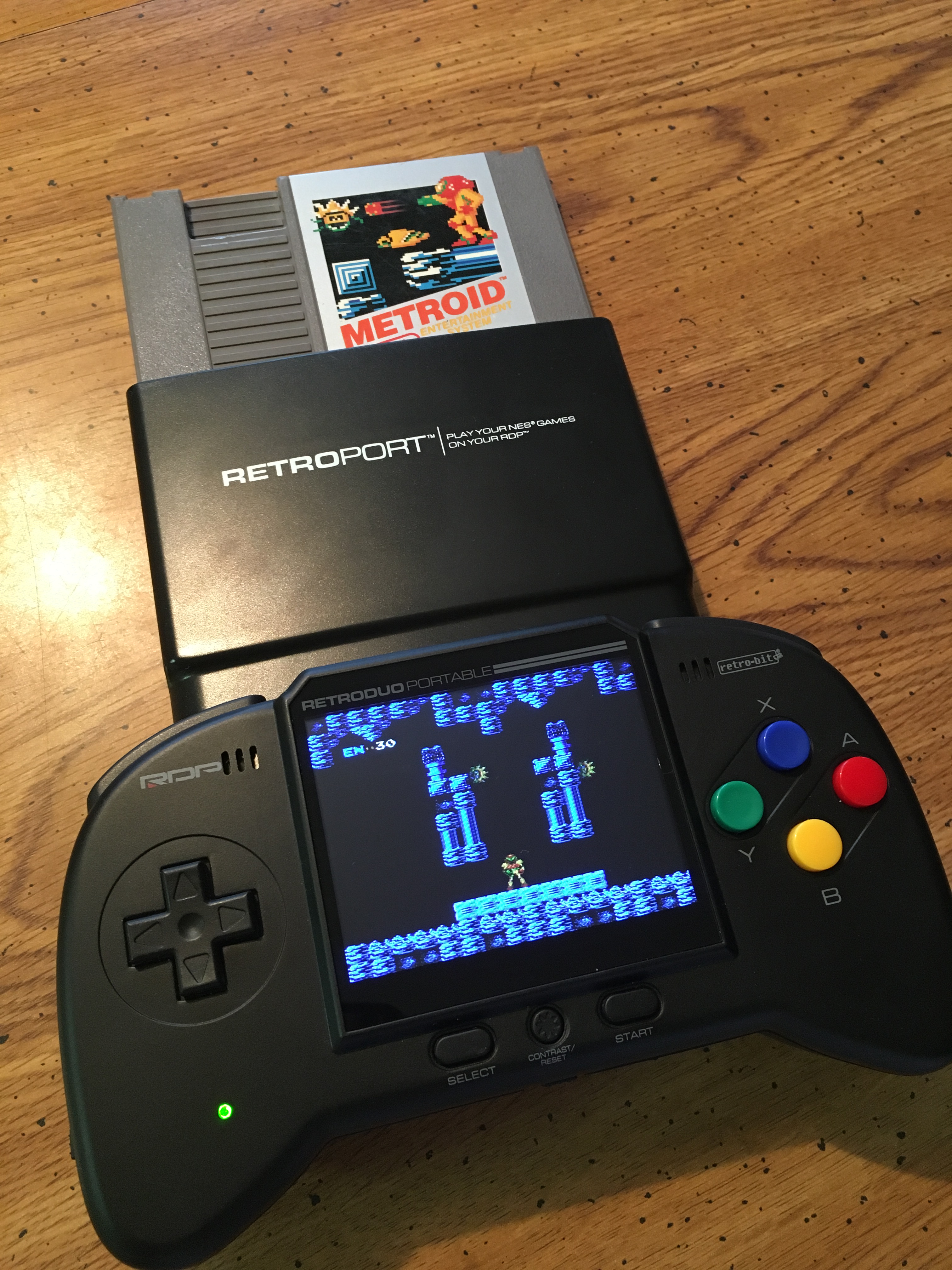 This is the review of the RDP RetroDuo Portable V.2.0 handheld system.   This is a fairly new item that has been on the market less than a year.    I have purchased this item with the excitement of playing the original classic Nintendo and Super Nintendo games on a portable handheld device.

There are many recycled versions of classic Nintendo and Sega games on Gameboy, Wii U Shop, Xbox Live, PlayStation Network and MAME, but to me there is nothing like playing the original cartridge that was played back in the 1980s and 1990s.  I do own the systems and controllers from back in the day but most of the time they are stored away or unplugged.   With this new portable device it’s easy to turn on the classics and play them anywhere.  There is no TV required.  When I first saw this item online, I immediately got excited and had a vision of myself playing The Legend of Zelda in my backyard on the deck or in the bedroom at night with headphones so no one was disturbed. 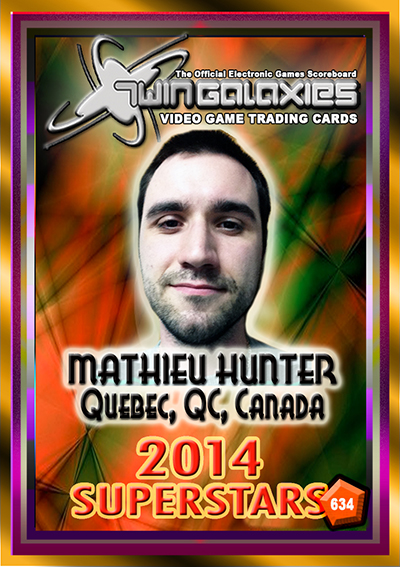 Our next Trading Card Spotlight features Mathieu Hunter, who currently is displayed on card number 634, from the Superstars of 2014 Collection.  Mathieu is currently working as a game tester in Canada, which he has been for the last 5 years and is aspiring to get into game design.  Mathieu held a previous world record on the original Super Mario Bros (Super Mario All-Stars version).  He loves to do speed running record attempts and he also showcases this ability in video gaming events all through Canada.  Mathieu also has a hobby in skateboarding.

Super Mario Bros/Duck Hunt when I was three. Me and my brother were at some daycare at a fancy restaurant and we played there while my parents had diner. I don't remember much about this first experience aside that I loved playing these games.